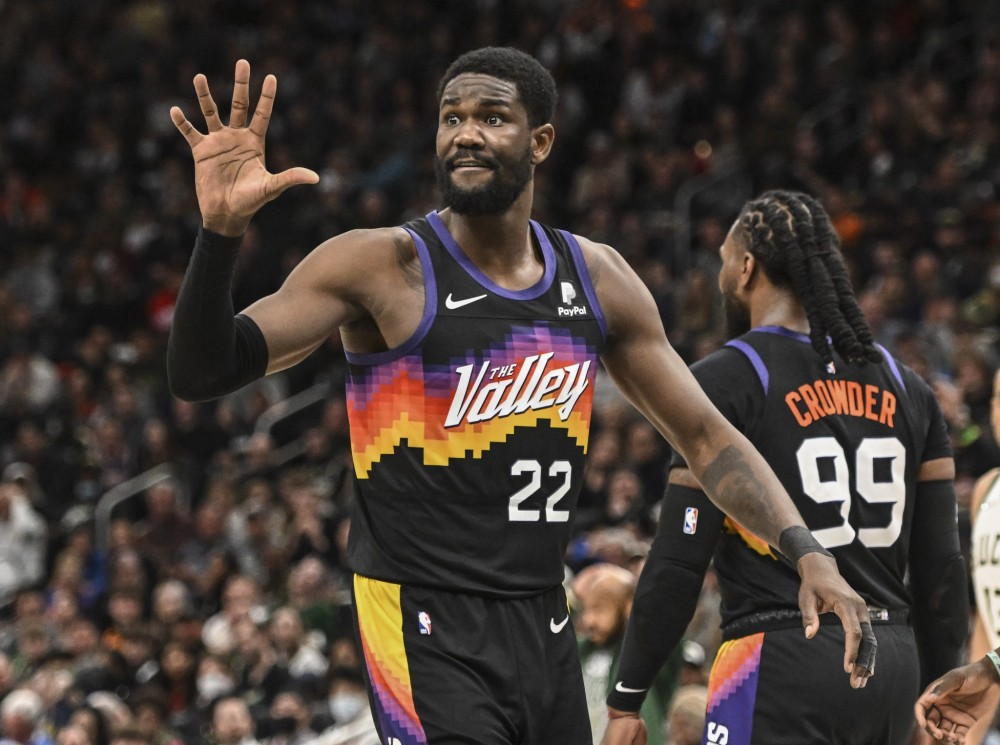 When Deandre Ayton and the Phoenix Suns couldn’t come to an agreement on a rookie scale contract extension, it was fair to question the commitment from one party to the other. While the breakdown seemed to be more about years than dollars, there was still a gap that couldn’t be overcome.

Now, Ayton is wrapping up his best season, while the Suns have rampaged to the NBA’s best record. That begs a chicken/egg set of questions: Is Ayton good because of the Suns? Or are the Suns good because of Ayton?

As with most things, the answer probably lies somewhere in between. Ayton has obviously benefitted from playing with Chris Paul, Devin Booker and Mikal Bridges and in the Suns system. But Phoenix has also clearly benefitted from having one of the game’s best young centers as their paint anchor on both ends of the floor.

So, where does that leave things for Ayton’s next contract? There are really only a few options to choose from. Let’s break them down.

We broke this down as a potential option for Zion Williamson in a previous piece. Given Williamson’s health issues, it’s not a lock that he and the New Orleans Pelicans will reach an agreement on an extension. That could put him in the same spot as Deandre Ayton is now.

For Williamson, that’s a next year thing. For Ayton, he’s here. But to sign the qualifying offer would signify that Ayton’s relationship with the Suns is unsalvageable. It doesn’t seem that’s anywhere close to the case.

But for posterity’s sake, if Ayton were to sign the qualifying offer for 2022-23, he’d be on a one-year deal worth $16,422,835. Following that deal, Ayton would be eligible for unrestricted free agency.

Even in a depressed market for free agents where only five teams may have cap space, Ayton can command far more than $16.4 million for next season. Again, unless things have hit a point with Phoenix where he has to get out, Ayton won’t sign the qualifying offer.

Signing an Offer Sheet with Another Team

Using the most recent cap projection of $121 million for 2022-23, Ayton will be eligible for a first-year salary of $30,250,000 with either Phoenix or another team via offer sheet. Unless Ayton surprisingly makes All-NBA (not going to happen given the depth of the center position this season), there’s no chance Ayton will jump up a tier as a Designated Player.

Here’s what a full max offer sheet would look like with another team:

That’s the max another team could offer Ayton. An offer sheet has to be for at least two seasons (not including any option years), but to have any shot at getting Ayton, a team would have to give him a full max offer sheet. That’s the deal above, starting at the max salary with 5% raises. It’s also likely the deal would include a player option on Year 4, a 15% trade bonus and likely some up-front actual payments (these do no impact the cap hit). Essentially, all the bells and whistles to make the Suns think about matching or not.

This is also the max deal Ayton could receive via sign-and-trade. That’s probably the more likely path, as if the Suns weren’t going to match, they’d rather receive something for their troubles for their talented young center. But if Phoenix wasn’t going to play ball, and they forced Ayton’s hand, he could go the offer sheet route as a restricted free agent.

The Full Max with Phoenix

This is what Ayton wanted during extension negotiations. Reporting at the time was that the Suns had no qualms about giving Ayton the max salary, but they did not want to go to a fifth year. Ayton’s camp was insistent on the five-year deal and that’s where things broke down.

Because this is likely to be starting point in negotiations this summer from Ayton’s side, here’s what the full max deal looks like:

That’s a five-year deal starting at the max with 8% raises. It’s also likely Ayton would want a player option on that fifth year, simply to be able to get back on the market as a 28-year-old in 2026. At that age, and as a center, Ayton would likely be hoping to land one more max deal. Whether he would get that is a question, as player options on five-year deals are generally reserved for All-Stars who are pushing All-NBA level.

Let’s say the Suns won’t budge and give Ayton that fifth season, but he still wants something in exchange for signing a four-year deal, there is a compromise we could see. It would be a four-year max deal, but with a twist:

That’s a four-year deal at the max salary with 8% raises. Where the twist could come in is that Ayton could demand a player option on the fourth year. That would allow him to get back on the market before his age-27 season, while also freeing the Suns of the five-year commitment.

This isn’t perfect because it leaves Phoenix exposed a bit, but it’s possible that both sides could get to this point.

You’ve probably thought a little bit about the chicken/egg questions by now. Is Deandre Ayton a product of Monty Williams and the Suns? Or are the Suns driven by Ayton?

But there’s another set of questions you have to answer now. They existed this past summer, when extension negotiations played out, but now there’s a little more data.

Is Ayton better now than he was a year ago? Have his production projections over the next four to five seasons changed at all?

As of this writing, Ayton has played in 54 of 75 games this season. He’s missed time with injuries, but when healthy he’s been productive. Ayton’s counting stats are down a bit, but that’s more a reflection of the Suns overall improvement as a team, as opposed to anything Ayton is doing.

And it’s that overall improvement that has to be factored in as well. Do the Suns need Ayton? Or can they redirect that money elsewhere and bet on the players currently on the roster to pick up the slack, while cobbling together the center position?

Phoenix has just over $128 million committed to next season’s team for nine players, and that’s before re-signing Ayton. That leaves the Suns $19 million under the tax line. With that many roster spots to fill, plus re-signing Ayton, makes it very likely Phoenix will be a tax team next season.

But that’s a short-term issue. And there are remedies that can be taken to lessen the tax bill, if not duck out of the tax entirely. If necessary, the Suns can salary-dump a contract or two to get down around the tax line.

But long-term, the cost of the roster is increasing. In 2023-24, the Suns have just a tick under $68 million committed to just Devin Booker, Mikal Bridges and Landry Shamet. In addition, they’re on the hook for at least $17.8 million for Chris Paul and Cameron Payne, but that’s only if Phoenix waives the veteran point guards. If they keep them, that overall salary commitment rises to $105 million for five players.

And the above doesn’t factor in a new deal for not only Ayton, but also rising forward Cameron Johnson. You could say they could let Johnson walk, but that would presumably mean re-signing Jae Crowder and his contract, you guessed it, expires after the 2022-23 season.

So, Phoenix has to balance the short-term against the long-term. Short-term, maxing out Ayton is basically a no-brainer. The team even seemed to think so, as they reportedly made that offer.

Long-term, you better be really certain that the trio of Booker, Bridges and Ayton is ready for more as Paul eventually declines. Otherwise, you get locked into a roster that is good, but not quite good enough.

We don’t know yet if the Phoenix Suns will win the 2022 NBA Finals or not. By the time they’ll have to re-sign Deandre Ayton, the Suns will know if that happened or not. They’ll know if it’s a “keep the band together” situation. Or if it’s a “time to head in a different direction” circumstance.

Look for Phoenix to make a deep enough run, with Ayton being a major part of it, that they’ll give him the full five-year max. That may lead to paying the piper down the line, but that’s a question for another day, and hopefully one you answer after raising the franchise’s first banner.

Do the Thunder Have Too Much of a Good Thing?