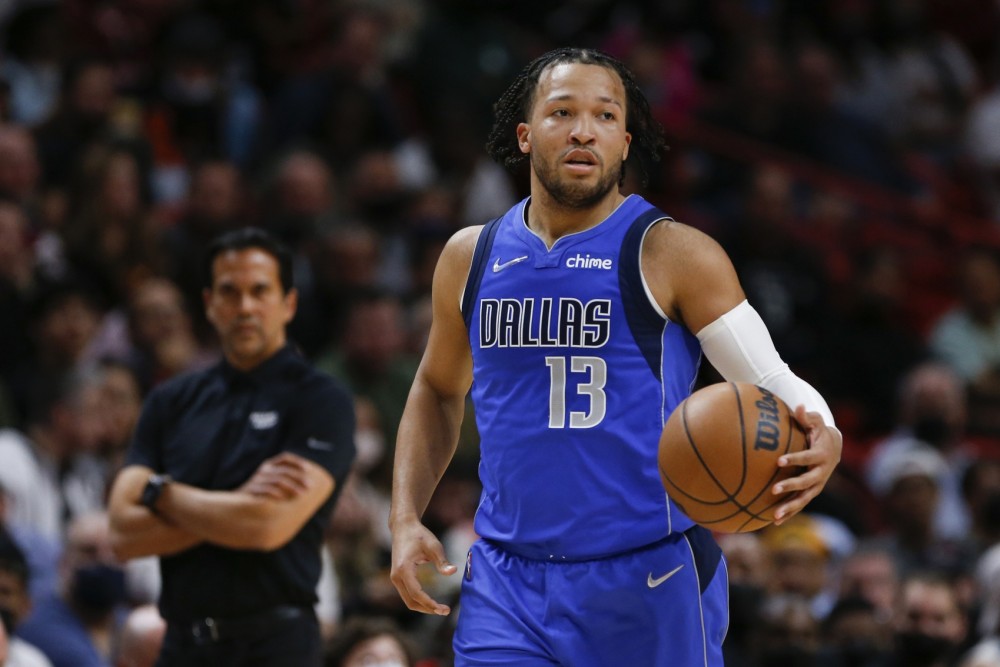 At the trade deadline, the Dallas Mavericks shed themselves of Kristaps Porzingis’ salary, but replaced it with two salaries of total similar value in Spencer Dinwiddie and Davis Bertans. Those two deals, combined with Luka Doncic’s Designated Rookie Extension, Dorian Finney-Smith’s recent veteran extension and other salary obligations have the Mavs set up to be in “luxury tax hell” per Mark Cuban.

Despite having nearly $137 million committed to their 2022-23 roster, Cuban says the Mavericks intend to do “whatever we have to” to keep guard Jalen Brunson. This seems to be true even if that guaranteed salary figure grows to over $151.5 million, pending roster decisions for Trey Burke, Maxi Kleber and Frank Ntilikina.

For reference purposes: This season the Golden State Warriors have a guaranteed salary amount of grater than $175.8 million, while the Brooklyn Nets are carrying more than $168.8 million. Factoring in a re-signed Brunson, and the Mavs will be in range of the priciest rosters in NBA history.

But before we get there, let’s examine what Brunson’s options for his next contract are. He’s got a handful of ways he can go, either before this season ends or this summer.

If Brunson and the Mavs wanted to, he could sign a veteran extension today. This type of extension goes by many nicknames, but for our purposes here, we’ll call it “The Dinwiddie” in honor of Brunson’s now teammate, Spencer Dinwiddie.

Because Dallas has full Bird rights for Brunson, but because his current salary is under the estimated average salary ($10,335,000), he can sign an extension with a pretty healthy raise. As a point of order, this is exactly what teammate Dorian Finney-Smith just did when he signed his version of “The Dinwiddie”.

This type of extension allows for Brunson to sign for 120% of the estimated average salary, then to get 8% raises on top of that first-year salary.

Here’s how it would look salary-wise:

In Finney-Smith’s case, he got a player option on his final season and he also got a 5% trade bonus in his extension.

Now, this deal worked for Finney-Smith, as it worked for Dinwiddie and others. But those who signed this type of extension weren’t quite at Brunson’s level as a player. Dinwiddie is a good comp for Brunson, as both are somewhat similar as score-first point guards, who have been solid secondary-playmakers.

When Dinwiddie signed his extension, he was in the midst of a season that saw him average 16.8 points and 4.6 assists per game. This was after a breakout season with the Brooklyn Nets, where Dinwiddie averaged 12.6 points and 6.6 assists per game, but on 39% shooting from the field, including 33% from behind the arc. In addition, Dinwiddie had a prior injury history to consider, as he had previously torn his ACL.

This year, Brunson is averaging 16.3 points and 5.4 assists. Last season, Brunson averaged 12.6 points and 3.5 assists. But he’s a far better shooter than Dinwiddie, as he hits 49% from the field and 37% from three for his career. Also, there are no serious injury concerns with Brunson either.

Add it all up, and Dallas got one potential bargain with Finney-Smith on “The Dinwiddie”. They won’t get another one with Brunson, as he’d be leaving too much money on the table.

The Max Deal With Dallas

Let’s preface this by saying that Jalen Brunson isn’t a max player. Barring a massive playoff run where’s he’s a huge part of leading the Mavericks to the NBA Finals, Brunson won’t approach max money. But, for posterity’s sake, here’s the projected max deal Brunson could ink with Dallas this summer:

That’s the 0-6 Years of Service five-year contract, max contract. It starts out at the first-year max with 8% raises.

Yes, that’s too rich for Dallas. Signing Brunson to such a deal would put the Mavericks in range of the Golden State Warriors payroll for this year. That’s too much for a team that has yet to advance out of the first round with this core group of players.

The Max Deal With Another Team

Could Brunson leave Dallas for a max deal somewhere else? It’s possible. The challenge is that only a handful of teams project to be in range of offering Brunson a max deal this summer. But there are always ways of clearing salary and, of course, sign-and-trades.

If, say the Detroit Pistons decide Brunson is the guy they need next to Cade Cunningham, they can do a max deal for Brunson. If the New York Knicks, one of Brunson’s long-rumored suitors, were willing to give him a max deal, they could arrange a sign-and-trade to send a couple of contracts back to the Mavericks. Or they could rope in a third team to help facilitate a deal.

If Brunson were to change teams on a max deal via straight signing or via sign-and-trade, here’s what that projected max contract would look like:

That’s the same starting maximum starting salary Brunson could get from the Mavericks, but with only 5% raises in the subsequent seasons.

It’s likely that’s too rich for another team. Again, Brunson is a really solid player, but he hasn’t shown he’s a maximum player. Nor has Brunson shown he can be the number one option on a playoff team, which a max player should be.

This is where things get interesting. There’s about $18 million in wiggle room between “The Dinwiddie” extension Brunson can sign and the maximum amount Brunson can get as a free agent.

And almost right in the middle is the sweet spot for Brunson.

Looking at the teams who have a need at point guard this summer, combined with the Mavs desire to keep Brunson, you can start to formulate what it’ll take to pull him away from Dallas. Or for the Mavericks to re-sign him long-term.

Given that Detroit (via cap space) or New York (via sign-and-trade) could both easily do deals averaging $20 million or so, that seems to be the baseline for Brunson. Something in the four-year, $80 million range seems fair for both player and team.

For Dallas, that type of deal could look something like:

For Detroit or New York (or anyone else), to get to similar total money, they’d have to up the first-year salary by a bit. That would leave them looking at deal similar to:

Given Brunson’s age, production and projections to continue to be a solid player through his late-20s, those deal structures seem fair for both player and team. Now, if Detroit or New York (or anyone else) wanted to pull Brunson away, they could always go a little bit higher with their offer.

For the Pistons especially, given their potential cap space, this summer is bereft of quality free agents. If they want to spend some of their projected $31.4 million on a long-term point guard option to grow with Cade Cunningham and their young roster, they’d do worse than starting Brunson out at something even as high as $21 million in first-year salary. That total deal would look like:

Yes, that might seem a touch high, but to get players to change teams, especially to a rebuilding one, sometimes you need to up your offer. Given the cap is projected to continue to rise, $23 million and $24 million doesn’t seem too extravagant for a solid point guard, who will be entering his prime years in 2024-25 and 2025-26.

Jalen Brunson is going to get paid this summer. The Dallas Mavericks won’t get him on a steal of a deal via “The Dinwiddie” extension, but they won’t have to max him out either. If Mark Cuban is prepared to go deep into the tax, something like the four-year, $80 million option we laid out above should be enough. But if Brunson wants to maximize his non-max payday, he could use the Detroit Pistons cap space to get himself a bigger deal.

Given the lack of quality free agents, but also lack of need for point guards around the NBA, Brunson should land right in the middle of “The Dinwiddie” extension and a max deal. And that’s a contract that should retain positive value as Brunson ages, while also putting him in position to sign a lucrative third contract when it expires.