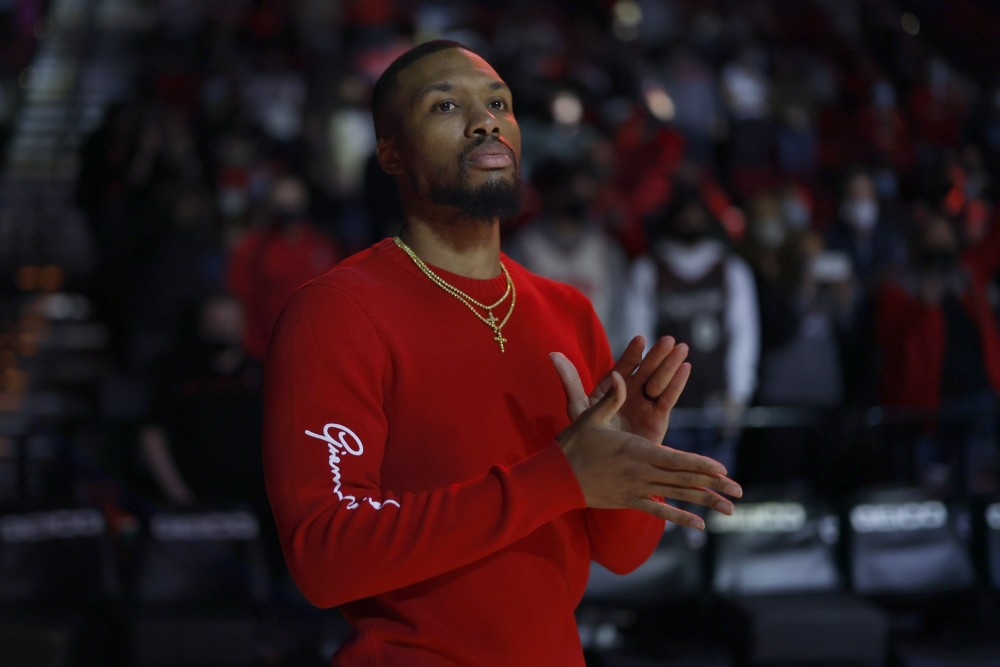 Damian Lillard’s future with the Portland Trail Blazers has come into question in recent days. During the preseason, Lillard shut down speculation that he’d ask for a trade. With Portland firing basketball operations leader Neil Olshey, and the Blazers continuing to struggle, that speculation has ramped back up again.

There are reports that Lillard still doesn’t want to ask for a trade, but that he’d like Portland to make roster upgrades. This may even include acquiring Ben Simmons from the Philadelphia 76ers. But that’s stuff Lillard would like that is largely out of his control.

Where Lillard has a little more sway is that he apparently wants a contract extension. As it stands today, Lillard is under contract through 2024-25 (that season is a player option) for a total of $176.3 million. This summer, Lillard wants to add two more years to that deal for a whopping $106.5 million.

Lillard has to wait until this summer to extend, because that will get him the necessary amount of time clear from signing his current extension. Until this point, the Trail Blazers have always been happy to play ball with their franchise player. What he wants, he gets. It’s unclear if that sort of synergy will continue. And if Lillard doesn’t get the extra years tacked on, it could turn into a trade demand.

On one hand, Lillard is a superstar. Single-season salaries north of $50 million seems shocking at this point, but you have to consider the landscape. By the time those two seasons at $51.2 million and $55.3 million would kick in, the cap is projected to be well-above $130 an $140 million respectively. In short, salaries of $50 million or more per season are going to be commonplace for superstar players, so get used to it.

However, that’s where you have to look at the other side. Lillard is already a 31-year-old small guard. He’s had some lingering injury issues in recent seasons, and this year his play has slipped quite a bit. Is that just a blip, or is Lillard about to join the long list of small guards who lost it after their age-30 season?

Taking it a little further, Portland would be paying Lillard $51 million and $55 million in each of his age-35 and age-36 seasons. That’s a scary proposition. The last thing you have to factor in when thinking about a Lillard extension is tradability. There are some executives around the NBA hinting that they would have more interest in the Portland front office opening, if they knew they wouldn’t have to guarantee extending Lillard. Everyone has seen how immovable John Wall’s $91 million remaining salary has been for the Houston Rockets. No one wants to sign up for that scenario with Lillard in four years.

For some teams, having Lillard locked up for the next five to six years might increase their willingness to trade for him. That’s control over the rest of the career of a superstar player. That’s enticing to some, especially markets than can’t traditionally attract star players. Others may be willing to trade for Lillard on his current deal, wait the year necessary per the CBA and then give him his desired extension themselves.

For other teams, Lillard locked in for $282.8 million through 2026-27 is completely unpalatable. Sure, you’re likely getting All-Star level production for at least the next few years, but those last few years look scary even this far out.

Portland’s new GM is going to have their hands full right from the jump. It’s either lock into the franchise player long-term and retool the roster around him. Or it’s trade away a beloved son from a small market and hope you get the ensuing rebuild correct. Talk about being caught between a rock and a hard place.