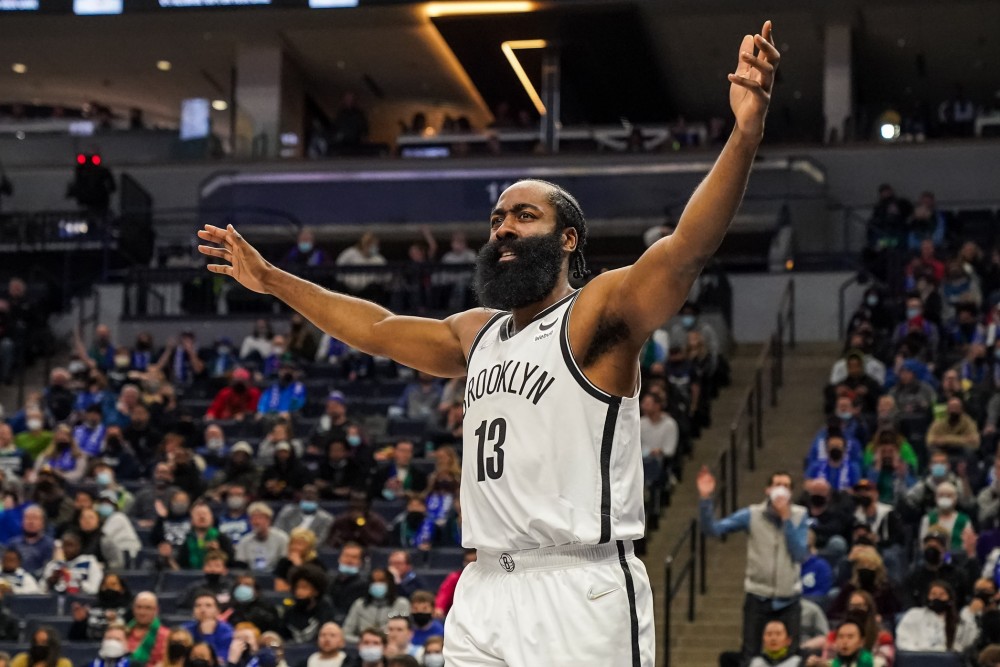 There is a lot of reporting around the NBA that James Harden isn’t a lock to stay with the Brooklyn Nets following this season. Harden didn’t sign a contract extension before the start of the season, so that’s left the door open to speculation about what his future holds.

To add to the natural questions that come with any possible free agent, Harden has a readymade suitor waiting to acquire him.

The Philadelphia 76ers and President of Basketball Operations Daryl Morey are known to want Harden. Philadelphia tried to land him last season, when Harden was traded from the Houston Rockets to the Nets. Morey and the Sixers don’t want to miss out a second time.

That gives Harden some flexibility with his next contract. It also gives him some flexibility in picking a destination. Well…to some extent. If Harden wants to get to Philadelphia, he’ll likely need Brooklyn and General Manager Sean Marks to play ball.

Let’s break down each of the possibilities for Harden, both before next week’s trade deadline and this summer.

The Straight Trade This Season

The 76ers would love to swap Ben Simmons for James Harden right now. That would allow Harden and Philadelphia to reach an agreement on a new contract in whatever form they wish. The options open to him with Philadelphia would be the same as they are with Brooklyn.

The challenge? The Nets are title contenders. So are the Sixers. Brooklyn isn’t going to help Philadelphia massively improve their immediate championship odds. The Nets would have to be enamored with Simmons, both for this season and beyond, to even consider it. And that doesn’t seem to be the case.

Basically: Forget about any sort of Harden trade happening in the next week or so.

Opting Out and Signing Elsewhere

We’re going to knock this one out very quickly, because it’s highly unlikely.

First, only three teams project to have cap space this summer (Detroit, Orlando and San Antonio) and none look like they’ll have enough space to give Harden his first-year maximum of $46.5 million.

That leaves Harden with a sign-and-trade as the possibility to change teams as a free agent. Because his salary for this season is above the maximum salary, Harden is in a unique position of being eligible to sign with another team for the same first-year salary as can get from Brooklyn. However, if Harden changes teams, even via sign-and-trade, he’s only eligible for a four-year contract vs the five-year deal he can get from the Nets. He’s also limited to 5% raises if he changes teams vs 8% if he re-signs with Brooklyn.

Here's what opting out and changing teams would look like for Harden:

That’s leaving over $69 million on the table vs signing a five-year deal with the Nets. And it still involves Brooklyn helping Harden leave town. And the acquiring team would immediately become hard capped at approximately $151 million in team salary for the 2022-23 because they acquired Harden via sign-and-trade. That’s makes building out a contending roster extremely difficult.

Of all the options, this path is the most unlikely after a straight trade in the next week-and-a-half. This is because of the complexities involved with changing teams, as well as Harden leaving so much money on the table.

Opting Out and Re-signing with Brooklyn

In most cases, a player can make the most money by opting out and signing a new contract. In general, the cap rises faster than salaries do, making signing a new deal the best path.

For a couple of reasons, James Harden is in a unique spot where this doesn’t apply to him.

First off, Harden has been on a max salary for a while now, including being grandfathered into Designated Veteran Player status several years ago. That means his current maximum salary is nearly $5 million above the regular maximum salary for a 10+ year veteran ($44.3 million to $39.3 million).

Next, because of the pandemic, the cap isn’t going up as rapidly as previously anticipated. Most projections have the cap rising by a minimal amount for at least another year ($112 million to $119 million). That’s kept max salaries down somewhat; to a point where Harden’s maximum salary for 2022-23 remains almost $5 million above the regular 10+ year maximum salary.

If Harden opted out and re-signed with Brooklyn for the max, his new deal would look like this:

But…he won’t. Because opting out and re-signing isn’t the most lucrative path to maximize his earnings.

Opting In and Extending with Brooklyn

Here’s where things get interesting and really, really expensive!

Remember how we said Harden is in a unique situation because of how high his salary currently is? That applies in an extension as well.

In this scenario, Harden would opt in for $47.4 million for 2022-23. He’d then sign a four-year extension with the Nets this offseason, giving him five total seasons under contract. Like the opt out and re-sign option, this results in a contract running through 2026-27, but Harden would start at a higher first-year salary, which would push his deal to even more total money.

Here’s what opting in for 2022-23 and signing a four-year extension would look like:

This option starts to look like one of those massive Major League Baseball contracts where the aging star is getting paid long after he should be an everyday player. Albert Pujols anyone? Essentially, you are paying in the future for past performance.

This is the most lucrative path for Harden to maximize his earnings. That makes it the most likely path forward…unless Harden really wants to change teams to get away from Brooklyn.

Opting In, Traded and Extending with New Team

If Harden really wants to leave the Nets, the exact same contract as opting in and extending with Brooklyn is open to him if he opts in for 2022-23 and is traded. There are a couple of caveats though.

Harden wouldn’t be eligible to sign an extension with a new team for six months after being traded. But because he’d be in the final season of his deal in this scenario, he can sign that four-year extension at any point. Extensions only have to be completed in the offseason is more than one season is remaining on the contract. Expiring deals can be extended at any time.

The second, and more important caveat, is that his option allows Harden to maximize his earnings, while also preventing the acquiring team from becoming hard capped for the 2022-23 season. Because it would a be a straight trade vs a sign-and-trade, the hard cap wouldn’t come into play. That would make building out a contending roster far more viable, if still extremely expensive.

If Harden wants out of Brooklyn, this is the best, and most likely path forward.

There are basically five options for James Harden laid out above, in essentially ascending order of likelihood of happening. The sixth option is that Harden opts in for 2022-23, plays out the season on an expiring deal and becomes a free agent in 2023. But at his age, with a mounting injury history, that’s so unlikely it’s not even worth considering.

The best bet for Harden is to opt in for 2022-23 and either agree to an extension with Brooklyn or to force a trade and sign an extension six months later. That second option maintains the Nets as a title contender this season, without strengthening a rival. And it gives Marks and Morey time to figured out a trade package for this summer. If Brooklyn doesn’t want Ben Simmons, then Philadelphia can find a third team to route Simmons to, while getting value in the deal for the Nets.

Or, if the Nets play well and maybe win a title, Harden can opt in and re-sign and keep competing for championships alongside Kevin Durant and Kyrie Irving in the immediate future. It’ll be one or the two, as the chance to make nearly $275 million over the next five years is simply too alluring to pass up.