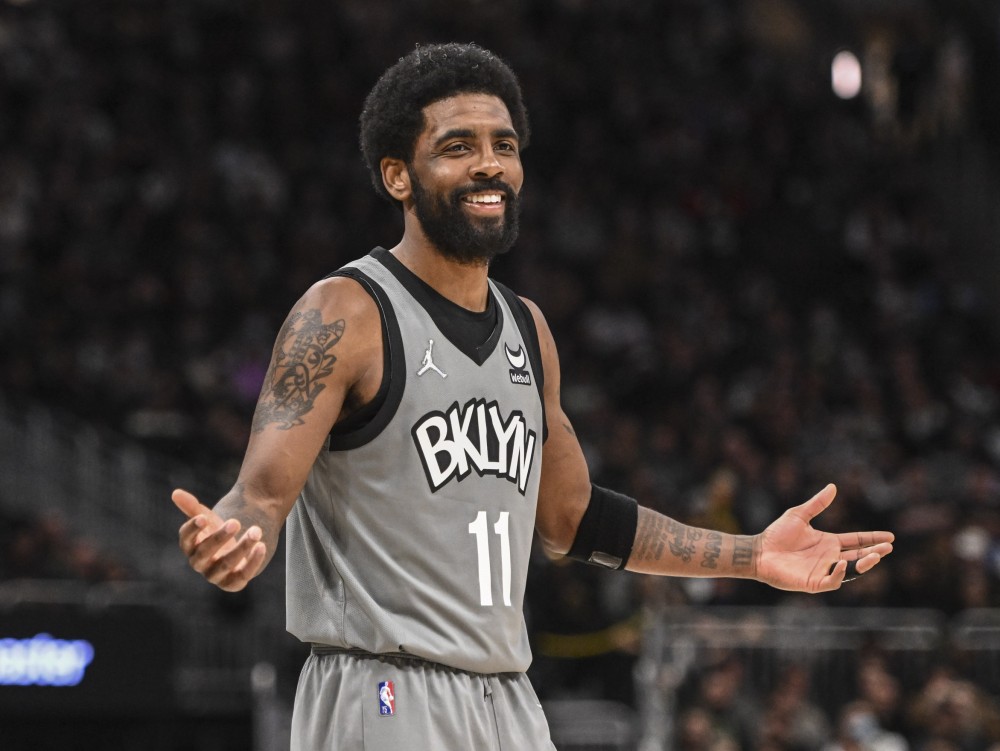 It appears New York City is moving close to lifting the vaccine mandates that have kept Kyrie Irving from playing in home games for the Brooklyn Nets this season. That potentially removes an immediate concern of Irving’s availability for postseason home games for the Nets. But just as big of a concern looms this offseason.

Irving has a $36.9 million player option for the 2022-23 season, as the final year of the four-year deal he signed with Brooklyn in the summer of 2019. The most likely course of action is that Irving will decline that option and become an unrestricted free agent. But whatever you think is most likely to happen and Kyrie Irving don’t always go hand in hand.

With that in mind, here are all the reasonable contract options for Irving this summer.

The most simple and straightforward thing Irving could do is to opt in for the 2022-23 season. That would put him on the Brooklyn books for $36,934,550. He would then be an unrestricted free agent with full Bird rights in the summer of 2023.

This is the least likely path Irving will take for a couple of different reasons. First, Irving has had some serious health issues over the years. He’s had two occurrences of serious knee injuries, and he’s battled other ailments as well. He’s also turning 30 years old at the end of March, which still remains an age barrier that often comes with a drop in production for guards.

Second, Irving would be leaving considerably money on the table by picking up his option. Whether with the Nets, or another team, he can get over $5 million more in just 2022-23 salary alone. Factor in raises and additional years of salary, and it would be a shock to see Irving opt in for next season.

This scenario is plausible, but not overly likely. Simply because Irving would be leaving a year on the table in this type of extension. Now, that may not be of the biggest concern, as Irving may not push for the full five years he could get in a new deal, but he would be limited to four years in an extension.

The latter two scenarios would both cost Irving money in 2022-23, and thus over the life of the extension, so we’re not even going to bother covering them. But the first scenario is still semi-plausible. Here’s what the numbers would look like:

This is a four-year extension with 8% raises. What’s interesting is that Irving would technically sign for 120% of his current $35.3 million salary, but that amount would take him just a hair above his projected max salary of $42,350,000 for 2022-23. In that case, his salary would get amended down to the maximum allowable for next season.

For what it’s worth, this extension would be for the exact same amount Irving could sign for in a four-year deal with Brooklyn. But we’ll come back to that later.

The Full Max with the Nets

If Irving is happy in Brooklyn, and the Nets are happy with Irving, they can go the full five-year max deal for the veteran point guard. In that scenario, Irving would opt out for 2022-23 and sign a new, five-year deal. The first four years would look the same as above, but a fifth year would get tacked on, making the deal look like this:

This is a five-year deal with 8% raises. As Irving now has 10 years of service, this is the absolute maximum he can command in a new contract. The key is that he can only get a fifth season, plus the 8% raises from the Nets.

It seems highly unlikely Irving will leave Brooklyn. He wanted to go there and he recruited Kevin Durant to team up with him on the Nets. The team also seems positioned to be a title contender for at least the next few seasons, assuming Durant and Irving stick around and stay healthy.

But…this is Kyrie Irving we’re talking about. He’s a pretty unpredictable guy. Let’s say he’s not really happy in Brooklyn. Or let’s say some form of the vaccine mandate sticks around or seems likely to come back. In either of those scenarios, maybe Irving looks to head elsewhere.

If that happens, Irving could either sign with a team via cap space or he could move via sign-and-trade. This summer, no teams project to have enough cap space to sign Irving directly. A couple can get within the range necessary, so the idea isn’t entirely off the table. But if Irving is leaving Brooklyn, it would most likely occur via sign-and-trade. The good news is, for our purposes here, the contract would be the exact same either way:

That’s a four-year deal with 5% raises, which is the max Irving can get from another team, either straight signing via cap space or via sign-and-trade. The first-year money is the same, but over the life of the deal Irving would sacrifice considerable money. He’d forfeit over $7.6 million from the extension or four-year max scenario. And Irving would give up over $63.5 million compared to signing the five-year max with the Nets.

Kyrie Irving is different from most basketball players. He does his own thing, almost without concern for public opinion. He famously (or infamously in New England) told the crowd at TD Garden that he’d be re-signing with the Boston Celtics if they’d have him. Eight months or so later, Irving signed with Brooklyn.

This season, despite pressure from all corners of the NBA world, including from some folks with the Nets, Irving held firm in his beliefs and did not get vaccinated. It’s cost him considerable money, as well missing approximately two-thirds of Brooklyn’s games.

But Kyrie Irving isn’t crazy. He certainly does his own thing, and he’s never been one who is solely financially driven. If so, he wouldn’t have left Boston for Brooklyn while leaving considerable money on the table. And he certainly wouldn’t have sat out most of this season if he made all his decisions based on finances.

But Irving still has taken a pretty big financial hit this year. Combine that with his ostensible happiness to play with Kevin Durant in Brooklyn, and it’s unlikely he’s going anywhere. The most likely path is that Irving signs either a straight four-year deal, or a five-year deal with a player option on the final season, for the maximum. That will allow him to align his tenure with the Nets with Durant, as both could hit free agency again in the summer of 2026. At that point, Irving will be 34 years old, while Durant will be turning 38 prior to the 2026-27 season.

NBA players are playing longer and longer, and at higher levels, than ever before. It’s not a lock that Irving and/or Durant would be retiring before another contract 2026. But it is likely that Irving’s next contract will align with Durant’s to at least set them up to make that decision together.