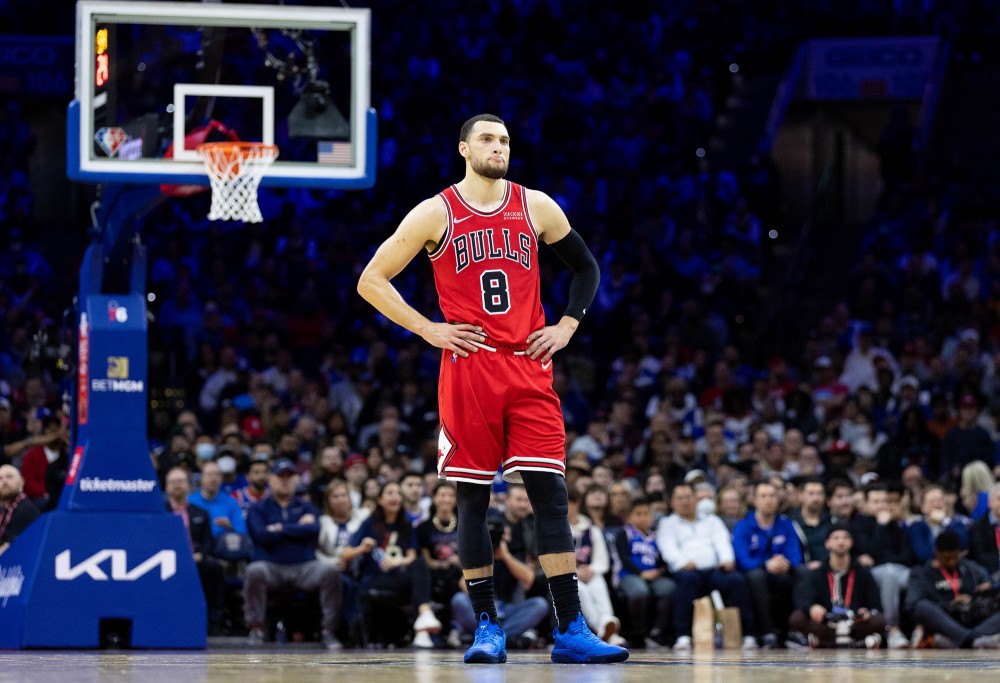 In the summer of 2018, Zach LaVine signed a four-year, $78 million offer sheet with the Sacramento Kings. The offer sheet was structured with no options and was worth a flat $19.5 million per season. It seems silly now, but there was real debate at the time as to whether the Chicago Bulls should match. Chicago did match. And they made the right decision as LaVine’s career has taken off since then. Why then were there questions about if Chicago could match? LaVine had played for only poor teams in his career, having spent the first three seasons of his career with the Minnesota Timberwolves and the fourth year with the Bulls. In addition, LaVine had some injuries issues in his third and fourth seasons.

Still, he was seen as a talented player. One who could both handle the ball as a playmaker, but also function as a primary scorer, even if that was still somewhat theoretical at the time. In the first four years of his career, LaVine averaged 14 points, three rebounds and 3.2 assists per game. His first year in Chicago, after being acquired in the trade that sent Jimmy Butler to the Wolves, featured just 24 games. LaVine debuted in mid-January after tearing his ACL in his last with year the Wolves. He was up-and-down until he was shut down for the year in mid-March. In the four years since the Bulls matched the offer sheet from the Kings, LaVine’s career went to the next level. He’s averaged 25.3 points, 4.8 rebounds and 4.5 assists per game. In addition, LaVine has had 48/39/83 shooting splits during that period.

Just as importantly, LaVine has stayed mostly healthy during this run. That has helped him garner back-to-back All-Star nods. In addition, LaVine has shown he’s not just a “good stats, bad team” guy, as he’s been a big part of Chicago’s turnaround. This summer, LaVine will again hit free agency. The difference is this time he’ll be an unrestricted free agent. And the Bulls won’t get him on any sort of under-market, team-friendly deal. LaVine is likely to get paid.

Here are the options for Zach LaVine’s next contract.

We can rule this one out, but for the sake of completionism, we’re going to cover it.

LaVine and Chicago could ink a veteran extension right now. The challenge is that it won’t pay LaVine nearly enough. He’d be limited to 120% of his current salary in the first year of an extension that would start in 2022-23. LaVine could then get 8% raises on the three subsequent seasons. That deal would look like this:

It should be pretty easy to see why this one isn’t happening. That’s not even the maximum a player can get coming off a Rookie Scale contract. More simply put: players hitting free agency after an All-Star season command far more than an average of $26 million per season.

The Standard Max with the Bulls

Now, we’re talking! This is probably where the conversation starts for LaVine and Chicago. He just recently turned 27 years old, so LaVine should maintain his value throughout the life of this deal. Here’s what the full max would look like:

It’s likely this deal would include a player option for LaVine on the final season. Most players of his caliber have been able to get a player option on a max deal. That would allow LaVine to get back on the free agent market for one more big contract when he’s 31 years old.

Let’s say the Bulls playoff run doesn’t go as hoped for and Chicago is bounced in the first round. Maybe LaVine doesn’t mesh with DeMar DeRozan and Nikola Vucevic on the biggest stage. Maybe he wants a bigger role on his own team elsewhere.

Even if the Bulls falter earlier than some might expect in the postseason, LaVine will have been a huge part of that turnaround. He’s probably not leaving Chicago in that case. But, just in case, here’s what a max deal with another team would look like:

That’s the full four-year max LaVine could sign for with another team. It starts at the same 30% of the salary cap max that he can get from the Bulls, but it includes just 5% raises.

Again, given LaVine’s stature as a two-time All-Star, it’s likely he could demand a player option on the fourth season. That would put him back on the market as a 30-year-old.

One last note on this one: This is the same deal LaVine could get via a sign-and-trade this summer.

The Designated Veteran Max with the Bulls

This deal is unlikely to be available to LaVine, but isn’t completely out of the running. LaVine won’t win MVP or Defensive Player of the Year to qualify for a Designated Veteran contract. But he could still make a late push to make an All-NBA team. If that happened, LaVine would qualify to jump from the 30% of the cap max tier to the 35% of the cap max tier, despite having only eight years of service.

A couple of things to note: LaVine is only eligible for this deal this offseason. And he’s only eligible to get it from the Bulls because Chicago acquired him while he was still on his Rookie Scale deal.

That’s the full Designated Veteran max starting at 35% of the cap, with 8% raises. As with the other options presented here, LaVine would likely demand a player option on that final season. And he would be in an even better spot to demand one coming off an All-NBA nod.

It seems unlikely that Zach LaVine will make an All-NBA team this season. He’s had a good year, but the Bulls slide in the standings, combined with LaVine missing 13 games as of this writing, probably takes that off the table.

It’s also fair to eliminated the standard veteran extension. He’s not taking that small of a contract.

The guess here is that LaVine take the full five-year max with the Bulls. There are a few reasons for this line of thinking.

First, LaVine has had some health issues, including a reoccurrence of knee pain this season. Most players in that situation want to lock up as much guaranteed money as possible.

Second, LaVine has almost all the leverage here. The Bulls can’t possibly replace him if he leaves. Even if it was a sign-and-trade, it’s unlikely Chicago gets back a player as good as LaVine.

Third, the Bulls are set up to win now. DeMar DeRozan and Nikola Vucevic are win-now players. Chicago has to keep LaVine to keep things moving onward and upward.

Lastly, even if LaVine falters some health-wise, his play should remain solid enough that he’ll retain trade value throughout the life of a five-year max deal. That alone should be enough protection for Chicago.

Even with factoring in a $36.6 million deal for LaVine in 2022-23, the Bulls should still be about $11 million clear of the luxury tax with four roster spots to fill. That should give them the ability to use their full Non-Taxpayer Mid-Level Exception to attract a solid free agent and still dodge the tax. It’ll take a salary-clearing trade or two, but that’s no big deal. Given the lack of spending power around the NBA this summer, the MLE will be worth more than usual in free agency, as cap space dries up before good players have all found homes.

LaVine’s going to get his max deal. And he’s likely going to get it from the Bulls. There’s nothing team-friendly coming this time around, but Chicago should still be in a good spot to build a contender around LaVine, DeRozan, Vucevic and Lonzo Ball for the next few seasons