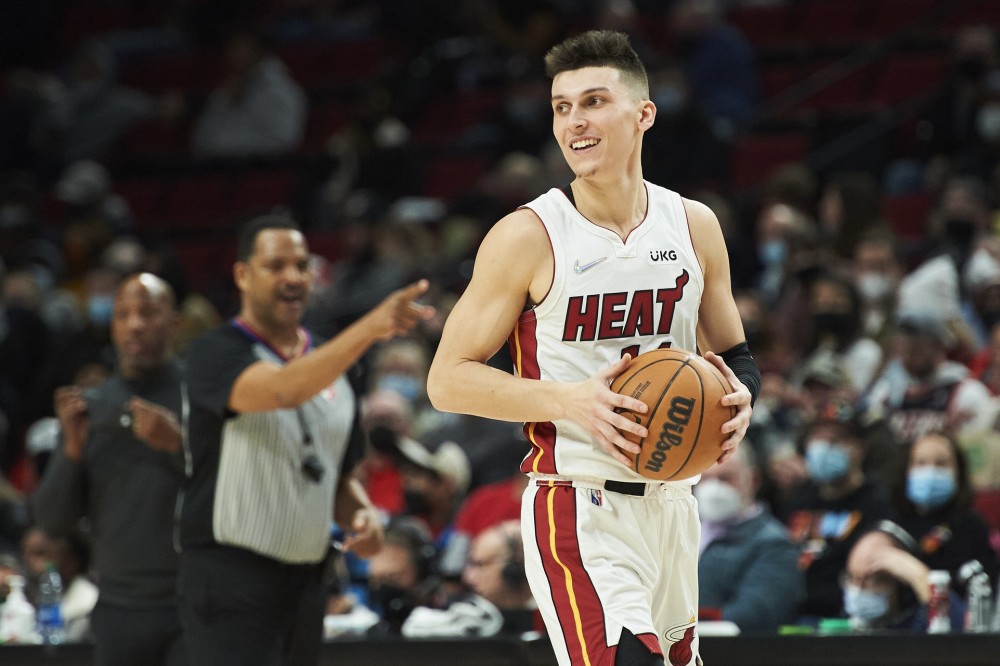 Tyler Herro of the Miami Heat is probably going to win Sixth Man of the Year. Actually, remove the probably. Herro will win Sixth Man of the Year. Herro has been dominant off the bench for Miami this season. He’s averaged 21 points, 4.8 rebounds and 3.8 assists per game for the Heat in his third season. In a somewhat odd twist, Herro has been far more effective as a reserve than as a starter. His efficiency drops considerably as a starter, which leads to fall-off in overall production. That begs the question: How much do you pay a sixth man?

That’s what the Heat have to answer this summer, as Herro becomes extension eligible. Reports are already out there that Herro is seeking a max extension. Can you max out a player who has started in just 33 of 166 games? As a reminder: Herro is under contract for 2022-23 at $5.7 million. If he signs an extension this summer, it would start with the 2023-24 season. We’re using a conservative salary cap projection of $127 million to build our estimates off of.

Let’s cover this first, because it’s what Herro is going to ask for. For a guy who is a proven scorer, good shooter and developing playmaker, it’s fair to start here.

Here’s what the full max extension would look like for Herro:

This is a five-year extension with 8% raises. It starts at the full projected max of $31,750,000. Player options on the final season have become somewhat common again, after disappearing for years. But they are generally reserved for players who have All-Star or All-NBA selections on their resume. Herro probably isn’t in a spot to command a player option yet.

One other option that’s worth considering, but hard to put figures to, is the idea of a below max extension, but with bonuses that could bring it to a max. This is essentially what the Boston Celtics did in Jaylen Brown’s extension. Brown’s guaranteed money is below the max, but he has performance and team success language that can push his salary up close to max money. That could be a way for Miami and Herro to split the difference, if the Heat aren’t comfortable with a guaranteed max.

Let’s say Miami doesn’t want to go to the full max and Herro won’t budge off that ask. They could play things out during the 2022-23 season. In that case, Herro would be eligible for restricted free agency in the summer of 2023.

Nothing would change as far as the deal Miami could offer Herro, as far as the max goes. That number remains the same. What could happen is a down season could knock Herro’s price tag down some. Conversely, if Herro continues to play as he has this season, he’ll be in an even stronger position to demand a max deal.

We’re going to cover this here, because it’s as good a place as any: Herro isn’t a candidate to sign the Qualifying Offer and hit unrestricted free agency in 2024. Herro will likely meet Starter Criteria (via the 2,000 minutes played criterion vs the 41 games started criterion), which will bump his QO just slightly. Instead of $7.9 million, Herro could sign the QO for $8.5 million.

Simply put: Herro is too good to sign for so little. In addition, there are no signs Herro has any sort of adverse relationship with Miami that would cause him to want to leave town so badly that he’d sign the QO.

Leaving For Another Team

Let’s say things do go sideways for some reason between Herro and the Heat. He could sign with another team as a restricted free agent. That offer sheet would look like this:

This is a four-year max deal with 5% raises. Generally, an offer sheet includes all the bells and whistles to entice the incumbent to let the player walk. This deal would likely include a 15% trade bonus, a player option on the fourth season and probably some up front actual payments. The idea is to make it so that it’s as uncomfortable as possible for the incumbent team to match.

Given that Miami’s front office is one of the smarter and more creative in the league, it’s unlikely things would get to this point. If Herro was set on leaving South Beach, the Heat would look to work a sign-and-trade. In that case, the contract for Herro would look exactly the same as above, as players can’t get more via sign-and-trade that via signing outright with a new team.

The Extension After a Trade

We’ll cover this one pretty quickly, as it would look exactly like the max extension with Miami would. Trading Herro this offseason seems unlikely, but there is a precedent to look at.

In 2012, after three outstanding seasons off the bench, the Oklahoma City Thunder traded James Harden to the Houston Rockets.

No, we’re not saying Tyler Herro is going to become James Harden. But…we’re not exactly not saying it either. Go compare their first three seasons. We’ll wait… Kind of similar, right?

At any rate, if Miami wanted to cash in, rebuild their young talent and draft pick pipeline, they could look to deal Herro to a team that sees him as their Harden. In that case for Herro, the extension options would look the same as they would with the Heat. And if a team gave up a big package to get Herro, they’d be giving him a max deal.

It’s unlikely Tyler Herro is going anywhere. He’s simply too important to what Miami has built, and just as key, to what the Heat are building moving forward.

Expect Herro and Miami to come to an agreement on a max deal. Whether that’s four or five years, or five years with a player option on the final season, is up in the air. Or it could be a slightly below max, with bonus language to the max.

Given his status as the top sixth man in the league, age, continued improvement and importance to the Heat, Herro will probably get maxed out.

And that’s when things get really interesting for Miami.

If Herro gets a max that starts with the 2023-24 season, the Heat will have the following players under contract for that season:

For five players! That’s a minimum of nine roster spots to fill. Re-sign a couple of their own free agents and the Heat start pushing into Nets, Warriors, Clippers and Lakers levels of tax bills.

At the trade deadline, Miami not-so-subtly shopped Duncan Robinson. Part of that is Robinson is in the midst of a third straight season of declining production. And that’s attached to $74.4 million owed to the sharpshooter through 2025-26.

But a just-as-big a part of shopping Robinson is related to future roster planning. You can’t be over the tax line for just five players. Especially when two of the five players will be 34 years old (Butler) and 36 years old (Lowry), with lengthy injury histories. Look at this season’s Lakers for how precarious building that top-heavy of a roster becomes.

Miami is smart. They also know they have a full season and two offseasons to figure things out. They’ll likely lock Herro up to an extension, and probably one that approaches the max. But the Heat will make roster tweaks before Herro’s extension kicks in. It’ll probably cost them Robinson, but that’s the price of doing business when you’ve nailed your draft picks and end-of-roster signings like Miami has.