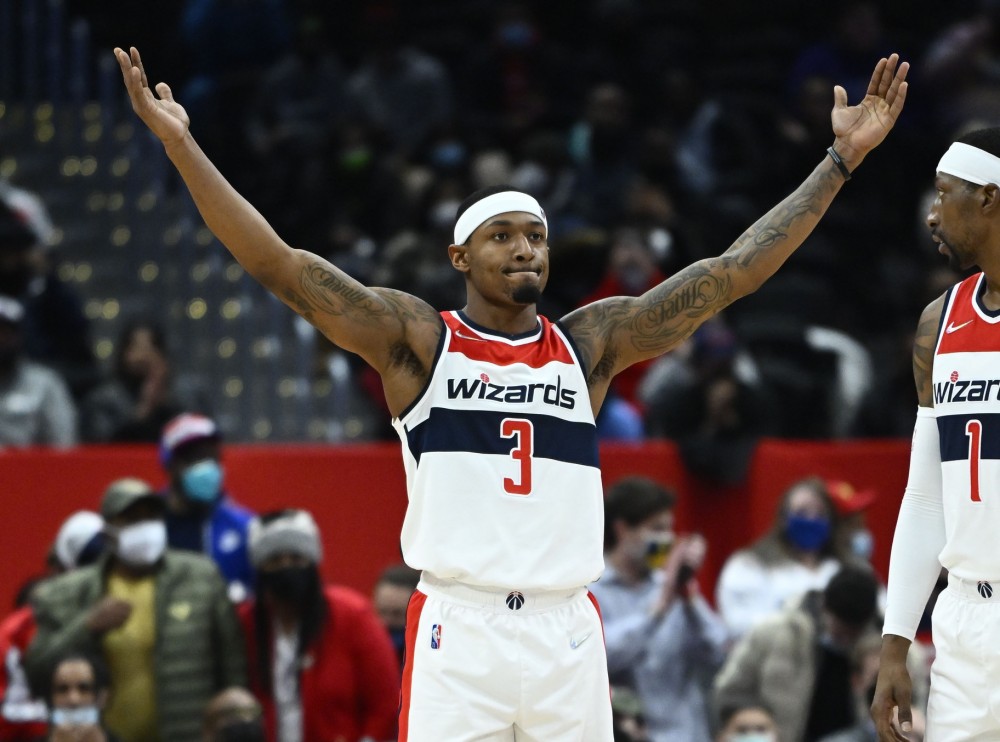 The 2021-22 season was Bradley Beal’s 10th year in the NBA. That’s a milestone in terms of longevity and in terms of contract tiers. For Beal, he’s now eligible for the largest maximum deal possible. But it’s also an important marker for a player whose health concerns were once so real, it was fair to question if he’d make it this far.

In his first four seasons, Beal missed 81 out of a possible 328 games. That’s one full season’s worth of time. Then Beal turned a corner with his health and was mostly available for the next five seasons. Then this year, the wheels came off and Beal will have missed more than half of the season. The good news is that the early injuries for the Washington Wizards scoring guard were filled with lower body injuries. His injury this year was to his left wrist and Beal is expected to make a full recovery. That recovery will come just in time for free agency.

Now, if we take Beal at his word, that free agency should be relatively drama free. The biggest question is probably the length of his next deal. Beal has repeatedly said he has no desire to leave Washington. That’s a sentiment shared by his family on social media. And it’s one the Wizards front office cites on a semi-regular basis. Yet, as it has for years, speculation of Beal skipping town from the capital continues to hover. Recent reports are that the Miami Heat could make a run at Beal in free agency, despite that being a tricky proposition.

At any rate, one thing is certain: Bradley Beal will be a free agent this summer. With that in mind, here are the various contract options for the Wizards franchise player this summer.

There are two different ways Bradley Beal could forgo free agency and do an extension with the Washington Wizards, but neither are going to happen. Beal could decline his player option and sign a four-year extension that starts with the 2022-23 season right now. That deal would look like this:

That’s the 120% max bump Beal can get via a first-year extension, followed by 8% raises after.

Or Beal could exercise that player option for 2022-23 and then add four years on from there. That deal would look like this:

That’s the 120% max bump off the picked-up player option, followed by 8% raises after.

In both of the above scenarios, Beal would be sacrificing a good chunk of first-year salary. Beal’s projected max salary for 2022-23 in Year One of a new contract is $42,350,000. That $2 million-to-$6 million is a big difference immediately and even more so over the life of a long-term deal with 8% raises.

Re-signing with the Wizards

If Bradley Beal wants to maximize his next deal, he’ll re-sign with Washington. Because he entered the NBA as a 19-year-old, Beal is only turning 29 at the end of this league year. He’ll start Year One of his fourth NBA contract still in his prime.

That removes the often-tricky barriers of the Over-38 rule that many 10-plus years of service players face in the latter years of long-term deals. Beal will be only 33 years old in the fifth year of a full max deal that would look like this:

It’s pretty easy to see why Beal won’t be signing an extension. Instead, he’ll opt for a new deal that will pay him upwards of $64.5 million over the life of the deal than he could get by extending. It’s also likely that Beal will be able to get a player option on his final season. That will make him a free agent again for his age-33 season. If he can stay healthy, he could be in line for one more good-sized payday.

Signing with Another Team

Let’s be clear here: If Bradley Beal changes teams, it’s going to be for the max. It’s also highly likely to happen via sign-and-trade, as none of the teams with cap space this summer are in a spot where adding Beal makes sense. Nor does it make sense for Beal to sign on with a rebuilding team at this point in his career.

Whether Beal changed team via sign-and-trade or via outright signing, his deal would look the same:

As you can see, that’s a pretty hefty difference in total salary. In total money, it’s about $63.5 million. If we just did a four-year total vs four-year total comparison (assuming Beal gets a player option on Year Five), it’s a $7.6 million total difference. But a player with Beal’s health history isn’t likely to give up on a fifth-year of potential salary.

It’s also fair to assume that if Beal is changing teams, he’ll be able to demand a player option for Year Four. No acquiring team is going to let that stand between them getting Beal or not. And that would put him back on the market as a 32-year-old that could possibly still command another full max deal of four or five years.

Bradley Beal could make waves this summer and kick off somewhat of a chain reaction of change around the NBA. Or he could do what he’s said he’s going to do, and what he’s always done in the past, and stay right home in Washington. If Beal was to change teams, say to long-rumored suitors the Miami Heat, it would have to be via sign-and-trade. That would sap Miami of a lot of their depth. And they’d have an impressive, but older, starting five that’s filled with at least somewhat injury-prone players. If Beal stays with the Wizards, he’ll need a significant commitment from ownership and the front office that they are going to build a winner around him. He said as much in early-March when he commented that the Wizards “know what this summer is”. That begs the question: Is Beal really a guy you feel comfortable with committing five years and over $245 million to?

On one hand, since finding good health in 2016-17, Beal has blossomed. He’s averaged at least 22.6 points per game in each of the last six seasons, and he’s topped out at over 30 points per game twice. Beal’s also been an All-Star in three of the last five seasons. On the other hand, Beal did suffer a relapse in health this season. And this year marked a fourth straight season where his once-deadeye shooting has fallen off. After dropping to around 35% from behind the arc for four years, Beal fell off to just 30% this season. Even more worrisome, his volume of three-point attempts dropped off to 5.3 attempts per game. Most worrisome of all, Beal’s free throw attempts per game have dropped from 8.0 to 7.7 to 5.1 over the last three seasons. That’s often a sign that a player can’t beat the defense and force them to foul the way he once could.

Yet, what choice do the Wizards really have? Beal is still in his prime, still incredibly productive and he’s always wanted to stay home. That’s worth a lot to franchises in an era where guys change teams as often as the cherry blossoms come into bloom. Expect Beal to decline his player option and to sign a five-year max deal with Washington this summer. He’ll probably get a player option on the final season too. Then, if the Wizards are still floundering near the bottom of the Play-In race in a year or two, Beal can ask for a trade to a contender. At that point, no Washington fan can blame him. Beal will have given the Wizards over a decade to figure it out. That’s more than double the patience most stars give a franchise.

NBA Non-Taxpayers Who Should Add Salary At The Trade Deadline