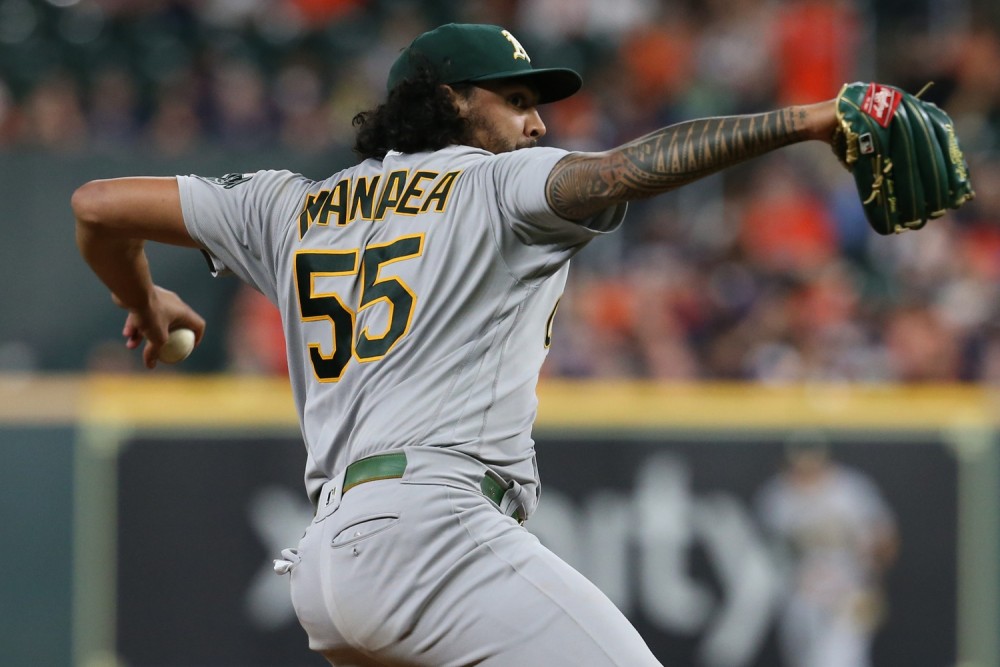 Every few years the Oakland Athletics (among other teams) sell off a few notable pieces to lower their cash allocations, and reset their prospect pool. 2022 has officially become one of those years. In the past few weeks the Athletics have shipped out starting pitchers Chris Bassitt & Sean Manaea, first baseman Matt Olson, & third baseman Matt Chapman to the Mets, Padres, Braves, & Blue Jays respectively.

In doing so, Oakland has sent away over $40M of projected cash salary, bringing back 12 young players all in pre-arbitration contract statuses. It’s a significant cash dump, and a significant prospect build up, as the following details.

Matt Chapman (28, 3B)
Chapman was in the A’s long-term plans just 2 seasons ago, as Ken Rosenthal reported that Oakland made a 10 year, $150M offer to their 3rd baseman following the 2019 campaign. He turned the deal down, suffered a serious hip injury the following season, and now finds himself on a great Toronto team, having scored a 2 year, $25M extension to buy out the rest of his team control. Chapman has 25 HR/75 RBI potential every year, but the batting average has dropped immensely over the past few seasons, putting him into a boom or bust situation at the plate. Chapman was slotted for around $10M this year in terms of arbitration salary, but his extension pays him $13M this year, and another $12M in 2023.

Kevin Smith (25, 3B/OF)
ETA: Starting 3B, 2022
A fourth round pick back in 2017 by Toronto, the 25 year old saw action in 18 games last season as a late September callup. He figures to slot in as the starting third baseman for Oakland immediately, taking the spot Matt Chapman has held down since 2017. With just a quarter year of service under his belt, his minimum salary fits the price mold of the 2022 Athletics.

Kirby Snead (27, P)
ETA: Bullpen, 2022
With just 7 MLB appearances under his belt, and no significant prospect ratings to speak of, Snead becomes the biggest wild card in this package. He’s a bullpen arm for life, but with quality pitches in his arsenal, there’s a very good chance that he makes the A’s out of the gate, and sticks for the majority of 2022. Snead should carry a near minimum salary, and holds 2 minor league options as well.

Gunnar Hoglund (22, P)
ETA: Starting Rotation, 2024
The #19 overall selection in 2021 by the Blue Jays is now 10 months into his Tommy John surgery recovery, but was still Toronto’s top pitching prospect at the time of this move. He’ll now complete his rehab and begin his way onto the mound with an A’s organization that has built up legitimate MLB arms for the better part of two decades now.

Hoglund immediately slots in as the A’s #7 prospect according to MLB Pipeline, with above average control to boast. Financially, his team control has yet to begin, and he projects to hit the show around 2024.

Zach Logue (25, P)
ETA: Bullpen, 2022
The career minor leaguer was a 9th round pick by Toronto back in 2017, but had risen to the Blue Jays’ 27th best prospect last season, showing much better control and a spike in strikeouts. He joins Oakland as their #22 prospect, and could make the squad out of the gate this year based on the fire sale, and a few injuries.

Matt Olson (1B, 28)
He’ll forever be linked to Freddie Freeman per this move, and filling those shoes will be a mammoth ask for anyone - but Olson’s power numbers (both traditional and advanced) tower over Freeman’s in the past few seasons. The 2021 All-Star starter grew up near Atlanta, who almost immediately turned around and extended him to a, 8 year, $168M contract extension, buying out his final two arbitration years and then some. He’s now contract-controlled through age 36 - the exact age Atlanta was hoping to keep Freddie Freeman’s next contract limited to. Freddie got the age 37 year offer from LA, and bolted.

Christian Pache (23, CF)
ETA: Starting CF, 2022
Pache’s entrance into Oakland fills another immediate hold, as he slots into the starting CF role vacated by Ramon Laureano’s PED suspension (27 games still left to be served). Defensively he’s about as good as it comes in the oufield, and while his offense hasn’t found much life yet (including at bats throughout the NLCS in Atlanta last fall), his ceiling there is more than adequate to stick at the MLB level.

Shea Langeliers (24, C)
ETA: Depth C, Late 2022
The #54 prospect in America at the time of the deal, Langeliers slots in as the #2 prospect for Oakland immediately (behind Tyler Soderstrom, another catcher). He possesses an A+ arm, B+ plate management, and average offensive ability right now. He’ll begin the year off the 40-man roster in AAA, but could find his way on this team later in the summer if his bat heats up there. Long-term, current starting catcher Sean Murphy has 3 full years of arbitration ahead of him (2023-2025), but could price himself out of Oakland in 2024, paving the way for Langeliers.

Joey Estes (20, P)
ETA: 2024+
The young arm was Atlanta’s #14 prospect at the time of the move, drafted in the 16th round out of high school back in 2019. He’s a fringe starter right now based on early development, but at just 20 years old, and already with A+ swing and miss heat, there’s a real chance he becomes a name to watch in the next 18 months. He’ll start 2022 at the High-A minors level.

Ryan Cusick (22, P)
The #24 overall pick in 2021 brings a big-time heater, and strong spin rate measurables to the A’s, where he slots in as the #9 prospect currently. As with many players his age, it’s about learning how to control the offspeed stuff with regularity, but there’s a real sense that he’s in this rotation come 2024.

Chris Bassitt (33, P)
At the time of this move, Bassitt was being added as an outstanding #3 option out of the Mets’ starting rotation. A Jacob deGrom shoulder flare up and Max Scherzer hamstring tweak later, and this acquisition becomes a front and center necessity for New York. Bassitt’s career got off to a slow start, but following 2018 Tommy John surgery, he’s been one of the more efficient arms in the league (29-14, 3.23 ERA, nearly 400Ks in 412 innings). Unlike the majority of arms in the league, Bassitt isn’t an overpowering pitcher, built more for control, and throwing to contact. The 33-year old filed for a $9M arbitration salary this season, his final year of team control before free agency.

Adam Oller (27, P)
ETA: Starting Rotation, 2022
A 20th round selection for Pittsburgh back in 2016, he was Rule 5 drafted by the Mets last winter and started to draw plenty of attention immediately thereafter. From a grading standpoint, none of his three pitches (fastball, slider, change) rate above the 50 mark right now, but his grinder mentality could make him an innings eater at the backend of a rotation for a few years. Injuries to the A’s current rotation should allow Oller to make this squad out of camp.

Sean Manaea (30, P)
The 30-year old made 32 starts last season in Oakland, by far a career high. He posted a strong .391 ERA, with 194 strikeouts, and just 41 walks in 179 innings. Manaea will slot in as the #3 arm on a loaded Padres staff, joining Yu Darvish, Joe Musgrove, Blake Snell, & eventually Mike Clevinger for the upcoming season. Manaea’s final  year of team control comes with a $9.75M, putting him in line for free agency after 2022.

Euribel Angeles (19, SS)
The #8 prospect from San Diego joins Oakland as a bit of a patchwork utility infielder defensively, but a player with a real idea of what he’s doing at the plate despite being just 20 years old. He’ll start 2022 in High-A ball, but could progress quickly if the hitting production comes in where it’s anticipated to.

Adrian Martinez (25, P)
The Padres #18 prospect joins Oakland after a slow grind up the minor league system. He pushed his way up to the AAA level last year, but is primarily a two-pitch arm right now. It’s tough to put a definite timeline on his future in the system.