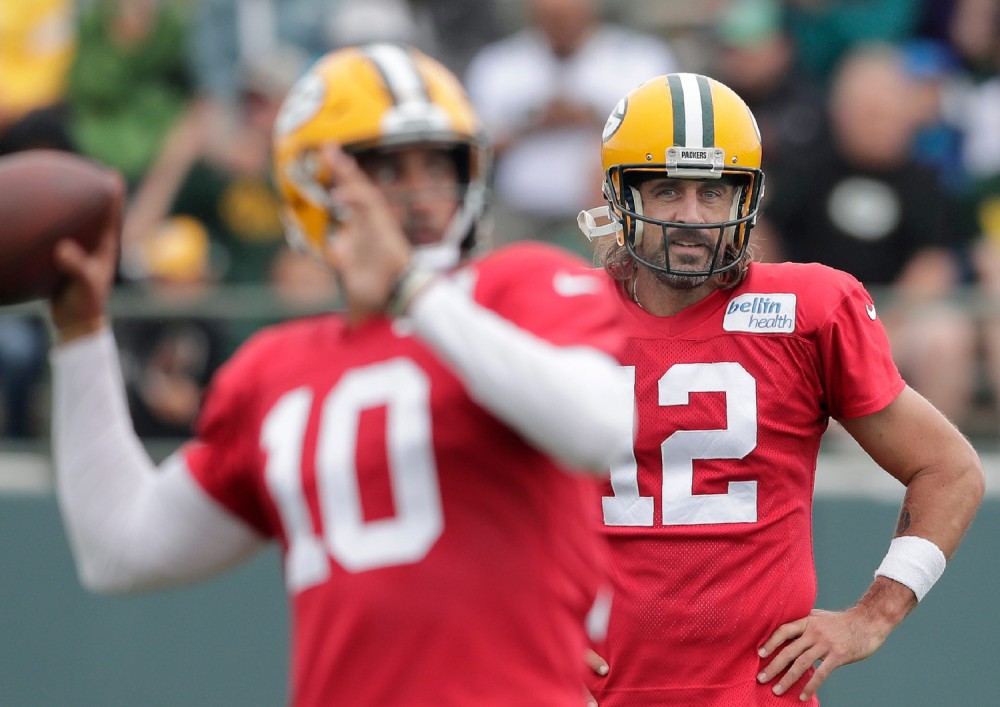 The 4-8 Green Bay Packers are entering the phase of the season where it’s less about this year - and much more about the future. That may be the case even at the quarterback position as a rib injury (packaged with a previous thumb ailment) could force Aaron Rodgers to the bench, and Jordan Love into full-time action: and this actually might be a blessing in disguise for the franchise.

We’ll dive into the financial futures of the Green Bay quarterbacks, starting with Jordan Love’s remaining contract, and 4 options for Aaron Rodgers in 2023 & beyond.

Jordan Love’s rookie contract contains a fully guaranteed $2.3M in 2023, then a projected $22M 5th-year option for the 2024 season. The Packers will need to decide on that option this coming May. If it’s exercised, it immediately becomes fully guaranteed. If it’s declined, Love will be eligible for unrestricted free agency after the 2023 season.

As we move along in this exercise, it’s important to note that if trading Love is the plan, that move will likely need to be completed before the May option deadline passes, affording the new team the opportunity to decide on that for themselves (re: Darnold & the Panthers).

With the Packers now out of playoff contention, giving Love the keys to this team for 6 weeks seems the right organizational move. Understanding the next piece to Jordan Love’s puzzle seems the most important factor to the remainder of 2022. Is he a viable option to become Green Bay’s next QB1? Does he possess enough to captivate at least one team via trade? Or is he a highly drafted backup NFL QB, and nothing more?

By far the least likely outcome next offseason, despite a clear and obvious decline in play (mostly stemming from a broken thumb, but at least a portion belonging to Father Time).

Despite a few injuries, and a miserable record, this still seems the 2nd least likely option for Rodgers in 2023. Though none of us should attempt to predict an Aaron Rodgers next move, as he’s shown us numerous times.

If it were to happen though, the Packers would be staring down a $40.3M total dead cap hit, stemming from signing bonus proration. Rodgers would forfeit the guaranteed $1.165M base salary & $58.3M option bonus due to him next season, as well as the $49.3M available in 2024.

If it ends up being same as it ever was in Green Bay, lots of numbers need to get involved. Financially speaking, this is a tale of two stories: 2023 & 2024

2023
In 2023, the first decision comes with the fully guaranteed $58.3M option bonus. The Packers have between March 17th and the start of the 2023 regular season to decide on that bonus. It’s not a decision of if he’ll earn it - rather how he’ll earn it. If the Packers exercise the option bonus, it will allow the $58.3M to spread out over the remaining 4 years on the contract for salary cap purposes (or $14.575M per season). If they decline the option bonus, it immediately converts to fully guaranteed base salary, meaning Rodgers would now possess a $59.465M base salary, and a $72.4M cap hit for 2023. Guess which path they’re going to take?

Rodgers currently counts $31.6M against the Packers’ 2023 cap, a very tenable number in the grand scheme of things. If the league cap rises to $220M next season, this number represents a workable 14.3% of it. Any type of restructure to this figure makes the 2024 scenario a little uglier.

2024
In 2024, all of the decisions have to happen immediately, as his $2.25M base salary & a $47M option bonus become fully guaranteed 5 days after the 2023 season’s Super Bowl (February 16, 2024). Rodgers would still be tradeable into the league year (as long as the option bonus isn’t yet exercised), but he would no longer be “reasonably releasable”. Before that February 16th date hits, the contract carries $24.48M of dead cap in 2024, representing $16.2M of cap savings.

Long story short, if Rodgers decides to return in 2023, and the Packers want to keep him in the fold as well, this contract becomes a 1 year, $59.5M deal, with an opportunity to bail out completely in February 2024, as shown below.

First of all it needs to be noted: Aaron Rodgers' contract does not contain a no trade clause. So this is very much the Green Bay Packers' decision to be made. With that said, there’s going to be plenty of speculation with this again (ourselves included), despite the large contract attached to him this time around. It’ll get louder if Jordan Love is given an opportunity to finish out the 2022 season, and does so with any type of success.

Financially speaking this is a tale of two discussion points: The Option Bonus, & Timing

OPTION BONUS
As mentioned above, the Packers have between March 17th & the start of the 2023 regular season to exercise that $58.3M option bonus. Trading him before that happens is an obvious necessity.

The dead cap represented in this traded contract includes just the guarantee for the 2023 base salary & the 2023 option bonus. Additional dead cap would incur once the 2024 salary & option bonus guarantee in February 2024 (see Option #2 for full details).

However, any team bringing on Rodgers next offseason would likely be doing so on a 2 year basis based on the initial $43.725M dead cap number in 2024.

TIMING & DEAD CAP
When would this trade happen? This is where things get interesting. The logical initial response to this answer would be Post June 1st, 2023 - allowing the $40.3M of dead cap for the Packers to split up into $15.8M for 2023, & $24.4M for 2024. But waiting until June to process this trade means 2023 draft picks can’t be included in the move. Should a team like the Raiders be interested in acquiring Rodgers, their likely Top 10 1st round pick in 2023 would be of high interest to the Packers.

As long as the trade compensation is worth it, Green Bay likely takes on the full $40.3M dead cap hit for 2023 in order to move him prior to next year’s draft. It would be the second highest single season dead cap hit in NFL history, just below Matt Ryan's current $40.5M hit with the Falcons this season.

Clearly we’re speculating here, but the NFL has seen a major QB move in each of the last 3 offseasons, so as a spoiled member of the hot stove world, it’s fun to think another one is forthcoming.

Will Russell Wilson’s disaster of a season place caution on a bigtime Rodgers acquisition? Yes and No. Yes because it’s human nature to connect the two situations. No because Russell Wilson’s game wasn’t successful leading up to the trade - despite (ironically) reports that a thumb injury had been hampering his ability to produce.

Rodgers has shown more than a few flashes of his greatness in 2022, and it’s fair to assume that should he be able to stay healthy - more of those will continue in the next year or two.

Potential Destinations? The Raiders’ brutal season has them as immediate front-runners. Tom Brady’s future in Tampa Bay could make the Bucs a contender for Rodgers. The Steelers were interested a year ago, and could include Kenny Pickett in a deal to Green Bay this time around. And the Saints, who don’t possess a 2023 1st round pick, should very much be in the mix for Rodgers’ services. And finally, both New York teams (Giants/Jets) have improved rosters that could be an above average QB away from taking that next step.