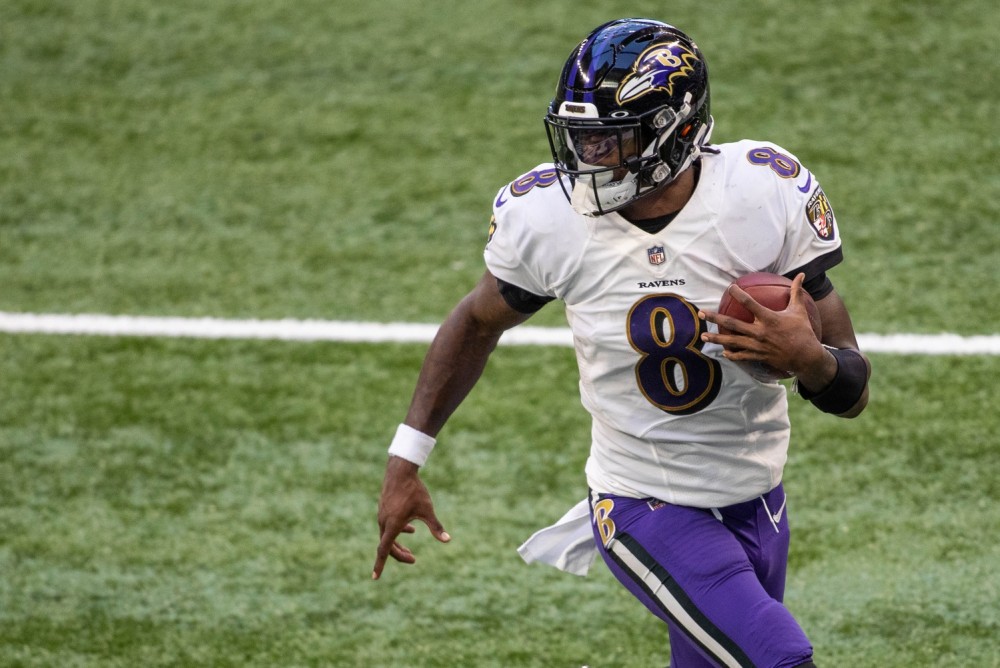 Market Valuation: $43.7M
In his own unique way, Lamar Jackson has put together back to back seasons that calculate to a gigantic payday. But does the eyetest match the stats? He’s averaging almost 75 rushing yards, but under 200 passing yards per game over the past two seasons. He has 76 TDs across 2019/2020 both with his arm and legs, just 4 behind Patrick Mahomes. A playoff win or two could make this payday a reality.

Market Valuation: $40.5M
Allen needed a big third year to supplant himself as the Bills’ franchise QB. He’s done that and then some, finishing the 2020 regular season as a legitimate MVP candidate. He now projects to the second highest contract in NFL history. Allen has a $3.5M salary in 2021, then a 5th year option in 2022 available on his rookie contract should Buffalo want to hold off on extending him.

Market Valuation: $19.8M
Robinson has been one of the more underappreciated WRs in the game throughout his career, but Bears QBs have been better when he’s been on the field. His production holds up with the likes of Amari, Keenan, Michael Thomas, etc… and his next payday should reflect that (wherever it comes from).

Market Valuation: $8.5M
If the Bears win two rounds & Trubisky is a big reason why, there’s likely a franchise tag in his future. If not, the financial fall will massive. QBs who hit the market after their rookie contract just simply aren’t getting the same respect they used to, and are settling for “prove-it” deals ranging from Mariota’s 2 year, $17.6M deal in Vegas, down to Jameis & Cam’s near minimum contracts. A 1 year, $6M-$8M contract with a load of incentives seems to make sense.

Market Valuation: $32.3M
A rough 2019 has Baker trending more toward Ryan Tannehill money than Patrick Mahomes, but 2020 has been a very different story. The Browns may wait a year to make sure the consistency sticks, but overpaying a little today may mean value a few years down the road.

Market Valuation: $14M
Jones is dynamic both in the run and pass game, & has been a TD machine for the Packers over the past few seasons. With the franchise tag for the running back likely to drop under $10M for the upcoming season, this seems a no brainer for the two sides.

Market Valuation: $9.1M
The top centers in the game make $12M now, and Linsley was having a great year (#1 ranked according to PFF) before a knee injury paused his season. He'll likely garner a raise, but i'm not sure it'll be drastic.

Market Valuation: $19M
Leonard is a bit of a hybrid linebacker, who trends more toward pass rush then he does the run stop. In light of this, his valuation sits above the ILB threshold of $18M, and has a chance to push north of $20M now with players like Myles Garrett, Joey Bosa, etc well above this mark. Leonard holds a $1.4M salary for 2021, the final year of his rookie contract.

Market Valuation: $10.1M
Hilton still has big games in him, but at 31 the bigtime paydays are likely in his past. He comps well with Golden Tate, who locked in a 3 year deal at just under $10M per year. Hilton will likely test the market for a price, but returning to Indy seems to make a ton of sense.

Market Valuation: $7.3M
The top corners in the game now make $20M per year, and while Rhodes is 30, he ranked 12th among all CBs in 2020 according to PFF. Our valuation provides Rhodes with double the compensation he pulled in this past season ($3.75M).

Market Valuation: $11.4M
Tough to imagine the best QB in the game letting his center get away, though the transition from Mitch Morse to Reiter was fairly seamless. The Chiefs may not be able to afford this one…

Market Valuation: $8.5M
Johnson has quietly been a gem in the secondary for the Rams over the past 3 1/2 seasons. The former 3rd round pick is inline for a nice raise, especially if he hits the open market.

Market Valuation: $9.5M
It’ll take plenty of creativity from the Saints front office to keep this roster intact, but Williams has been a top 10 safety over the past two seasons, and will likely require $10M+.

Market Valuation: $5.4M
The pending free agent has had issues staying on the field, but he’s a more than serviceable running back when healthy. Mark Ingram’s 3 year, $15M contract seems to be a good comp here.

Market Valuation: $15.6M
The shine rubbed off a bit on JuJu in 2020, as he joins a loaded list of WRs set to hit the open market. His current valuation puts him inline with the deal Cooper Kupp just signed in LA.

Market Valuation: $7M
Fumbles and a lack of production in the passing game keep Carson’s valuation tempered. He’s likely looking at a deal similar to the 2 year, $16M one Melvin Gordon locked in with the Broncos, and Seattle should strongly consider keeping him.

Market Valuation: $8.5M
Age isn’t slowing Wright down, who’s having maybe his best season to date at 31. Seattle needs to improve defensively across the board, but a 2 year, $17M extension here probably makes sense.

Market Valuation: $17.1M
Godwin on the open market has a chance to really find some money. The $17M+ here represents his role as a WR2 with plenty of weapons around him. But a team looking for a true WR1 (Miami, Houston, etc) would have to value him as such.

Market Valuation: $19.5M
Barrett turned a prove it deal into a franchise tag. He was never going to repeat his 19.5 sack, 6 forced fumble performance from 2019, but an 8 sack, 57 tackle year is probably about right going forward. Our math wants to make him a near $20M pass rusher, but conventional logic says he’s probably more in store for a cap adjusted version of Preston Smith’s $13M per year deal.

Market Valuation: $10M
6 months ago this would've seemed impossible, but Davis & Tannehill have clearly found something in the final year of his rookie contract. If Tennessee considers him a viable WR2 going forward, the $10M price tag seems about right.

Market Valuation: $8M
An underrated weapon at a position with not many superstars, Jonnu Smith is a pending free agent with a strong payday in his future, wherever it comes from.

Market Valuation: $11.5M
Scherff is having his best season to date on the franchise tag, and despite a mathematical valuation of $11.5M, should push to reset the guard market at $14M+ this offseason. WFT’s O-Line has been great, and should be worth paying to keep together.

Market Valuation: $10.5M
Darby’s been playing on one year near minimum deals for the past two seasons, but has been outstanding after taking almost every single snap for WFT in 2020. A multi-year extension somewhere in the 4 for $40M range makes sense for both sides.