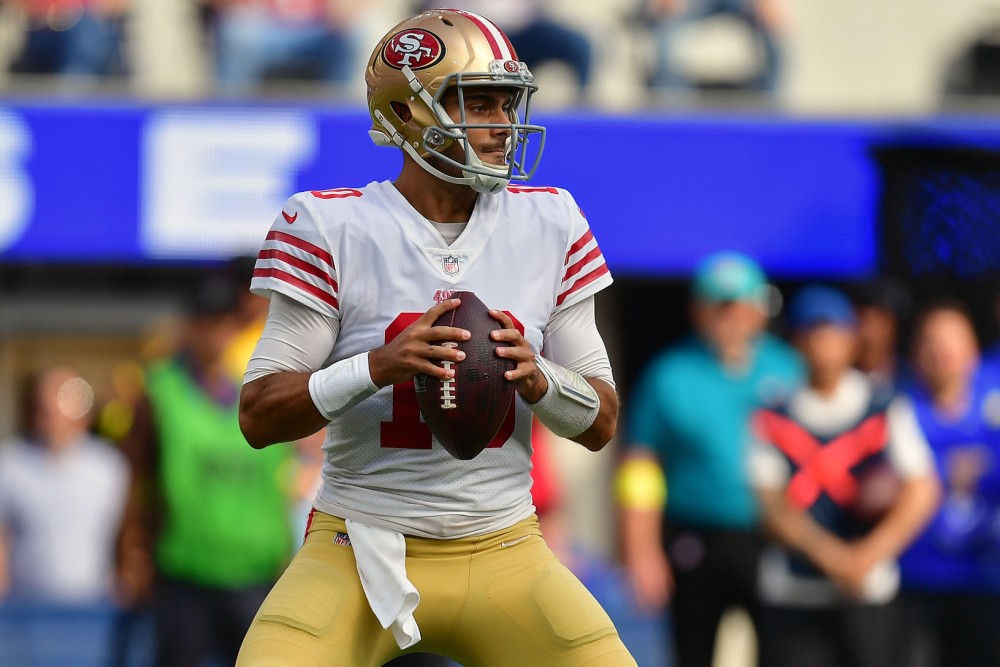 Jimmy Garoppolo’s return to San Francisco was questioned by many as just another misstep in the 49ers path to improving their QB1 position. But 11 weeks into the 2022 season (10 under Garoppolo’s reins) it’s hard not to readdress the elephant in the room.

At some point, the Niners will need to take this relationship for what it is - a match. Kyle Shanahan may want a more skilled player to run his offense, and every new draft class will offer up athletes that possess just that. But experience kills in American sports, and there’s no denying that Garoppolo’s understanding and comfort in this system is now unrivaled.

Furthermore, the addition of Christian McCaffrey makes a Jimmy Garoppolo-run offense even more potent, as it amplifies the short, quick passing attack that the 31 year old quarterback is most comfortable in.

With an expiring (yet growing) contract, and Trey Lance still seemingly the future of this roster, Garoppolo’s 2023 outlook is a complete unknown.

Trey Lance’s ankle injury (and subsequent surgery) will keep him out until the 2023 league year, but a full return is expected. Contractually, Lance holds a fully guaranteed 2 years, $6M plus a 5th year option for the 2025 season. The Niners have already paid him $25M.

Which teams might be interested? More than a few. Atlanta, Carolina, Detroit, Houston, Indianapolis, Las Vegas, New England, New Orleans, both New Yorks, Seattle, Tampa Bay, Tennessee, & Washington all have at least some need for a new QB1 over the next season or two. With 3 QBs projected into the first round this coming draft, and two more on the fringe, some of these teams will address their need via the traditional route. But a few here seem more inclined to drop in a veteran option: notably, the Jets, Commanders, & Buccaneers.

Should the 49ers consider keeping him? Common sense says the answer should be yes, but it still strongly feels like their internal answer is no. A healthy Trey Lance still (seemingly) provides this roster an ability to jump up another rung or two on the offensive ladder, and as a cost-controlled option, gives San Francisco flexibility to continue to add/retain pieces as needed. With that said - how many franchises would opt to let Garoppolo walk next March?

Garoppolo’s numbers are never going to pop off the page - he’s just not built for that type of production, nor is the current offense he’s being asked to run. So mathematically speaking, Jimmy G won’t project to a top of the market contract, even though the Niners paid him as such back in 2018 on an annual average basis.

Our current predictive market value for Jimmy Garoppolo calculates to $28.1M, almost precisely where his last multi-year contract ($27.5M) came in. With a league salary cap expected to approach or exceed $220M next March, a simple cap adjusted version of his last contract average brings his number up to $34M, or a projected 4 years, $135M.

Should multiple teams be involved, Derek Carr's $40.5M annual average could easily be in play here, as is his 53% of total value practically guaranteed. All things considered, our logical prediction for Jimmy Garoppolo's next deal rings it at 4 years, $150M, $75M practically guaranteed, $45M guaranteed at signing.

Often, free agent contracts are only as big as the supply/demand curve allows for within a position - even quarterback. So who else might be drawing big dollars on the open market next March?

Geno Smith (SEA, 32)
The comeback story of the year will result in a hell of a pay raise for the former #39 overall selection back in 2013. It seems unlikely that the Seahawks will let Smith walk, but at least a few of the teams listed above should have interest, potentially even more so than Garoppolo. Smith projects almost identically to Garoppolo right now in our system, though teams may be less inclined to go more than a few years with the smaller sample size.

Tom Brady (TB, 45)
Remember him? The #11 rated QB according to PFF is in 1st place in the NFC South right now, and hasn’t said one way or another about his 2023 playing status. We’ll assume he continues, which puts him into the open market (his contract contains a no tag clause). Brady projects to a 2 year, $82M contract in our system, though the $30M paycheck he earned in 2022 is probably suffice for his next stop. Will the Buccaneers try to keep this thing together, despite obvious setbacks across the roster? Does Brady have interest in joining a third franchise? The Raiders owe Derek Carr $75M over the next two seasons, but can get out of that with a February release. Is this a logical next spot (and price) for Brady?

Taylor Heinicke (WSH, 29)
Heinicke may be doing exactly what he’s supposed to be doing - filling in admirably as needed. It’s hard to imagine an organization - even Washington- compensating him as a true QB1, though crazier things have happened. If he’s signed in this capacity, Heinicke projects to a near $20M per year contract.

Daniel Jones (NYG, 25)
Jones might be the next iteration of Jimmy Garoppolo, despite a #6 overall draft slot. It doesn’t appear as though the Giants are poised to retain him in any capacity - even the franchise tag (projected $32M). He’ll likely be searching for a “compete” scenario next March, with Jameis Winston’s 2 year, $14M deal in New Orleans a likely target.

Lamar Jackson (BAL, 25)
This is a non-conversation until it isn’t. All expectations are that the Ravens will slap an expensive exclusive franchise tag on Jackson this February, despite the obvious cap restrictions it comes with. The bigger conversation might be if Jackson will accept/play on the tag - or if a holdout/trade demand is forthcoming. If the latter is the case, he becomes the most coveted option not named CJ Stroud/Bryce Young for 2023.