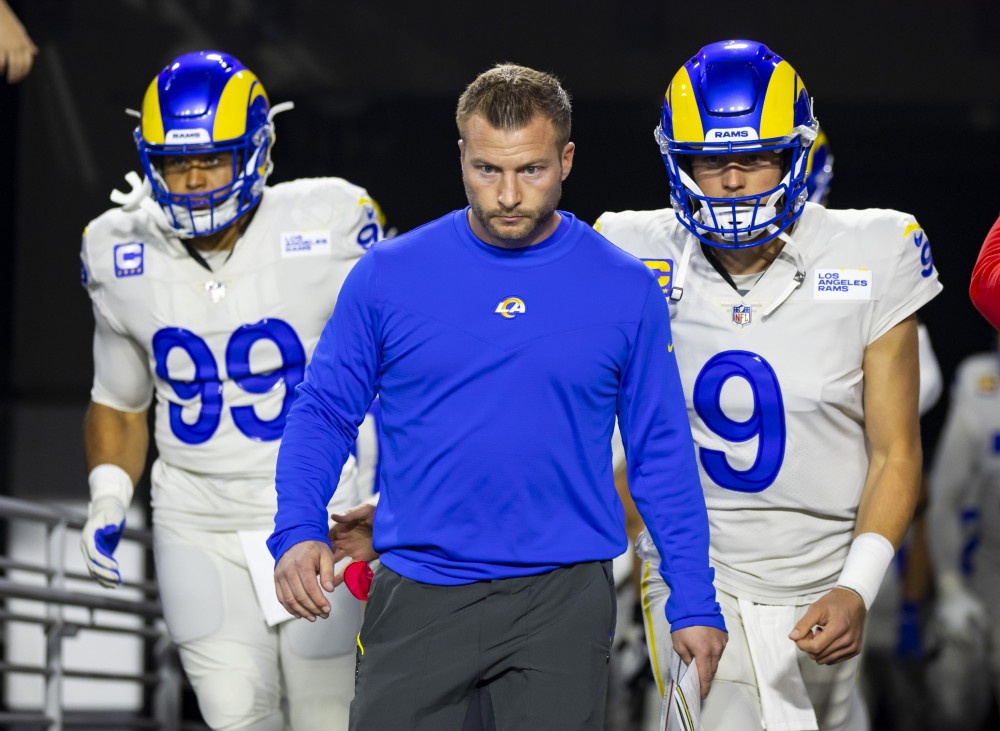 The Super Bowl Champion Rams enter the 2022 offseason with -$10M of projected cap space, and 48 players under contract, turning our immediate focus to just how much of this team can run it back next year. We'll take a deep dive into the contract status for every notable starter from 2021, discussing options to restructure, extend, trade, or release where applicable, and the predicted savings to the salary cap based on moves we anticipate could be made.

In essence, here's our look at how the Los Angeles Rams can free up nearly $100M of cap in the coming weeks.

Matthew Stafford
With 1 year, $23M remaining on his contract, the Rams have 3 legitimate options here:

Cam Akers
Has 2 years, $2.6M remaining on his rookie contract, none of which is guaranteed. He doesn’t become extension eligible until after 2022.

Darrell Henderson
Became extension eligible after 2021, but with back to back injury filled seasons, it seems likely he’ll be asked to play out the 1 year, $1M remaining on his rookie contract before decisions are made.

Sony Michel
Is slated for unrestricted free agency, likely to end up in a new spot for 2022. Michel carries a $5M valuation into the offseason.

Robert Woods
Has 4 years, $60.5M remaining on his contract, recovering from an ACL injury suffered in Week 11, but will certainly be back in the fold once he does so. His $3.5M roster bonus for 2022 is already fully guaranteed, and his $10M upcoming salary locks in on March 20th. If both of these figures are restructured, Woods’ cap hit for 2022 can be dropped from $15.7M to $5.7M.
Predicted Savings: $9.9M

Odell Beckham, Jr.
The torn ACL is brutal news for both he and the Rams, as the two sides really did appear to be a match-made-in-heaven scenario in their short time together. Will Les Snead throw OBJ a bone in offering a 2 year contract with a near minimum salary ($1.12M) for 2022 as he recovers, then a boost in pay for 2023 with plenty of incentives to build up his earnings as the production comes in? Beckham was trending toward a $12M-$15M per year contract before the injury.

Van Jefferson
Has 2 years, $2.4M remaining on his rookie contract and doesn’t become extension eligible until after 2022. He’ll be back with a bigger role

Tyler Higbee
Was missed in Super Bowl 56 (knee), and should be brought back for 2022. His $8M+ cap figure however likely needs to be addressed. With 2 years, $12.8M remaining on his contract, an outright extension isn’t likely, but a simple restructure fits the bill here. Reducing his $6.25M base salary down to the minimum $1.035M, while tacking on 3 void years to the back of the contract can reduce that 2022 cap figure by $4.1M
Predicted Savings: $4.1M

Brycen Hopkins
Has 2 years, $1.9M remaining on his rookie contract (none of it guaranteed), and carries a cap figure just north of $1M for 2022. He should be back.

Kendall Blanton
Holds a minimum $895,000 salary for 2022 and should factor as inexpensive depth.

Andrew Whitworth
The 40 year old left tackle was sensational yet again in 2021, but has all but said out loud that he plans to walk away from the game on top this offseason. Whitworth has 1 year, $16M left on his contract, including a $5.5M roster bonus due March 18th. If he steps away before that, the Rams can free up $16M of cap & cash by adding him to the reserve/retired list prior to that date.
Predicted Savings: $16M

David Edwards
Is entering a contract year in 2022, and is projected to get a salary boost up to $2.79M thanks to the proven performance bonus system. His $2.8M cap hit is still plenty of value for a starting left guard. Edwards is a mild extension candidate this offseason.

Brian Allen
Is a pending free agent, and a Top-10 rated center according to PFF. He’s a $6M player according to our valuation system, and should be highly considered to be brought back by the Rams.

Austin Corbett
Is a pending free agent, and the #22 ranked guard according to PFF. He’s a $9M player according to our valuation, and an extension candidate - but the Rams could look to add a few interior lineman via free agency for both upgrade and depth purposes.

Rob Havenstein
Enters a contract year in 2022, set to make $7.25M on a $9.5M cap figure. Havenstein was the 9th ranked tackle in football according to PFF, and Top-3 right tackle in this regard, making him an extension candidate this offseason. Bryan Bulaga’s 3 year, $30M deal with the Chargers is inline with his valuation.

Aaron Donald
Has 3 years, $52M remaining on his contract, including $14.25M cash & a $26.75M cap figure for 2022. Will he retire? Will the Rams blow out a massive 2 year extension? Will they offer a new signing bonus + a simple restructure to quantify the player and maximize the cap?

Greg Gaines
Should see a slight bump up on his final year base salary thanks to the Proven Performance Bonus system, now projected to carry a $2.7M cap hit. Is he a trade/release candidate to free up $2.5M of space? Seems more likely that Gaines is kept and A’Shawn Robinson is moved on from here.

A'Shawn Robinson
Has 1 year, $8M remaining on his contract, including a $9.5M cap figure. He was the #11 ranked interior defender according to PFF, putting him in extension candidate conversation. Is he also a trade candidate? Moving on before March 20th means $6.5M saved, but he’s probably too valuable to this defensive line to make that a real thought at the moment. Restructuring his base salary & roster bonus (adding 3 more void years) can lower his cap hit from $9.5M to $3.9M. As an extension candidate, Robinson projects toward Grover Stewart’s 3 year, $31M deal in Indy.
Predicted Savings: $6.5M via trade/release

Ernest Jones
The 3rd rounder enters year 2 of his rookie contract that has 3 years, $3.2M remaining on it (none of guaranteed). He won’t be extension eligible until after 2023.

Troy Reeder
Is slated for restricted free agency, likely headed for a $2.4M right of first refusal tender. He should be able stick at this price point.

Von Miller
Is slated for unrestricted free agency, and has already made it clear he plans to test the waters a bit. Is a return to Denver possible should they find an upgrade at the QB position? At nearly 33 years old, his days of cashing in are likely over, though statistically speaking Miller still projects to a $10M per year deal.

Jalen Ramsey
Has 4 year, $70M left on his massive contract, including $7.5M fully guaranteed in 2022, and another $12.5M that locks in March 20th. Ramsey restructured his base salary last season, pushing his cap figures up over $23M+ each for the final 4 seasons, but that likely doesn’t stop the Rams from doing it again this March. A full base salary restructure lowers his 2022 cap figure from $23.2M to $12M, freeing up $11.1M of space.
Predicted Savings: $11.1M

Darious Williams
Is slated for unrestricted free agency, and should be allowed to test the open market despite the Rams’ lack of depth at the cornerback position. Williams was once on pace for a top-tier CB contract before his play suffered a bit in 2021. He finished the season as the #64 ranked CB according to PFF.

Taylor Rapp
Enters a contract year in 2022, including $2.54M cash and a $2.9M cap hit. It’s very likely he’s asked to play out his contract before future decisions are considered.

Jordan Fuller
Enters year 3 of his rookie contract that includes 2 years, $1.9M remaining (none guaranteed). He’ll be extension eligible after 2022, and after a #19 rating from PFF last season, has a chance to make a decent bit of coin.

Johnny Hekker
The 32-year-old looked human at times in 2021, putting his 2 years, $5.2M remaining contract in a bit of question. There’s $2M+ to be freed up by moving on, and if the cap remains an issue late into the spring, this could be a surprise move.
Predicted Savings: $2M