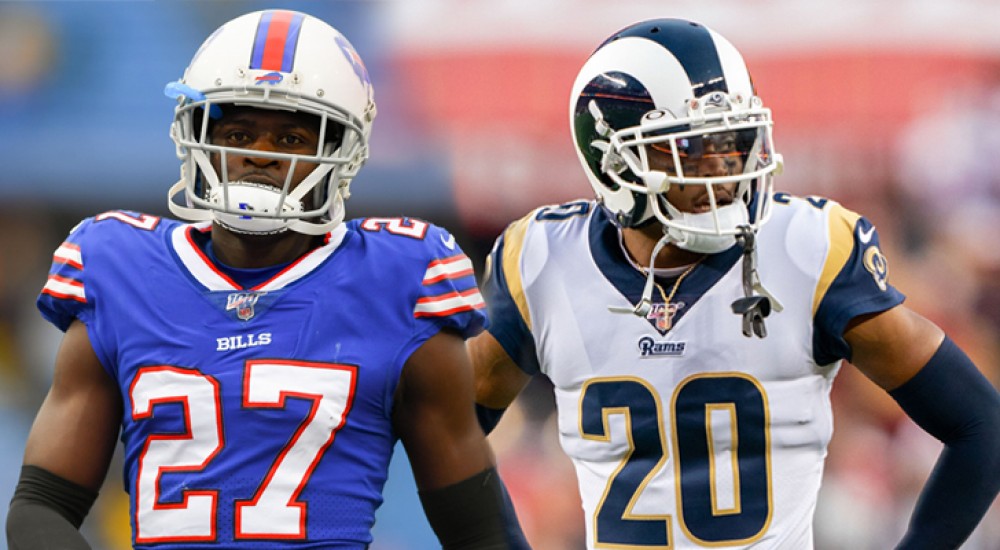 As expected the cornerback market was reset this month with the multi-year extensions for Tre’Davious White (BUF) & Jalen Ramsey (LAR). We’ll take a close look at these deals, understanding just how much separation exists between the two deals, signed almost simultaneously. 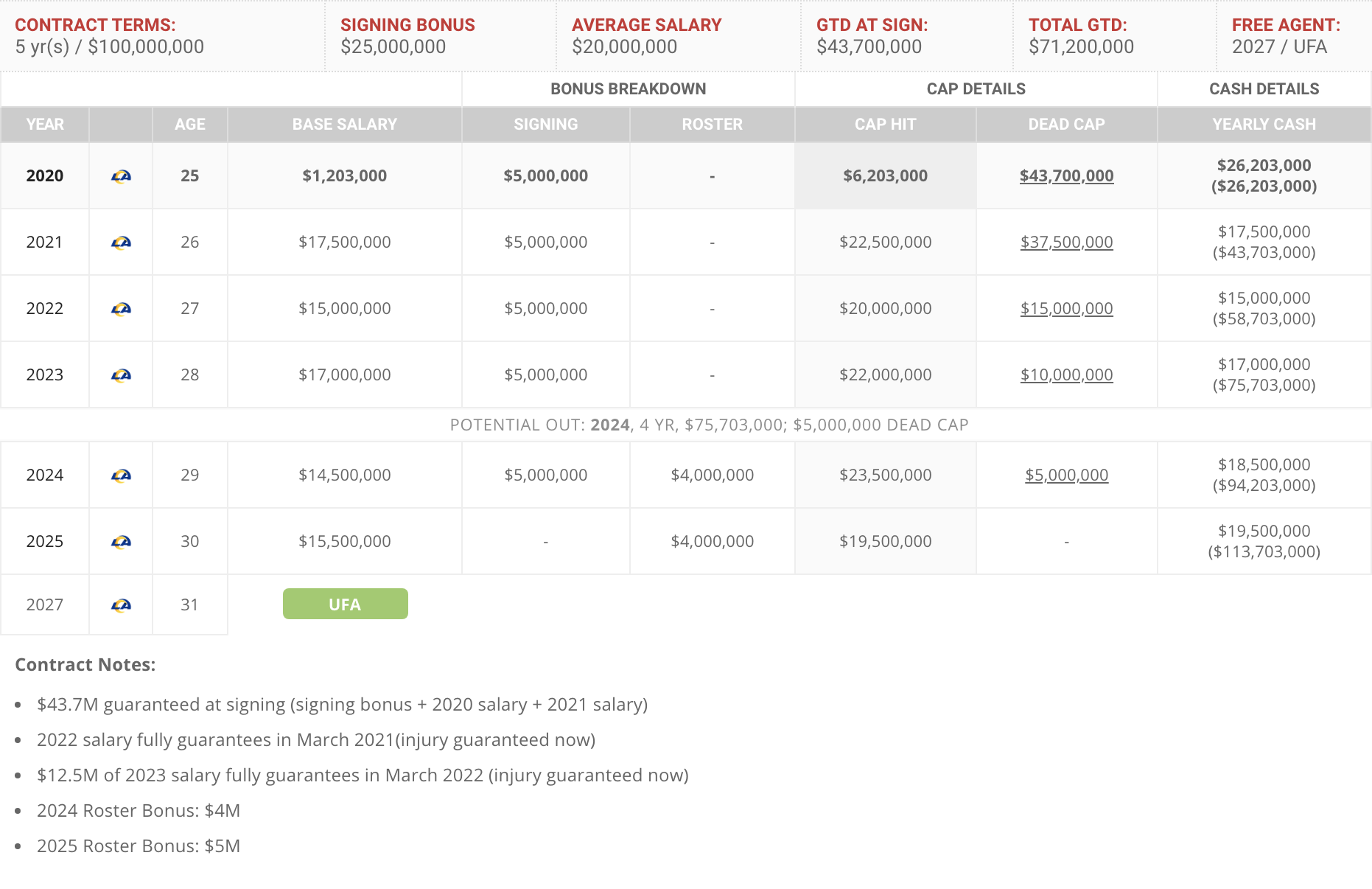 Often times blockbuster extensions lose substance as we dig deeper into the details. That’s just simply not the case here for Ramsey’s contract, which ranks first in all categories with the exception of the upfront guarantees. However the $43.7M guaranteed immediately is a bit deceiving, as Ramsey has “guarantee mechanisms” built into both his 2022 & 2023 salaries, meaning they will become fully guaranteed a year early, making them almost certain to vest. By March of 2022, all $75.7M will have been paid or fully guaranteed.

Potential Out
In short, this is a 4 year, $75.7M contract before the guarantees run out, an adjusted AAV of nearly $19M - still tops in the league by a whopping $2M.

Cap Management
The new deal drops Ramsey’s 2020 cap figure from $13.7M, to $6.2M, a savings of $7.5M to the Rams this season. This figure jumps to $22.5M in 2021, but the Rams almost CERTAINLY built in an automatic restructure that will convert $16M or so of his base salary into a signing bonus, dropping his cap hit next year to around $9.3M. In other words, the cap space saved in 2020 will rollover and nearly pay off all of his 2021 cap figure - a veritable wash for the first two seasons.

With the restructure, Ramsey will carry cap figures of $23M, $25M, $26M & $22M the rest of the way. Assuming the league salary cap bounces back by 2022, these should be tenable for the Rams.

Cash Flow
Byron Jones’ free agent deal with the Dolphins offers the next best cash flow to Jalen Ramseys, but in truth it pales in comparison. 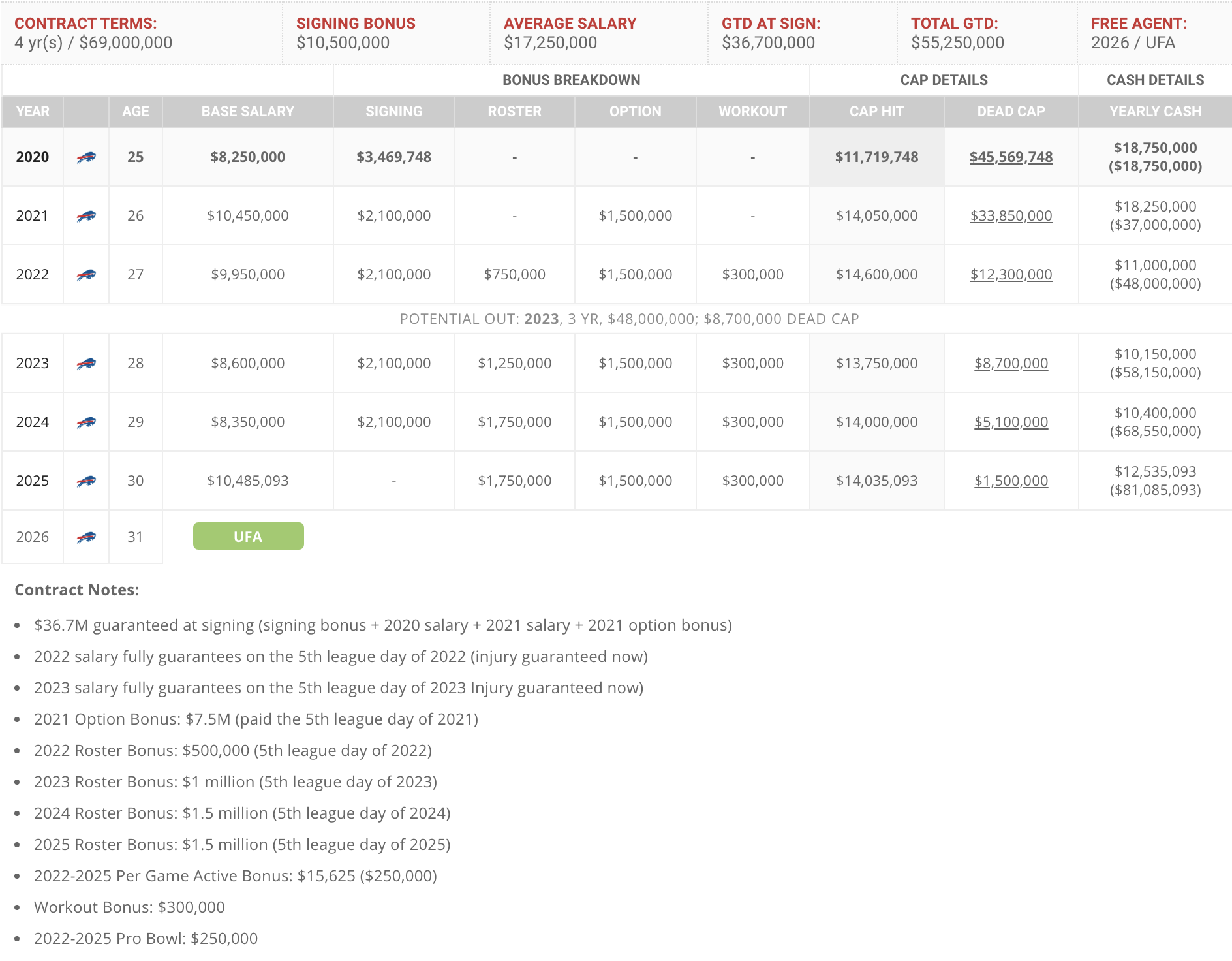 The most important point to remember here is that Tre’Davious White had two years remaining on his rookie contract with the Bills at the time of this signing ($12M cash), so it wasn’t imperative that Buffalo structure his cash flow as aggressively as the Rams did with Ramsey. With that said, the proof is in the above rankings.

Potential Out
White will see 3 years $48M from this deal before a rolling guarantee on his 2023 salary becomes an essential option for the Bills. Assuming he sticks on this contract through that point, he’ll see $58.15M over the next 4 seasons, an adjusted AAV of $14.5M - $4.5M less than Ramsey’s.

Cap Management
The Bills were in a much better place financially speaking than the Rams were at the time of this contract, but all teams are looking to reduce their cap allocations over the next two seasons for obvious reasons. A looming potential extension for QB Josh Allen next summer was also a consideration for his White’s deal is structured.

It’s also possible Buffalo frees up a bit more space with a restructure of White’s $10.45M base salary next season. A full restructure would free up an additional $7.5M of cap space for the 2021 season.

Cash Flow
White’s contract also contains more “bells and whistles” than Ramseys, including per game active bonuses of $250,000 the final four seasons, and a $300,000 workout bonus the rest of the way. Small, incremental March roster bonuses are built into 2022-2025 as well, offering a bit of a staggered cash approach for the player.

When Jalen Ramsey’s deal was announced, it was clear as day that Tre’Davious White’s contract wasn’t in the same stratosphere. However, with the details now laid out in front of us, it’s clear that White’s deal isn’t even 2ND amongst his position in many of the major categories. Buffalo scored a fairly team-friendly deal from their All-Pro DB.

In terms of Ramsey, did the Rams reach too high? As many have noted, the trade compensation that brought Jalen to LA (two first round picks & a 4th round pick) immediately pushed his contract demands to a new level. Subsequently, the WR market continued to rise this summer, with DeAndre Hopkins, Keenan Allen, & Amari Cooper eclipsing the $20M mark. The cornerback market has long been trying to keep up with the rise of the WR numbers, so the push to $20M was always in play here, and Ramsey’s base value reaches that plateau exactly.

Who benefits next? The player most likely to see a financial gain isn’t even a cornerback. Newly acquired Seahawks safety Jamal Adams now sits as the next player to be traded for two first rounds picks (plus a 3rd, & a player) with his eyes on a sophomore contract extension. The current high bar at safety is Budda Baker’s new $14.75M mark, a figure Adams should easily surpass in a year or so (his contract will not be addressed until after the 2020 season per terms of the trade).