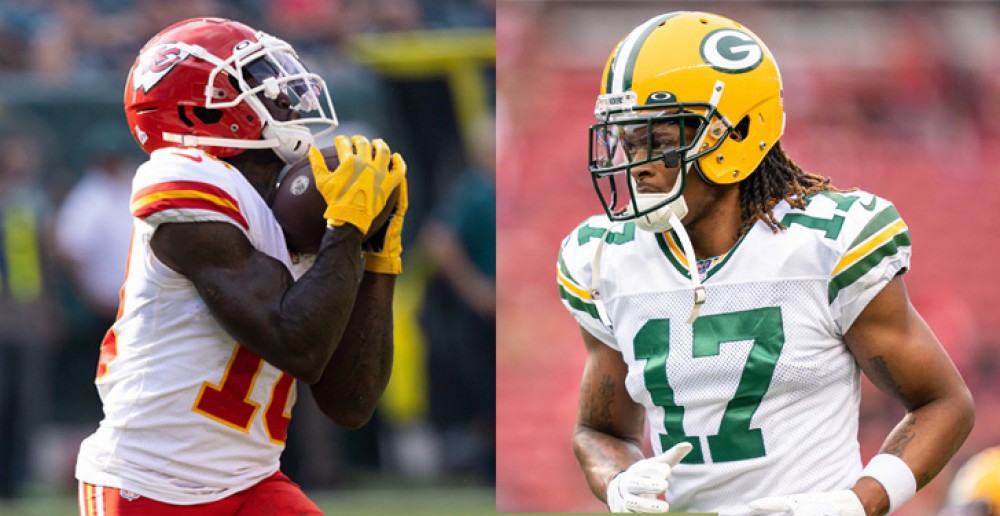 The NFL superstar carousel continues to turn, as the league saw two of its Top 3 Wide Receivers both traded, and in turn extended to historic contracts over the past few days. We’ll take a deep dive at the new contracts for Davante Adams & Tyreek Hill, comparing a few notable metrics for each over the next few seasons.

Tyreek Hill just turned 28 years old on March 1st. Davante Adams turned 29 last Christmas. Hill has 668 touches (+68 returns) in his 6 year career, while Adams has 669 in 8 seasons. In terms of Approximate Value (Pro Football Reference’s “WAR” stat), Adams clocks in at 77, with Hill coming in at 74. There’s an awful lot of crossover here.

Each deal contains a favorable cap structure for 2022 (of course), and a sizable roster bonus in year 2 that will almost certainly be restructured. Just how much of 2023 is restructured could factor into the “potential outs” of these contracts respectively. If all $25M+ of Tyreek Hill’s 2023 salary is restructured, it almost ensures he’ll get a 4th year out of the contract. While it’s not as cut and dry for Adams, a full 2023 restructure on his deal means $22.6M of dead cap in 2025.

It’s clear that Tyreek Hill’s deal far exceeds Davante Adams’ contract in almost every measure. But keep in mind that Hill & agent Drew Rosenhaus had Adams’ contract to reference here. Whatever the contractual plan was for Hill 2 weeks ago, that changed immediately the second Las Vegas pulled off the trade & sign.

Being one year younger shouldn’t hold too much weight here, but it certainly helps ease Miami’s pain when it comes to significantly higher bonus & guarantee structures, and a lack of per game active bonuses.

Could the Packers & Chiefs have afforded these deals? Your cost to park, drink, and buy a jersey should answer that question. Could they have made the salary cap work? (See: New Orleans Saints, 2010-2022). But in each case, the draft compensation acquired by moving on will not only turn into an immediate high-profile WR in the upcoming draft (of which there are projected to be many), but also potential starters in other positions either this or next season.

Are Tyreek Hill & Davante Adams immediately replaceable? No. Each have proven experience, and postseason success that can’t be replicated by even the best 22 year old wideout. But the business side of these moves set up the Green Bay and Kansas City franchises to continue to thrive as a whole, especially knowing that each is fully committed to an elite QB1.