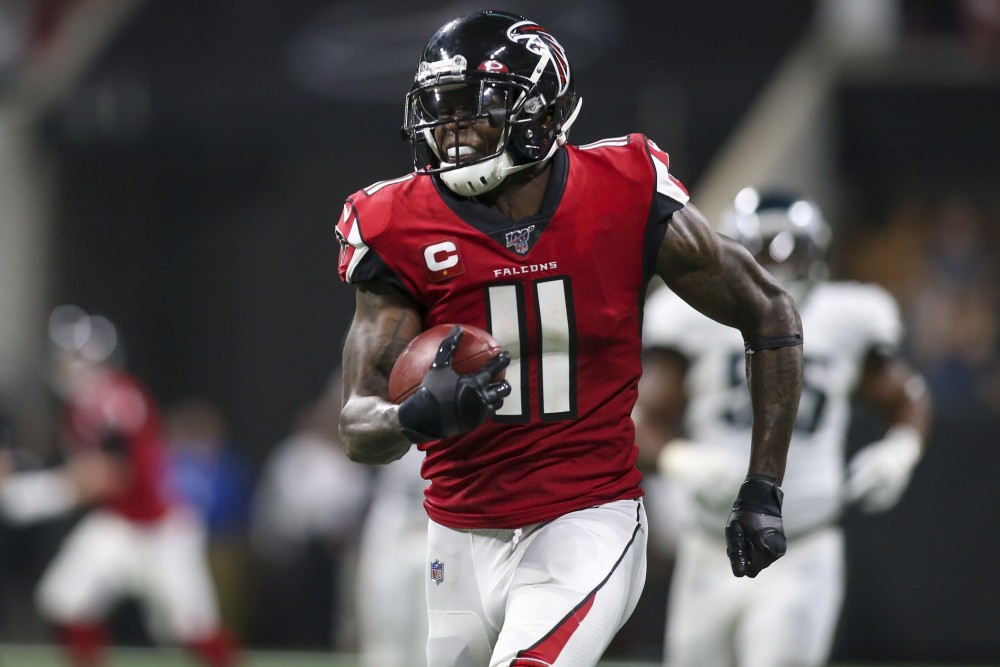 Julio Jones is 30, but his production is still nothing short of elite. With 4 straight 90+ grades from Pro Football Focus, including a 1,600 yard, 8 TD season in 2018, the sky should be the limit in terms of dollars for a new contract. After an ugly holdout last summer, Jones accepted a slight restructure (cash only) prior to the 2018 season, with the promise that a more formidable extension would be coming prior to 2019. We’re just 2 weeks from training camp now, and no contract of any sort has been agreed to.

30-year-old WRs don’t usually break the bank, but Jones has the benefit of using Antonio Brown’s outstanding deal in Oakland to start from. The two major statistical deficiencies for Jones have been a lack of scoring, and a ton of drops. But neither should play a huge role in negotiating down an annual number going forward. Jones is currently slated to earn $21M over the next two seasons, but that will need to push more toward the $35M mark on his new contract, nearly all of that fully guaranteed.

The last time Tom Brady put his pen to a legitimate extension was in 2016, when he signed a 2 year, $41M new money extension that carried out over 4 years (he then restructured last offseason to pull some cash forward). If we’re evaluating Brady like we do every other player in our system, he’s produced to a $34.7M AAV over the past two seasons - but that’s not how he operates. Brady’s $20.5M AAV back in 2016 represented 13.2% of the league cap at the time. If we use this as the framework for a current deal, we’re talking about a contract just shy of $25M per year in 2019, which feels about right for the almost 42-year-old.

I know the natural discussion will be to place Green in the same conversation as Antonio Brown, Julio Jones, Michael Thomas contracts, but from a mathematical standpoint, it’s really hard to get him there. The soon to be 31-year-old has missed 13 games over the past 3 seasons, so his numbers are a shell of what they used to be. Even when projecting out his per-game stats to a full 16-game season, Green’s numbers fall well short of the current elite WR contracts in the league.

His closets comparable currently is Bucs WR Mike Evans, who signed a 5 year, $82.5M extension last March, at age 25. Green is coming off of a contract that averaged $16M per year (4 years, $60M), and it stands to reason he won’t be garnering much of an increase on that number with his new deal.

It’s been awhile since we’ve heard buzz out of Dallas about the forthcoming extensions for Prescott, Cooper, or Elliott. Many assumed Dak’s deal would be done by now, with Cooper’s on the cusp heading into training camp. But it’s also very possible the Amari’s camp is holding tight on agreeing to anything until the likes of Michael Thomas, Julio Jones, and even Beckham Jr. are granted new contracts first. Cooper’s set to earn a decent $13.924M salary on his 5th-year option in 2019, and could have a $17M franchise tag awaiting him in 2020 depending on how things pan out. That $31M over the next two years is a strong baseline for any type of multi-year contract being negotiated this summer. OBJ & Brandin Cooks each reeled in $38.4M over the first two years of their contract, a figure Michael Thomas should surpass in the coming weeks. If Amari waits (even into the 2019 season), he could be playing himself into a $40M over two seasons contract.

Ramsey’s had a lot to say off the field over his first three seasons, but he’ll soon let his contract do the talking. The 24-year-old has two years remaining on his rookie contract, and has publicly claimed he won’t be receiving an extension from the Jaguars this summer. But whenever it happens (assuming the Jaguars want to keep him), he’ll be inline to reset the cornerback market financially. Xavien Howard’s $15.05M AAV currently holds the top average pay belt, while Trumaine Johnson’s recent $34M over 2 years, $45M over three appears to be the benchmark for the next wave of CB contracts.

It’s safe to say the soon to be 26-year-old has surpassed expectations in his first three seasons in Tennessee. Set to enter a contract year in 2019, there’s been little said publicly about a new deal for Byard this summer, but it’s certainly a possibility. He’s slated to earn just over $2M in 2019, and could have a near $12M franchise tag awaiting him in 2020. In terms of a multi-year outlook, Byard also has the benefit of working on top of an explosion of safety money this past free agency. Earl Thomas, Landon Collins, & Tyrann Mathieu completely reset a market that now includes $14M per year contracts, $32M over the first two years, and $26M+ guaranteed at signing - all realistic numbers for Byard going forward.

The Falcons likely had a quick path to extending Jones this offseason, until C.J. Mosley broke the inside linebacker market this free agency (5 years, $85M, $43M fully guaranteed). With deals for WR Julio Jones, TE Austin Hooper, & DT Grady Jarrett also in the docket, Deion’s contract may be on hold at this point, and it’s possible he walks into free agency next March.

Jones is only 24, but is also recovering from a broken foot suffered in 2018, so there’s a bit of contention in terms of negotiation this summer. He’s still been one of the best middle linebackers in all of football over the past 2 1/2 seasons, and is slated to earn just $1M in 2019, the final year of his rookie contract. With Seahawks LB Bobby Wagner in a very similar position this summer, it’s possible the Falcons feel they won’t be able to meet Jones’ demands, and much like the Ravens were forced to do with Mosley, will see him eventually walk.

Gordon’s been a solid weapon for the Chargers since being #15 overall back in 2015, though he has been banged up nearly every season to date. He’ll enter 2019 on a $5.6M 5th-year option, and has all but said that he would rather be traded then play out this season on his current deal.

Gordon doesn’t have the receiving resume that some of the top-paid RBs in the game currently do, so his valuation falls a bit short of upper-echelon money, but he’ll still find plenty of offers should he be allowed to hit the open market. It should also be noted that his previous two years compare almost identically to Todd Gurley’s 2016-2017 campaigns, leading up to his major payday with the Rams, so there’s room for Gordon’s camp to push for a contract in the $14M range. But our math says otherwise for now…

Wagner’s been one of the most important pieces of Seattle’s puzzle over the past 7 seasons, and the 29-year-old should be rewarded handsomely for it. Entering a contract year in 2019 that’s set to pay $11.5M cash, Wagner should benefit from CJ Mosley’s explosive contract with the Jets, and a possible deal for Faclons’ ILB Deion Jones as well. Consistently graded one of the best linebackers in the game according to PFF, Wagner might be staring down a near $17M franchise tag in 2020 - a move that would likely not be taken well by his camp, but it’s also a pretty strong number to work with for a multi-year contract. With only Mosley’s contract near this number, it’s impossible to mathematically value Wagner near $17M a year (our algorithm brings him in just over $14M currently), but it’s still a likely price point.

Thomas has filled up the stat boards over the past three seasons, posting 321 catches, 3,800 yards, and 23 TDs, while averaging almost 12 yards per catch. He’s a shoe-in to reset the WR market at just 26 years old, but there are some potential roadblocks in the process. For starters, the Saints have VERY little cap space to work with in 2019. Next, Drew Brees’ contract expires after 2019, and his future is very much in question. Does Michael Thomas even want to remain with a Brees-less Saints going forward?

We’ll table those for purposes of this article and assume it’s about a new deal right now. Thomas is the first WR with a legitimate chance to see $100M attached to his contract, with $45M fully guaranteed, and $60M through 3 years.