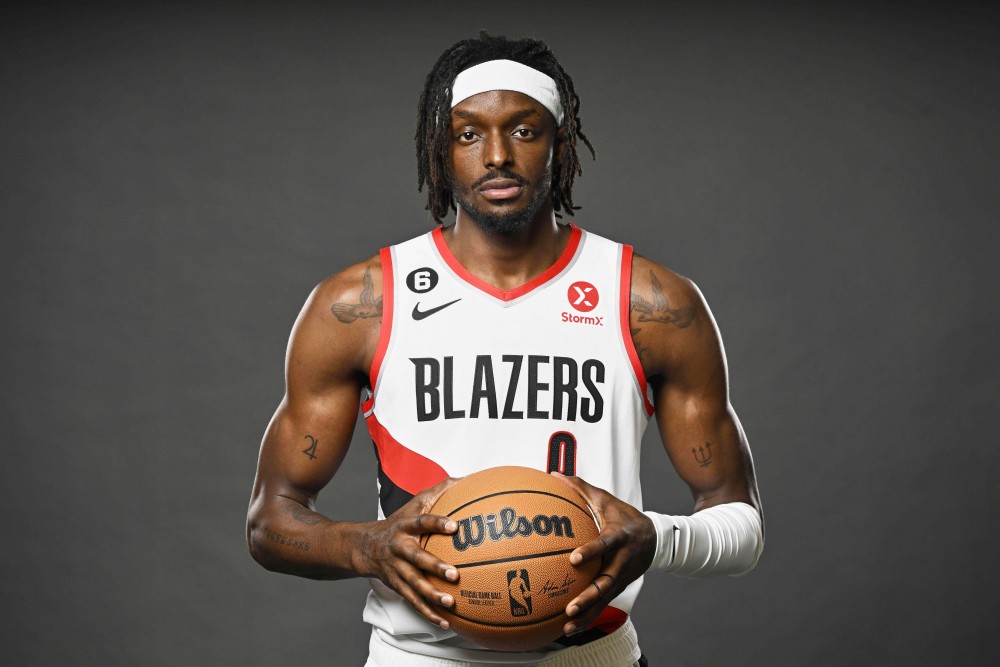 When Jerami Grant’s name first surfaced in trade rumors last season with the Detroit Pistons, attached to that scuttlebutt was that Grant would insist upon an extension from whomever traded for him. A salary north of $25 million per year was bandied about as Grant’s starting point.

When the Portland Trail Blazers traded for Grant, nothing about an extension was really even mentioned. It was a possibility, but it was something left for “down the line”.

The reasons for that were twofold. The first reason is that the extension rules weren’t really going to allow for Grant to be traded and immediately extended. Sure, Portland and Detroit could have turned the Grant deal into an extend-and-trade transaction, but Grant would have left both money and years on the table. He was also far more likely to sign a standard Veteran Extension, as opposed to an extend-and-trade deal.

The second reason for not extending Grant right away was that the Trail Blazers wanted to see how he’d fit on the floor with their roster first. Grant was coming off of two seasons with rebuilding Detroit where he spent most of the time doing whatever he wanted. Not in a bad way, but more that Grant was the central hub and could facilitate the Pistons offense however he saw fit. If you want to be negative, a narrative of “good stats, bad team” built around Grant, and it was one his efficiency numbers, or lack thereof, supported.

Now, Grant has spent a quarter of a season in Portland and he’s erased some of those efficiency worries. Surrounded by better talent, the versatile forward isn’t taking tough, late-clock, contested looks quite as often. Because of that, Grant’s efficiency is back up around the levels it was at when he played on good Thunder and Nuggets teams.

That puts us back to the extension conversation. Grant himself recently said it’s not something he’s focused on right now. There’s probably some truth there, but for a valid reason. Until January 6, Grant isn’t eligible to extend for more than the limits of what he could have gotten via an extend-and-trade deal. That means Grant has no reason to think about extending until that restriction lifts.

For Grant, when he’s eligible, the decision comes down to extending or waiting to cash in as an unrestricted free agent this fall. Let’s break down what Grant could be looking at contract-wise.

If you’ve followed along the Grant rumors, you probably heard the figures $112 million or $28 million thrown around for Grant. That’s probably because that’s the maximum he’d be eligible to extend for. Here’s what a full Veteran Extension for Grant would look like:

Given Grant is delivering on his currently nearly $21 million salary, and where the salary cap is heading, a contract that averages just over $28 million per season doesn’t seem unreasonable. However, it’s important to note that Grant will be in his early-30s throughout this extension.

Re-signing with the Trail Blazers as a free agent

Let’s say Grant continues to average 22.2 points, 4.3 rebounds, 2.7 assists, with a steal and a block per game. Oh, and let’s say he continues to hit for pretty great 47/47/76 shooting splits too. Grant may look for more than what he can get via a Veteran Extension. Here’s the max Portland could offer Grant as an unrestricted free agent this summer:

That’s the 30% of the cap maximum Grant is eligible for as a player with nine years of service. It also includes 8% raises off the projected first-year salary of $40.2 million.

That’s probably too much. Unless the Blazers feel really confident Grant is going to be an All-Star or All-NBA guy for at least three years of that deal, they likely won’t want to lock in that much long-term salary.

If, for some reason, Grant isn’t happy with the fit in Portland, he could leave as a free agent. It was somewhat of a shocker when he left a great situation in Denver in 2020 to sign with the rebuilding Pistons. So, there is some precedent. Here’s what a max deal with a new team would look like:

That’s the same 30% max in first-year salary, but it’s capped at 5% raises and only four years, as Grant would be changing teams.

This deal is about $60 million or so more than Grant would lock in via a Veteran Extension with Portland. In a summer where he’d rate as one of the best available free agents, Grant could cash in. Currently, five teams project to have enough cap space to offer Grant a max deal. If one of them gets desperate as free agent targets dry up, Grant could land a huge contract.

Jerami Grant is turning in an incredible season. With better talent around him, Grant has seen his efficiency go back up, even though he’s maintaining his Detroit-volume. That means Grant should be in line for a big contract.

The question becomes: How big? How much can you pay for a combo forward that is about to hit his early-30s?

The answer is likely to be: A lot.

Grant’s not going to land a max deal. The five teams in position to offer that aren’t really great fits. Unless the Indiana Pacers really want to accelerate their rebuild (and that would mean moving on from Myles Turner), none of the cap space teams have a real need for Grant. The Detroit Pistons have been there, done that. The Houston Rockets are already overflowing with forwards, same for the Orlando Magic. The San Antonio Spurs are prioritizing youth and spreading money around, while the Utah Jazz are sort of tough to peg, as they aren’t fully in rebuilding mode. At least, they aren’t there yet.

That makes an extension with Portland Grant’s best bet. The Trail Blazers only recently dug themselves out of salary cap hell. After clearing away C.J. McCollum’s deal, Portland was able to reset their books a bit. They re-signed Anfernee Simons and Jusuf Nurkic for a combined $170 million over the next four years, but that’s fine. They are both delivering on their new deals.

The Blazers also extended Damian Lillard again. That should keep him in Portland for the productive balance of his career. And Joe Cronin inked Nassir Little to a team-friendly extension worth $28 million over four seasons.

Now, look for Portland to lock up another member of their new core. Grant’s side will probably start by asking for the full $112.6 million over four years. It’s really not a bad starting point, especially with how well Grant has fit in with the Blazers.

If that’s a bit rich for Portland, they could always counter with something in the $26-$27M AAV range. That could look like this:

That’s an average of $26.5M AAV. That seems to be fair value, considering the deal will take Grant through his age-33 season. Ideally, Portland would structure the deal to decline in value, but that would likely have to wait until the offseason. Because of the 20% cap in the first-year salary bump on an extension, it’s hard to pay Grant enough in first-year salary that a declining deal would still give him enough overall value.

The next question: Is $6 million or so enough to really quibble over? If Grant wants the maximum amount of $112.6 million in a Veteran Extension, Portland should just pay it. They’ve finally got the versatile, offense-defense, combo forward they’ve been looking for. To lose him over $6 million would be bad business for the Blazers.

NBA Non-Taxpayers Who Should Add Salary At The Trade Deadline