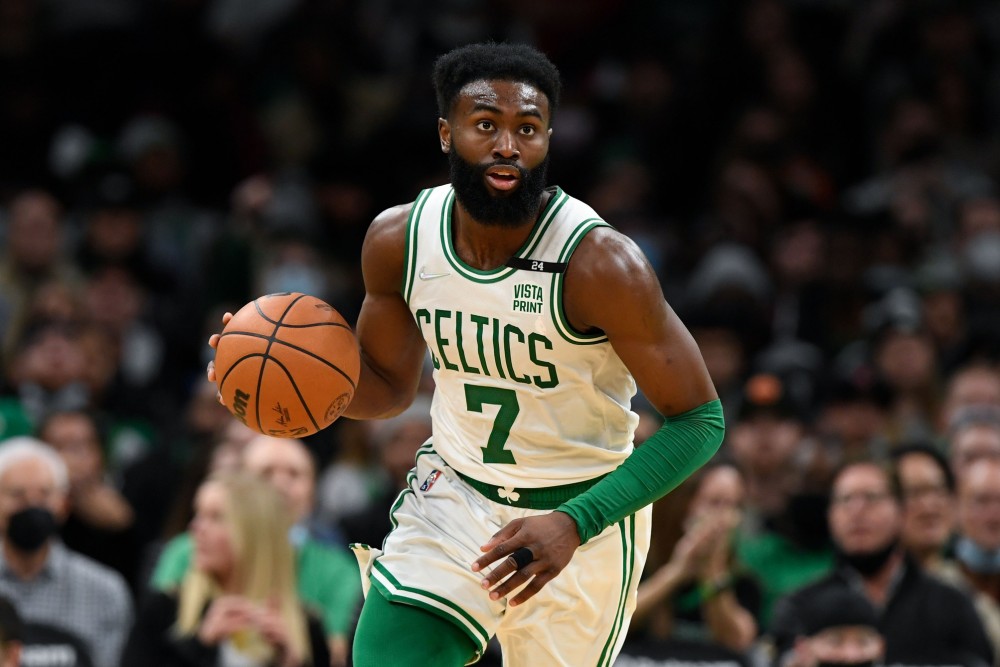 Jaylen Brown is freshly eligible for a contract extension from the Boston Celtics. Brown is halfway through the four-year, $110 million-plus extension he signed during the 2019 offseason. Now, it’s time for Brown to start thinking about his next deal.

Because Brown is in a bit of a unique spot, we’re going to break down a lot of different options here. What puts Brown in that unique spot is that he’s not coming off a Designated Rookie Extension. When Brown re-signed with Boston in the summer of 2019, he extended for four years (as opposed to five under the Designated Rookie Extension rules) and less than the full max.

First, let’s understand what Brown has left on his current deal:

By virtue of his own performance and Boston making a run to the 2022 NBA Finals, Brown triggered several bonus clauses that pushed his salary up. Yet, because he didn’t sign a max extension in 2019, Brown’s salary is still below the maximum amount it could be.

It’s important to note, it’s rare for an NBA contract be to renegotiated, unlike in the NFL or MLB. The circumstances to do so are rarely met, and the Celtics haven’t found themselves in that position since they inked Brown to his current deal. Long story short: Brown is playing on a slightly under-value deal, since he’s on a non-max contract.

All of the above puts Brown in an interesting spot. He’s not coming off a max deal, so his options are more varied than usual for a player of his status. Let’s dive in.

Because Jaylen Brown is now two years into his original four-year extension, he’s eligible this summer to sign an extension that is three years years in length. During the 2023 offseason, Brown would be able to add four years via Veteran Extension. Because he’s not currently on a Designated Rookie Extension, Brown isn’t eligible to extend for the maximum amount possible. (At least not yet. We’ll cover that next!).

That means Brown is eligible to do a standard Veteran Extension. And therein lies the rub.

A standard veteran extension allows Brown to extend for a 20% raise off the final year of his current deal with 8% raises in the subsequent seasons. In this case, Brown is set to make $30.7 million in the 2023-24 season. That would make the three-year extension look like this:

It’s highly unlikely Brown would sign a Veteran Extension before the 2022-23 season starts. It would combine the worst facets of being both under his market value, while also being shorter than the max years he could get in free agency or via an extension at a later point.

It’s very likely the final year of that deal would be a player option, given Brown’s status as a former All-Star who is expected to make more All-Star teams in the future. That would give Brown the opportunity to get back on the market for a fourth contract before his age-31 season in 2027.

In order to qualify for a Designated Veteran Extension, Jaylen Brown would have to wait to sign this extension until the summer of 2023. This is because players signing a Designated Veteran Extension have to have at least seven years of service at the time the extension is signed. Brown currently has just six years of service. (A year of service isn’t tacked on until the season completes. While this is Brown’s seventh season in the NBA, he doesn’t receive credit for seven years of service until after the 2022-23 season is completed.)

There are also criteria Brown must meet to qualify for the Designated Veteran Extension. To qualify Brown would have to achieve at least one of the following:

As you can see, the Designated Veteran Extension is significantly more lucrative for Brown than the standard Veteran Extension. It does involve Brown betting on himself to meet the criteria, but making All-NBA isn’t really a far-fetched scenario.

If Brown doesn’t meet the criteria for the Designated Veteran Extension in the summer of 2023, he could still qualify to sign for 35% of the cap with a big 2023-24 season. That deal would look exactly like the one above.

Much like the regular Veteran Extension, if Boston is willing to commit to Brown on a Designated Veteran Extension, it’s likely the Celtics would give him a player option on the final season. In this case, that would allow Brown to hit the market again before his age-32 season in 2028.

Another note: It’s also possible (as we saw with Bradley Beal re-signing with the Washington Wizards) that a “No Trade Clause” could be added into this deal. That’s allowed because it’s a new contract. That would not be allowed to be added into an extension. As Brown would have eight years of service, and four years of service with Boston, he’d be eligible for a “No Trade Clause”. Whether he would get it or not would be a matter of negotiation.

Re-signing with Boston as a free agent in 2024

Let’s say Jaylen Brown doesn’t want to commit to any sort of extension, or vice versa, Brown will be a unrestricted free agent in the summer of 2024.

That’s 30% of the projected $143 million cap with 8% raises. Again, it’s likely a player option would be negotiated into this deal as well.

Much like with the Designated Veteran Contract, Boston and Brown could agree to add a “No Trade Clause” to a standard contract via re-signing. Again, the difference is it being a new contract vs an extension.

Signing with another team as a free agent in 2024

Let’s say Jaylen Brown doesn’t want to commit to any sort of extension with the Boston Celtics, he’ll be an unrestricted free agent, for the first time, in the summer of 2024. In this scenario, let’s say Brown is ready to leave Boston after they considered at some level trading him for Kevin Durant, Brown would be one of the best free agents to be available in years.

If Brown wanted to leave the Celtics, he’d be eligible for the same 30% of the $143 million cap in Year 1 with another team. However, that deal would be limited to four years and only 5% raises. It would look like this:

Again, expect that final season to have a player option. There would probably also be the maximum 15% trade bonus included here as well. Free agents rarely leave their incumbent team without getting incentives beyond just salary in the deal with the new club.

Not nearly as lucrative as the Designated Veteran Extension amount with Boston, of course, but it also falls short of what Brown could get from the Celtics simply by re-signing. Even comparing only the first four seasons, Brown would be giving up about $7.7 million by leaving the Celtics. But it’s really that potential fifth year and the extra $64 million that makes the difference.

Extending with another team after being traded

If the Boston Celtics were to trade Jaylen Brown, his new team would likely want him to stick around long-term, ideally by getting him to ink an extension. In this case, nothing changes from the initial Veteran Extension options we laid out as far as the total salary goes. As a refresher, here’s what that Veteran Extension would look like:

However, there are some notable differences!

Whether he’s traded or not, it makes little to no sense for Jaylen Brown to sign a Veteran Extension either this season or next. Here’s what Brown would give up in each scenario:

There is little chance Brown would leave that much money, and flexibility, on the table to ink a standard Veteran Extension in the next year or two. Nor should that be the expectation of him.

Because Brown signed for less than the max in his original deal, and the cap is continuing to rise, he’s highly likely to forgo signing anything this offseason. Next offseason might be a different story.

Assuming Brown remains with the Celtics, both sides could agree to a Designated Veteran Extension in the summer of 2023, if he qualifies that season.  It’s not a reach, as Brown is coming off a season where he averaged 23.6 points and 6.1 rebounds per game in the regular season prior to a very productive run to the 2022 NBA Finals.

If Brown doesn’t qualify for a Designated Veteran Extension in 2023, then he’ll be an unrestricted free agent in the summer of 2024. He may qualify for the Designated Veteran Contract by virtue of a big 2023-24 season. If not, he’ll then look to cash in with the Celtics on a standard 30% max deal, or he could give up some money and move to a new team.

This offseason isn’t the time for Boston fans to worry about Jaylen Brown not extending. It simply doesn’t make any financial sense for a player of his ability. But if Brown makes All-NBA (or wins MVP or DPOY) in 2023 and we’re still waiting on an extension a year from now, it’s fair to get a little nervous if you’re a Celtics fan. That would mean Brown is passing on the largest contract he can possibly get.

If Brown is eligible and passes on signing a Designated Veteran Extension in 2023, it probably makes sense for Boston to consider trading Brown before he could walk for nothing in the summer of 2024. At that point, the confidence level he wants to remain with the Celtics would have to be fairly low, as no one passes up the so-called “supermax extension” when it’s offered.

Western Conference Buyers and Sellers at the NBA Trade Deadline

Eastern Conference Buyers and Sellers at the NBA Trade Deadline