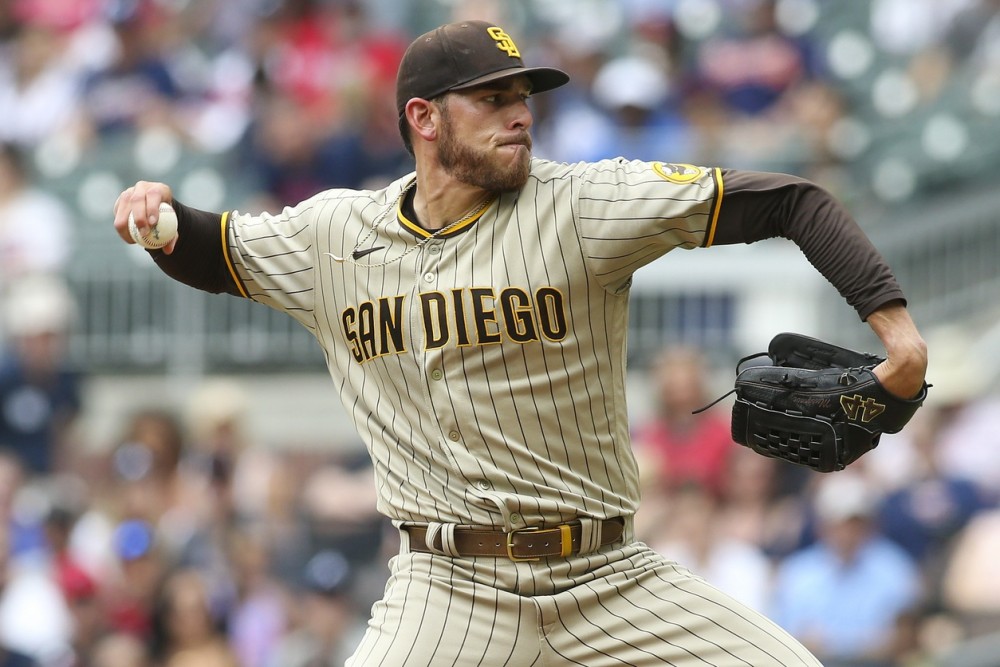 Joe Musgrove was a major part of the four player return Pittsburgh received when Gerrit Cole was traded to Houston in 2018. After three middling seasons with the Pirates, the suburban San Diego native was shipped home for the final two years of contractual control. He broke out in his backyard, posting career bests across the board highlighted by an August no hitter. Musgrove led Padres starters in wins, strikeouts and ERA and now completes his final year of arbitration as the SP2 of a deep but fragile rotation.

It’s possible 2021 proves to be the best season of his career but some think the ceiling is even higher. Considering the current market for starting pitching, Musgrove has already done enough to command a sizable contract next offseason but further development could position him for a huge deal. Even a repeat performance might give teams added confidence to offer more term following consecutive productive seasons.

Musgrove is off to a career start this season, posting a 1.90 ERA and .942 WHIP in 52 innings at the time of this piece. The Padres have won every start he’s made, and while his Ks per 9 innings are down slightly based on previous seasons, the home runs and walks against are WAY down. His adjusted ERA is 50, his Barrel % is under 6, and his Clutch Rating is above for the first time in 5 years. Everything points to a completely poised & comfortable pitcher right now, despite doing so in one of the deepest divisions in all of baseball.

San Diego boasts 6 players with an average salary of $10M+, but only two of those players are pitchers - and both, Yu Darvish/Blake Snell, were acquired via trade in the middle of their contract. In fact, the largest Padres pitcher contract ever handed out, is Drew Pomeranz' 4 year, $34M deal. 2nd? Another reliever: Trevor Hoffman's 4 year, $32M.

If we zoom out to the recent position player deals, each of the Manny Machado ($20M), Eric Hosmer ($5M), Fernando Tatis Jr. ($10M), & Pomeranz ($8M) deals include siging bonuses. Hosmer & Machado were afforded opt-outs after 5 years (Hosmer's becomes available this winter), while Tatis Jr. did not receive any options. In regards to salary structure, the process seems to vary. Machado was giving a flat $30M per year breakdown, while Hosmer's compensation is set to decrease mightily post the 2022 opt out ($20M down to $13M). As expected, early deals for Wil Myers & Tatis Jr. have smaller salaries through their arbitration eligibility, then sharp increases in their free agent years that flatten out into equal pay through the end of the deals. None of these major Padres deals contain deferred salary.

So where might a Joe Musgrove deal fall amidst this?

While this type of production most likely won’t last the next 4 months, even a slightly modified version of it puts him in line for a sizable payday as he approaches free agency. Musgrove entered 2022 as a fringe $20M/year player, but his 2-year production now calculates north of $22M, putting him on track for a 6 year, $134M contract. The deal can include oversized $25M salaries across the first three seasons, with the option for Musgrove to opt out of 3 years, $59M after the 2025 season.

San Diego currently has 11 players allocated to their 2023 40-Man roster, accounting for $162M of a $233M tax threshold. $36M of this however comes via player options, most of which are not likely to be exercised. With Sean Manaea also headed for free agency, and both Yu Darvish and Blake Snell entering a contract year in 2023, the Padres rotation is either due for a heavy overhaul - or a boatload of cash soon. Will Musgrove be the first to cash in? Early signs point to yes - and a hometown discount doesn’t seem to fit the bill.

Musgrove’s expiring year success heavily resembles Robbie Ray’s recent path to free agency, a season that scored him a 5 year, $115M guarantee with the Mariners. Marcus Stroman’s 3 year, $71M deal can be viewed as the “bad team overpay” version of this based on comparable numbers, but it comes without doubt that should San Diego let Musgrove hit the open market, he’ll have a dozen or so suitors. With tax thresholds increasing, Kevin Gausman’s 5 year, $110M contract should become the foundation for Musgrove, even if he joins a contending team.