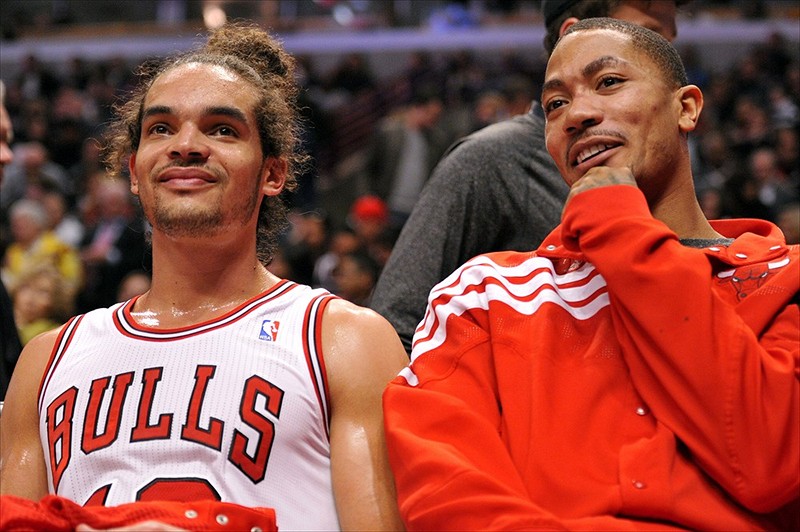 The Chicago Bulls are currently 12-9, which depending on your level of optimism coming into the 2012-2013 NBA season is probably about where you figured they would be at this point.

Among the teams Chicago has defeated are ones you would expect them to have a measure of success against even without franchise player Derrick Rose.

Sacramento, Cleveland, Orlando, and Phoenix certainly fall into that group. Losses to Oklahoma City, Boston, and the Los Angeles Lakers can’t be seen as particularly surprising.

Reports out of Chicago, you can choose to put as much or as little weight in them as you prefer, are stating that Rose could be able to return to practice in a few weeks. That would potentially put him on course to make a return to the lineup early in 2013.

Bulls fans probably have the date embedded in their memory, but for those who don’t Rose tore the ACL in his left knee April 28. Surgery to repair the ligament took place May 12. Eight-to-twelve months was set as an estimated recovery timetable.

Rose, from all indications, is on schedule in his rehabilitation process and has been reportedly sprinting and doing drills that involve making cuts, which has led to increased speculation the three-time All-Star could be nearing a return to game action sooner rather than later.

The next, obvious question would be whether or not the Bulls should bring Rose back this season or would it better to focus on having him from day one of the 2013-2014 campaign and plan accordingly until then.

In the grand scheme of the Eastern Conference the return of Derrick Rose this season probably doesn’t make Chicago an immediate threat to Miami, Brooklyn, or Boston, the popular choices to face the best from the west in next year’s NBA Finals.

At this moment the standings show the Bulls in the fourth position in the Eastern Conference and leaders of the Central Division. As currently constructed is Chicago one of the top four teams in the East? I would say no. Are they a playoff caliber team? Given the bottom portion of the conference they probably are. With Rose the Bulls are clearly a better team. But what Rose would they get? My guess is one not as explosive as we have become accustomed to seeing. And while it would be Derrick Rose on the court, it wouldn’t be Derrick Rose. Anything less would still make for a really good story, but not necessarily provide optimal dividends in terms of performance and ultimately wins.

At Spotrac we like to examine things from a financial perspective because we provide you with ample monetary data, but it doesn’t take in-depth analysis by the research team to tell you the Chicago Bulls have made an enormous investment in Rose. You can see the breakdown of his five-year deal here. It goes without saying the franchise will not allow its prized asset to return until he has received the necessary approvals and green lights from physicians, greatly reducing the chances of a comeback causing further damage to the knee that could result in long-term issues.

Derrick Rose is not only the best player on his team, but in the handful of elite players in the NBA. His 2011 MVP Award is a testament to that. This means the manner in which the Bulls handle Rose’s return will be scrutinized and put under the most intense of microscopes. Chicago in the unenviable position of having to navigate through a difficult circumstance and make a decision that is sure to be met with both praise and criticism, one they could be forced to make sooner than they may have initially expected.