THE CAP IS A MYTH. No, it really exists, it’s just extremely fluid and able to be manipulated at a moment’s notice. With that said, as quarterback contracts continue to rise at the rate they have been, any team with a well-paid player at the position will eventually need to come to a “reckoning” point with the salary cap hits of that particular contract (even if they kick the can down the road 4-5 times).At some point in the near future, a QB with an absurdly high cap hit will go on to win the Super Bowl. But until that happens, we offer you the following (visual breakdown below):

One of the metrics we track is the percentage of league salary cap that each player represents based on their own cap hit in a given year. In this regard, we can compile a list of all the starting QBs to make a Super Bowl, and their respective cap percentage.

The Highest Cap Percentages to Reach a Super Bowl

Going back to the year 2000, the QB who reached the Super Bowl with the highest percentage of league salary cap is Peyton Manning, whose $23.2M cap hit in 2009 represented 18.8% of the league cap. The Saints beat the Colts that year.

What About Winning the Super Bowl?

At 12.61%, Tom Brady’s 2021 Super Bowl victory with the Buccaneers made him the highest cap-percentage quarterback to ever win the game, surpassing his 2018 victory with the Patriots, when he represented 12.42%.

This Metric On Average

This year’s final two QBs certainly fall in line with the trends, as Matthew Stafford’s $20M cap figure in LA represents 10.96% of the league cap, while Joe Burrow’s 2nd year figure calculcates to just 4.51%. If Burrow were to win the Super Bowl, the median figure for winning QBs since 2011 will drop to 8.8%, falling under the median for losing QBs (which would increase to 9.07%).

This would further enable the point that putting too many chips into one basket is risky business, even if that basket (a.k.a the Quarterback) represents one of the most important positions in all of sports.

We spent so much time this year discussing the Carson Wentz situation & how he left a $33M dent on the Eagles' salary cap this year, but we've glossed over how the Ram's have not only been in a similar situation - but with far bigger numbers.

If we include ALL QB cap hits for 2021 (active, reserve list, practice squad, & dead cap), the Rams hold the most Quarterback cap in the NFL by a wide margin. In fact, the $46.2M allocated to Rams' QBs in 2021 is the 2nd most of all-time, behind the 2020 Colts. ($56.5M), who were still reeling from Andrew Luck's retirement, a careless Jacoby Brissett extension, & a cup of coffee for Philip Rivers

A Breakdown of Our Quarterback Super Bowl Cap Data 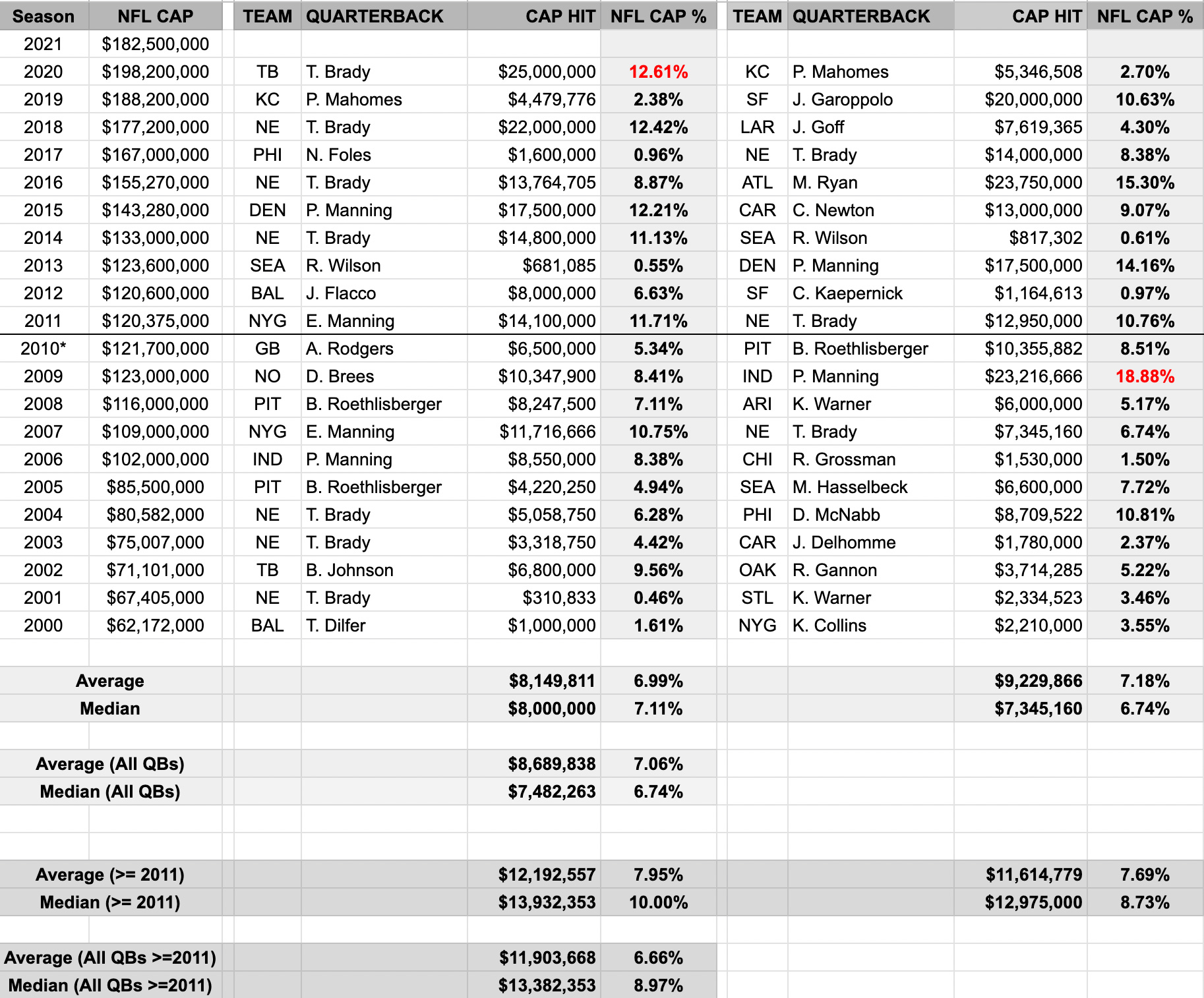 Only 10 days removed from the biggest trade in recent history and Juan Soto is already headed back to Washington as the Padres travel east for a weekend series against the Nationals. The failed contract negotiations and subsequent fallout is fresh on everyone’s mind and Soto will be eager to have a big weekend.

The NFL Next Contract Roster

As the 2022 NFL regular season approaches, we'll push ahead to players from each position who are positioning themselves for big paydays in the coming months.

The betting focus this weekend turns to the Blue Jays & Twins, where former Minnesota ace Jose Berrios will face their new arm Tyler Mahle with playoff ramifications on the line.

Which recently signed offseason wide receiver contract would you rather have on your team?

Breaking down the initial 2023 cap space projections now that the 2022 offseason dust has settled.
Tweets by spotrac