Don't feel like reading? Watch a visual breakdown of this contract here. 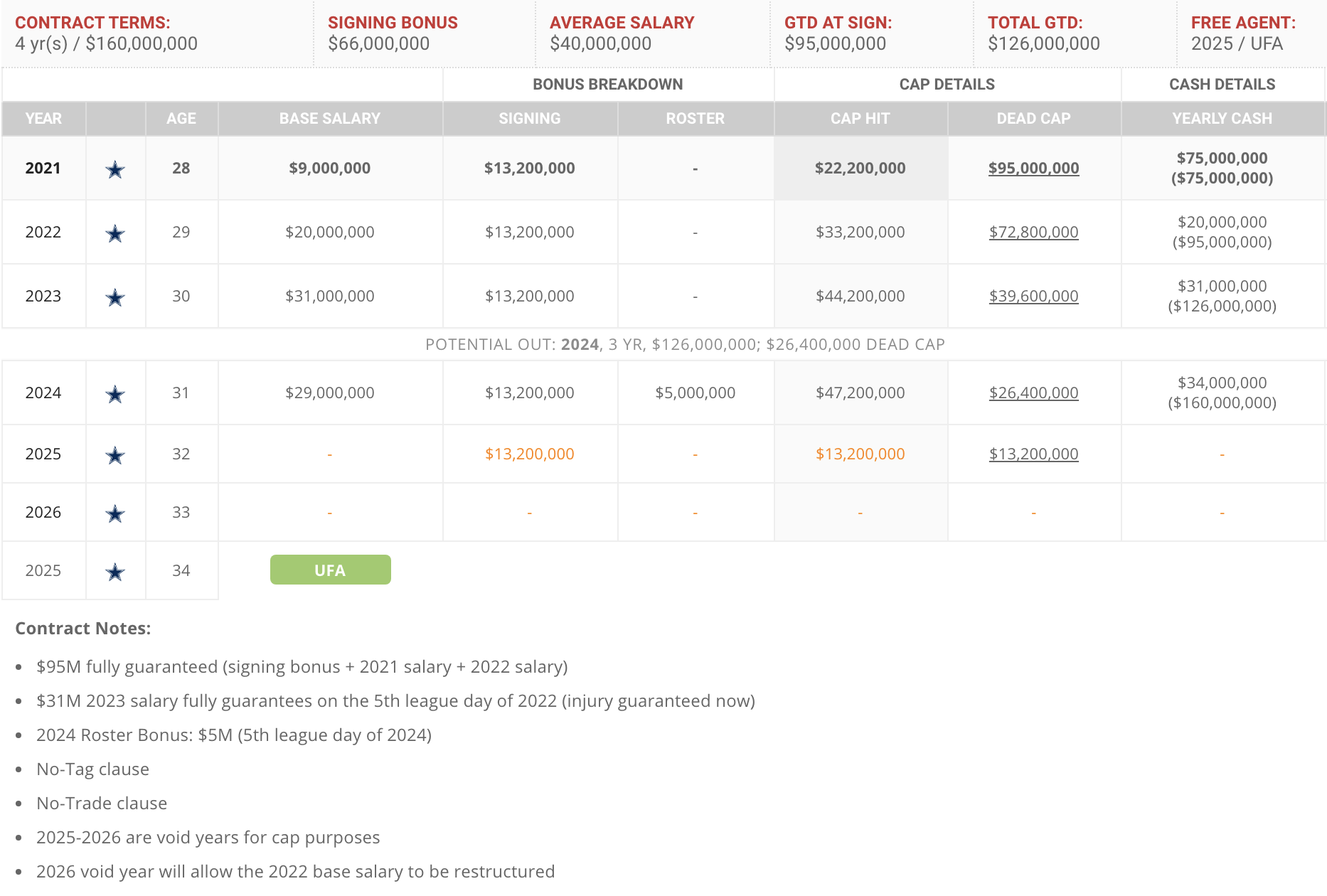 Breaking Down the Guarantees

As previously stated, Dak Prescott's new contract comes with $95M fully guaranteed at signing, most in NFL history. This is comprised of the $66M signing bonus, a $9M salary in 2021, & a $20M salary in 2022. The remaining $31M 2023 salary is (importantly) guaranteed for injury right now, and converts to fully guaranteed on the 5th league day of 2022, a year before it will be paid out. This all but ensures a $126M payout over the next three years, or $42M per year through the guaranteed portion of this contract. If Dak is still on this contract in March of 2024, a $5M roster bonus is due in the 5th league day.

The Cowboys wanted a longer team contract in order to spread out the cap as much as possible, while also ensuring Dak would be under their control for as long as possible. Dallas compromised the latter, adding two void years to the back end of this 4 year contract to maximize the bonus proration. Signing bonuses are allowed to be prorated over a maximum 5 years, so the $66M bonus will account for $13.2M of salary cap each of 2021-2025. So why the additional void year in 2026? It appears the contract contains language that will automatically restructure Dak's fully guaranteed $20M salary for 2022 into a signing bonus. So here's how that might work:

If Dak plays out the contract through 2024, then decides to test free agency in lei of signing an extension with Dallas, the Cowboys will take on an estimated $20.76M dead cap hit to see him walk away in the 2025 season.

You'll be hard pressed to find an NFL player who's ever had as much leverage as Dak Prescott did over the past few months. There are plenty of people out there (myself included) who feel this contract can be classifed as a better contract than what Patrick Mahomes signed with the Chiefs last year. While nobody will be crying for Mahomes as he surpasses the $200M earned mark somewhere down the road, Dak has ensured himself a life changing payday, while also retaining control of his destiny somewhere between the age of 31 and 32 years old, or the age that Matthew Stafford just left Detroit. This won't be the last we'll hear from Dak Prescott and contract negotiations, and with a reported $14 billion in new TV money right around the corner, the next version of this could be simply eye-popping.

A financial recap and comparison of Tim Duncan, Kobe Bryant, and Kevin Garnett who will be inducted as the 2020 Basketball Hall of Fame Class.

Criteria for a “SuperMax” Extensions

The criteria that must be met in order for a player to be eligible for a "SuperMax" extension and the details involved if a player signs this type of extension.

The deadline for NFL teams to decide on the 5th year option salaries for 2022 for all 2018 1st round selections is May 3rd. We'll track those decisions here.

A snapshot look at how much guaranteed cash each notable quarterback has on the contract currently.