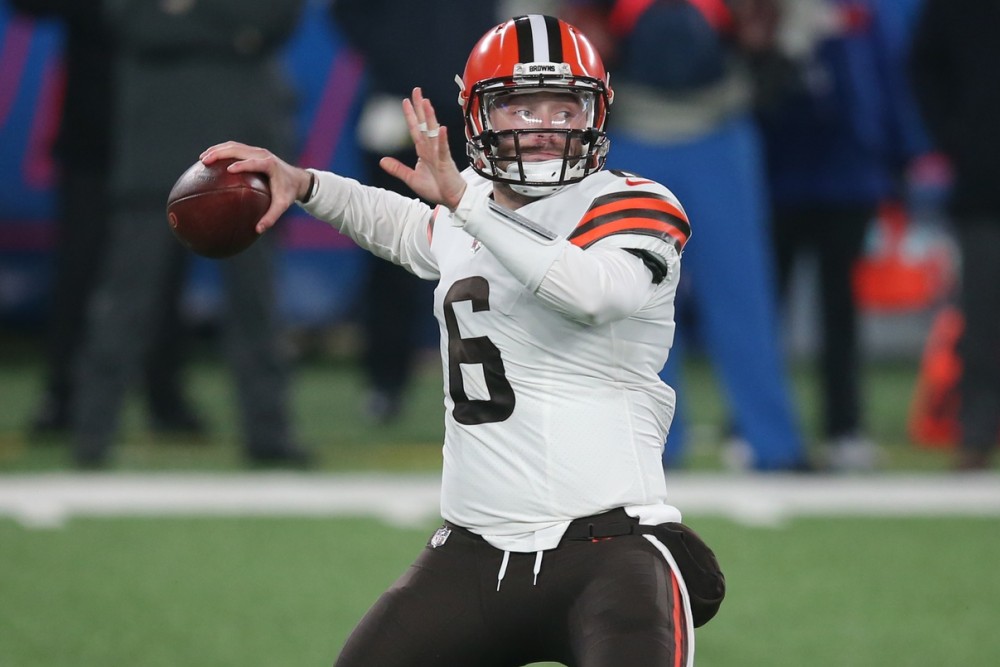 It’s no secret that Baker Mayfield & the Cleveland Browns don’t appear close to reaching a contract extension, but which side is holding up the process? The answer very well may be both.

The former #1 overall selection in 2018 posted a strong rookie campaign, but a forgettable year two in Cleveland, putting a huge monkey on his back heading into the 2020 season. He responded admirably, posting 26 TDs, 8 INTs, while completing 63% of his passes, despite a career low 3,560 yards. More importantly the 11-5 Browns found the postseason, & officially dug themselves out of regular season purgatory.

Not great, but also not exactly the whole story. It’s easy to use the law of averages here and claim that the full sample size for Baker is well below average. But 2018 was good, and 2020 was great. 2019 was so bad, that it’s stinking up the whole thought process. So which Baker Mayfield should the Browns be considering when preparing to discuss his long term status with the team? The correct answer should probably be: TBD.

The fact of the matter here is that the Browns have done an excellent job building up this roster around Baker, including a massive offensive line overhaul, an influx for defensive pass rushers, and this year, upgrades to their secondary. Cleveland has used all avenues possible to rebuild this team, and it’s shown both on the field, and within their financial breakdowns. At the time of this piece, the Browns carry the fourth most cap space in the league.So is Baker Mayfield’s recent success more a product of the players around him, or a result of him settling into the league, this team, and his role as a franchise QB? The correct answer should probably be: TBD.

This option is nearly $5M less than that of Josh Allen or Lamar Jackson, as Mayfield hasn’t been selected to a Pro Bowl (yes, that’s how much power that arbitrary game now has financially). So everything’s fine, right? Baker can make his $24M over the next two years while the Browns can get a more thorough look at what kind of quarterback he’s really settling into during that span.

Sure, but the answer to the often asked question, “Why are teams constantly paying their superstars as soon as possible rather than waiting until a contract expires?” is: They’re trying to grab value before other players at a similar position or situation further the market. This is especially true at the quarterback position, where Patrick Mahomes has already broken through the ceiling, and Allen/Jackson will soon surpass Dak Prescott & Deshaun Watson’s $40M+ mark, with $100M fully guaranteed extremely likely.

But is Baker Mayfield really in line for the same contract as Josh Allen or Lamar Jackson?

As it currently stands, no, but if Baker builds on his 2020 success both individually and in terms of winning (Browns currently hold the 7th best Super Bowl odds), any thoughts of a contract in the $35M per year range can be thrown out the window. If a realistic valuation for Baker Mayfield includes $70M guaranteed today (6th among active QBs), a successful 2021 campaign can increase that value to $95M+ (Dak Prescott’s current league high).

If the Browns believe the seasonal inconsistency isn’t a fluke, rather a trend, then the conversation likely changes completely. No longer should the Browns be concerned about a massive increase in what could be, because their internal thinking will never include that long-term offer. In my personal opinion, Baker Mayfield’s worst case scenario over the next 4 seasons is to fall into a Kirk Cousins’ lane. In this scenario, Baker plays out his rookie contract, earning another $24M for his efforts, after which Cleveland slaps a franchise tag on him in 2023 which could be in the $32M range based on cap projections. This gets Baker to $56M earned, offering Cleveland an out as needed. A second franchise tag for Mayfield then comes in at around $39M, which brings us to $95M, the exact amount referenced above currently attached to Dak Prescott as the most guaranteed money at signing in NFL history.

Will Baker and his camp like this route? Most likely not, but Dak Prescott proved that even the occurrence of injury during this pay-as-you-go process won’t stop an above average quarterback from earning his payday. The rookie contract + two franchise tag plan means high cap hits for those two back years, but the NFL should see an immense jump in league salary cap come 2023, giving the Browns breathing room to handle such a process. Should this play out as proposed, Baker Mayfield would see approximately $123M over his first 7 seasons, with a chance to further his career at age 29.

If the Browns would prefer to stick to a traditional extension, one could be negotiated as early as the middle of the upcoming season, as Browns beat Mary Kay Cabot has mentioned often. It’s possible Cleveland simply wants a taste of 2021 Baker to ensure the player they saw in 2020 is the real deal, after which a long-term contract negotiation could come into play.

Mayfield carries a $35.2M valuation in our system at the time of this piece, but as noted above, this will increase when Josh Allen and/or Lamar Jackson lock in a new deal. Our projection tool places a 4 year, $141M extension on the table, $70M fully guaranteed at signing. We’ll round things up for the most part when building out a mock contract extension here for Baker Mayfield. New Years: 4