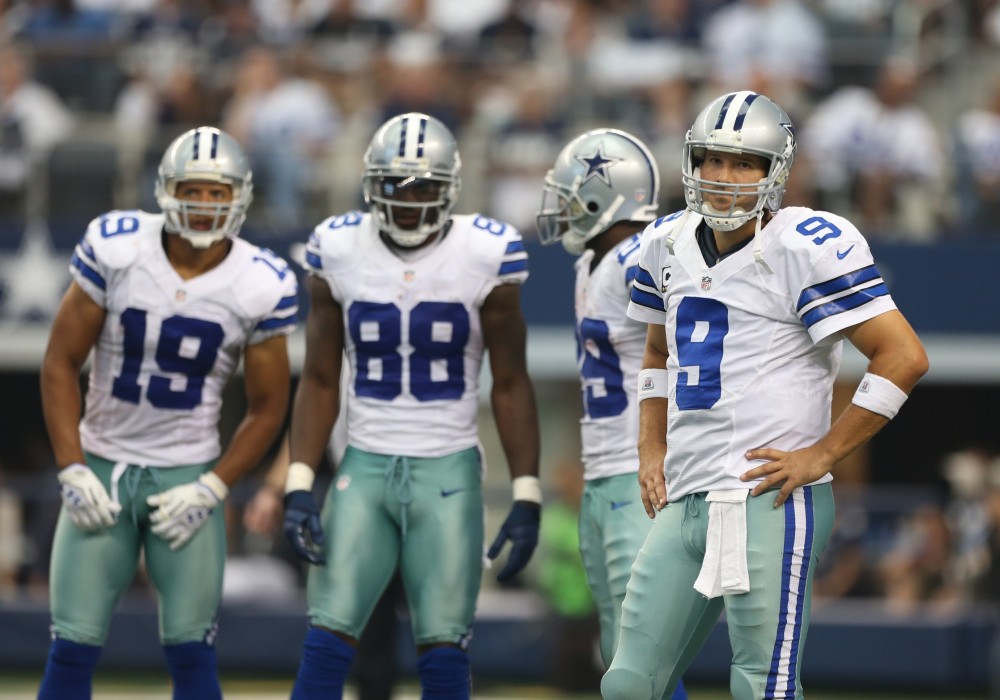 By: Michael GinnittiUPDATED: February 24, 2014
With the 2013 NFL season officially wrapped up, we'll take our first look at how each team ended up in terms of salary cap space (estimated as always), and project 2014 cap space as it currently stands. As the 2014 team salary cap has not yet been officially determined, we'll use the rumored $132 million to project 2014 figures for each team. The cap space represents projected rollover cap unused from 2013 plus the team's current 2014 Top 51 cap figures minus $130 million.

Larry Fitzgerald's contract restructure cleared $10 million from the Cardinals 2014 cap. The move brings the Cardinals projected space to $15.2 million, 18th in the NFL. Additional space should be created with the expected release of G Daryn Colledge.

The Falcons cleared $6.5 million in cap space with the release of cornerback Asante Samuel and linebacker Stephen Nicholas, and $1.37M more by letting Garrett Reynolds walk. The moves bring Atlanta up to $25.25 million in projected cap space heading into the free agency season.

The recent restructure of LB Terrell Suggs cleared $4.8 million in 2014, bringing the Ravens over $22 million in projected space. Re-signing TE Dennis Pitta appears to be the next logical financial step in Baltimore.

The Bills are in excellent shape this offseason, with money to burn and fewer holes than usual to fill. Safety Jairus Byrd once again becomes the top question mark this March, with the franchise tag yet again the Bills' last option. It's also a strong possibility that Veteran WR Stevie Johnson is moved this offseason. A move after June 1st would leave $2.825 million on the Bills 2014 cap (and $5.65M on their 2015 cap).

The Cleveland Browns at #3 may have the most favorable situation, with just 7 unrestricted free agents set to hit the market (2 notable in center Alex Mack and safety T.J. Ward). The padded cap space allows them room to not only shop the open market, but front-load some of their core talent set to expire in 2015 (Joe Haden, Jordan Cameron, etc) should they be sold on them long-term. The franchise tag may be in play for Cleveland.

It's been no secret that the Dallas Cowboys, for the 3rd straight year, are in terrible salary cap trouble. Our initial figures show them with more than $20 million over the 2014 cap already. Add in their 11 unrestricted free agents, two of which are major defensive contributers (DE Anthony Spencer, DT Jason Hatcher) and the road to cap safety is a long way for Dallas in the next few months. A likely release of WR Miles Austin (as a Post June 1st Designation) will clear a much needed $5.5 million in space.

The void of RB Knowshon Moreno and CB Dominique Rodgers-Cromartie opens up $6.31 million in cap space. They'll likely add another $10 million in space with the release of CB Champ Bailey, and possibly $3 million more by letting TE Jacob Tamme walk.

Recent departures of safety Louis Delmas, and Nate Burleson cleared more than $11M giving the Lions more than $7.7M in space. This despite Ndamukong Suh's $22.4 million figure for 2014 - the final year of his contract. The Lions are undoubtedly working to extend Suh long-term to heavily reduce this cap number.

While the Indiandapolis Colts sit #4 on this list currently, 7 of their 19 unrestricted free agents were starters in 2013, leaving them with plenty of holes to potentially fill. A projected $39.9 million in cap space shouldn't stop them from trimming their current roster, notably center Samson Satele who's release can clear $4 million.

Matt Cassel's decision to void his 2014 salary cleared $3.7 million from the Vikings cap, but leaves Christian Ponder ($3.23M cap) as the only quarterback on the roster.

The Giants are in OK shape as it currently stands, carrying a projected $18.3M in cap space. The release/retirement of G Chris Snee would add another $6.8M to that figure. It's also likely that S Antrel Rolle works out a restructured contract, adding years to lessen his $9.25 million cap figure for 2014. The Giants also hold the most unrestricted free agents of any 2014 team with 23.

The New York Jets can/should leap a few spots on this list by releasing backup quarterback Mark Sanchez. A move that will clear $8.3 million in 2014 cap space. Add onto that the inevitable release of WR Santonio Holmes (clears $8.25 million), and a likely restructure/extension for CB Antonio Cromartie, and the Jets are in good shape heading into the offseason.

Pittsburgh joins the Cowboys as the only teams currently over the projected 2014 salary cap. As a recent report suggests, veteran cap casualty cuts could (and should) be on the way to clear cap space.

The Niners cleared $755k in space by reducing WR Jonathan Baldwin's 2014 salary this week, but additionaly manuevering is expected. This could come with the release of CB Carlos Rogers, a move that can free up more than $5.1M. Running back LaMichael James also appears to be on the roster bubble for 2014.

Like the Steelers, the Seahawks should be looking to clear cap space this offseason by releasing or heavily restructuring some of their less efficient contracts. The released of Sidney Rice cleared $7.3M in space, and the pending release of Red Bryant will clear another $5.5M.

While the St. Louis Rams are expected to release multiple veteran contracts (Cortland Finnegan, Kendall Langford, Harvey Dahl, Scott Wells) this offseason to aid in their minimal space (around $4.3 million projected), it should also be noted that they hold the #2 and #13 picks in the upcoming NFL draft. If these selections are held, they'll account for fairly sizeable cap figures in 2014.

The Redskins cleared an additional $12.3 million this week with the voided contracts of LB Brian Orakpo, LB London Fletcher, S Brandon Meriweather, and WR Josh Morgan. The moves bring the Redskins to over $30 million in projected space, offset by 18 unrestricted free agents.