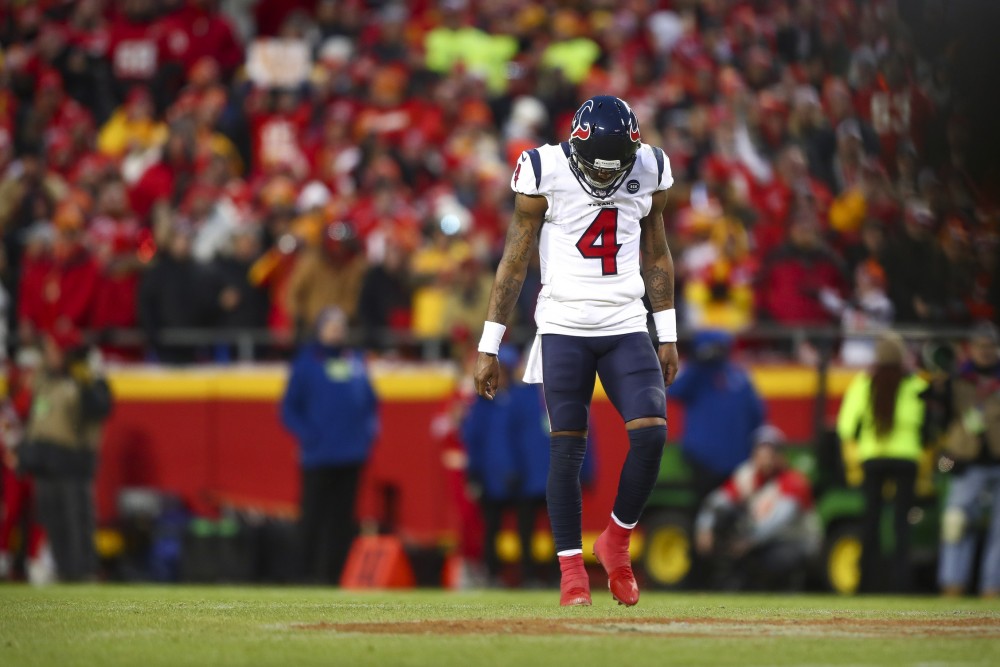 The November 2nd NFL trade deadline is just a month away, and plenty of names have already hit the rumor mill in this regard. We’ve compiled a list of quarterbacks, running backs, wide receivers, and tight ends that could be considered candidates for the upcoming trade deadline based on team performance, depth chart placement, or contract status.

For each, we’ve included the remaining 2021 cash salary at the November 2nd deadline (Deadline Salary), and the dead cap that would remain with their previous team, split over this and next season in some cases where relevant.

While the NFL sits on its hands with Watson’s legal situation, it doesn’t appear other teams will be doing so in terms of his future in the league. Trade rumors in both Miami and Philadelphia have picked up steam, and while Watson has a no trade clause, it’s hard to imagine him turning down a legitimate offer from either franchise.

Is it likely that the Niners move on from Garoppolo all together during this season? No. But if Trey Lance hits the ground running once his opportunity comes, QB-needy teams will be calling. It only takes one team to overpay.

Foles is certainly overpriced for his current QB3 status, and what’s more, $4M of his 2022 compensation is already fully guaranteed as well. Chicago likely eats a good portion of that to make any sort of deal, but teams like Washington, Pittsburgh, or the Jets could find value in bringing Foles onboard.

For now, the rumor mills have the Dolphins and Eagles pegged as favorites to acquire Deshaun Watson in the coming weeks. Assuming as such, it’s fair to assess that either Tua or Jalen would be compensation heading back to Houston, at least for the interim.

For now, the rumor mills have the Dolphins and Eagles pegged as favorites to acquire Deshaun Watson in the coming weeks. Assuming as such, it’s fair to assess that either Tua or Jalen would be compensation heading back to Houston, at least for the interim.

Mack’s return to Indy was supposed to work out better than this, but just 4 weeks in, both sides appear ready to move on. An under-minimum remaining salary should be attractive ro RB-needy teams such as SF, NE, or CAR.

Johnson heavily restructured his contract to stick around, but he’s seen just 35% of the snaps thus far. If Houston’s season continues to tumble, Johnson’s ability to catch out of the backfield should attract interest among contenders.

The Texans are little less invested in Ingram than Johnson financially, but he’s seem the lion’s share of rushing attempts thus far. It seems likely that they move on from one of these players before the deadline.

Cooks is just 28 years old, and is producing well for a not so great Houston offense. He’s been an impact trade to contenders before, and very well could be again in 2021.

Rumored to be on the block this past offseason, Harry hasn’t yet found his stride in the pros, and a preseason injury derailed his opportunity this far in 2021. Only half of his 2022 salary is guaranteed.

After scouring the free agent market, Smith-Schuster ran it back with Ben on a 1 year deal. A rib injury has limited his start, but it’s impossible to think he can’t help a contender down the stretch should the Steelers crash in burn over the next month. He’s also extremely afforable.

The Cardinals loaded up on veteran talent this offseason, forcing Isabella out of a WR role, into returner mode exclusively. Rondale Moore has already shown he’s capable of handling all of this and more in his short start, putting Isabella’s non-guaranteed future in question.

The 2020 #59 overall pick is certainly being slow-played in into a role with the Jets, to the point of where teams have started to inquire about his availability. This one seems unlikely, but we never rule the Jets out of anything. Mims has no future guarantees after 2021.

Should the Bears keep Robinson in order to slap a $21.4M 2nd franchise tag on him in 2022? Maybe. But Chicago needs an offensive line as much as they need weapons for their young QB, and adding relevant draft capital now will go a long way in helping that. Robinson is only on this list because of the value he holds

It was a huge surprise that Ertz broke camp as a member of the Eagles, and with Philly’s season turning downward quickly, it’ll be a surprise if he remains there past the deadline. He’s been targeted sparingly early on in 2021, and is set to become a UFA after the season.

The Buccaneers are probably looking to ADD as many weapons as possible rather than subtract, but Howard simply isn’t a factor in this offense. He is however a solid insurance policy for Gronkowski & Brate, both of whom have injury histories of late, so this is an unlikely move right now. Howard is finishing off the 5th year option from his rookie contract in 2021, set to become a UFA next spring.

Like Howard, Engram is finishing off the 5th year option on his rookie contract, set to become a free agent (or franchise tag candidate) after 2021. His 2020 campaign was a step forward, but injuries have slowed him building upon that this season thus far. The Giants might be one of the worst teams in football come deadline time, and selling off expiring parts then wouldn’t be crazy.