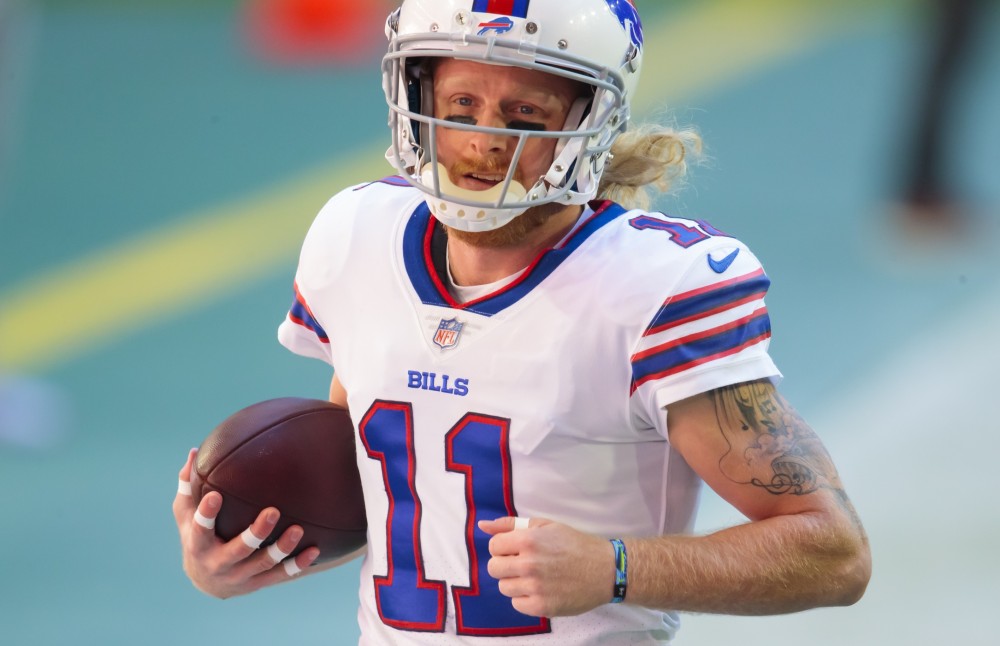 As we head into training camp week for a few NFL teams, we’ll identify one notable, mostly veteran, player from each organization who could be entering the end of July on their roster bubble.

2021 Cap Hit: $6M
Savings if Released: $3M
Hicks’ roster spot has been in jeopardy for two years now, and the Cardinals have now drafted his replacement in the starting lineup (Collins). Arizona will take on dead cap hits of $3M this and next year.

2021 Cap Hit: $987,500
Savings if Released: $687,500
Means has special teams value, so it’s not a shoe-in that he misses the cut. But the Falcons have more depth at linebacker than any other position. This is a sneaky “OK” roster heading toward Week 1.

2021 Cap Hit: $875,000
Savings if Released: $850k
Smith was a depth signing whose role was supplanted when the Ravens locked in Alejandro Villanueva away from Pittsburgh. He’s a camp cut/sign back after week 1 candidate to remove the vested vet guarantee.

2021 Cap Hit: $7.3M
Savings if Released: $5.3M
This one’s pure speculation. Beasley doesn’t seem happy, and the Bills do have a strong arsenal of potential WR2s now in the locker room, but it would still be a shocker move. It’s much more likely that someone falls off the defensive line in the coming weeks.

2021 Cap Hit: $1.7M
Savings if Released/Traded: $1.2M
Miller’s probably safe, but if one of the 6 WRs currently behind him on the depth chart outplay him in camp, the noise will start to get louder. There’s probably a late round draft pick to be acquired via trade still.

2021 Cap Hit: $1.12M
Savings if Released: $1.12M
The Bengals have a surplus of offensive linemen right now, but with Joe Burrow returning from serious injury, they’ll be hard-pressed to get even close to thin in that regard. Tupou’s a camp release, Week 2 return candidate.

2021 Cap Hit: $987,500
Savings if Released: $787,500
Parkey had a solid 2020, and appears to be in line to win the job again this summer. But the Browns brought in Chase McLaughlin to compete for the spot this camp, and anything can happen over the next few weeks. This is a very solid roster.

2021 Cap Hit: $1.2M
Savings if Release: $1.1M
Safety is likely the weakest position on this team, so seeing a veteran taking off the roster here doesn’t make too much sense. But the thinking here is that Dallas could make a move to acquire a potential starter in the coming weeks.

2021 Cap Hit: $1.2M
Savings if Released: $970k
Javonte Williams will be a name you’re about to hear a lot as fantasy football drafts rev up. With he, Melvin Gordon, and newly signed Mike Boone in the mix, Freeman could become the odd man out.

2021 Cap Hit: $987,500
Savings if Released: $850k
Allison currently projected to the 7th WR on this roster, which is right on the cut off line for making the Week 1 roster. Plenty of time to change this though.

2021 Cap Hit: $1.5M
Savings if Released: $1.2M
Funchess has been largely useless for the better part of 3 years now, so it was a little surprising to see Green Bay give him a $300k guarantee this winter. That might be a parting gift out of camp in a few weeks, as the Packers have plenty of WRs to choose from (just not 1st rounders).

2021 Cap Hit: $2.3M
Savings if Released: $1.8M
The Texans signed 7 players for every position this offseason, so plenty of players are bound to fall off in the coming weeks. Ingram might not have enough left in the tank for what will certainly be a young Houston squad. His $500,000 signing bonus remains the only dead cap until Week 1.

2021 Cap Hit: $980k
Savings if Released: $920k
The Colts roll into camp with Jonathan Taylor, Nyheim Hines, & Marlon Mack locked into roles. Wilkins has been durable and reliable through three years, and it might behoove Indy to keep him on this alone, especially with Mack’s health a question mark.

2021 Cap Hit: $920k
Savings if Released: $920k
The Jaguars have 6 tight ends rostered heading into camp and Tebow likely sits in one of the last two spots right now. While the story would be compelling, there are likely better places to keep a player. Gardner Minshew’s spot seems to be heating up as well.

2021 Cap Hit: $25.8M
Savings if Released: $19M*
Clark is facing serious legal trouble of which any sort of suspension from the league would void his remaining guaranteed base salary. With that said, his contract still contains $20.4M of dead cap stemming from bonus already paid out. It’s possible Kansas City could push to have some of this bonus repaid, which would lead to an eventual cap credit - but not in 2021. A release this summer would mean $6.8M of 2021 dead cap, $13.6M of 2022 dead cap (and a hole on the left edge of their D-Line)/

2021 Cap Hit: $3.5M
Savings if Released: $3.25M
Richard has done plenty to warrant a role on this squad, but the Raiders brought in Kenyan Drake on “serious playing time” money, and they’re going to use him accordingly. With Theo Riddick currently sitting 4th on this depth chart, there’s room for someone to go.

2021 Cap Hit: $1.5M
Savings if Released: $1M
Two new draft selections to the secondary have the Chargers with plenty of options heading into camp. This is the contract that stands out right now.

2021 Cap hit: $4.9M
Savings if Released: $3.75M
Hekker has been All-NFL for about a decade now, but he noticeably slipped in 2020, and the Rams have responded by adding two additional punters for a camp competition. Hekker has cap & cash against him right now, but his reputation may precede him in the end.

2021 Cap Hit: $1M
Savings if Released: $850k
Samia posted one of the worst advanced ratings in 2020, and the Vikings added experienced depth to compete for his backup job. But more is always better at the offensive line.

2021 Cap Hit: $2.75M
Savings if Traded: $1.4M
Harry’s contract is fully guaranteed through 2021, so it makes no financial sense to outright release him. But a trade for anything gets $1.4M of cap/cash off their books, and frees up a roster spot to be used elsewhere. That’s where this appears to be headed.

2021 Cap Hit: $4.1M
Savings if Released: $3.1M
Murray has been a worthy backup for the Saints since 2019, and this release probably doesn’t happen until after the 2021 season. But if some of the younger talent (Washington, Montgomery) prove they can handle the RB2 job, there’s a good chunk to be saved here.

2021 Cap Hit: $1.8M
Savings if Released: $838k
The Giants have three receivers, Ross, CJ Board, & Dante Pettis who are carrying a cap hit north of $1M, but have fragile footing for this roster. It’s just a guess here that Ross will be the odd man out.

2021 Cap Hit: $2.35M
Savings if Released: $2.1M
Yes, Herndon will enter camp as the TE1 for this Jets team, but 2020 went so poorly, that it stands to reason how long he remains there. Vets Ryan Griffin & Tyler Kroft now sit behind him on the depth chart, and it could very easily get to a point where both sides will request a change of scenery.

2021 Cap Hit: $1.56M
Savings if Released: $0
This isn’t happening, but I disliked the timing, cost, & fit of this signing so much that I still hope the contract is terminated before the season gets here. Especially now that Nick Mullens, a perfectly competent backup QB, sits on the Eagles’ depth chart.

2021 Cap Hit: $950k
Savings if Released: $850k
Berry’s been in the bottom of punter ratings for a few years now, but he’s probably still solid enough to keep at this price. Pittsburgh drafted some competition in the 7th round this year, so there’s an outside chance he’s pushed off the roster come September.

2021 Cap hit: $2.05M
Savings if Released: $920k
Wilson should signs of being a reliable option for SF, but the Niners took an RB in both the 3rd and 6th rounds this year who should factor heavily toward the top of this depth chart.

2021 Cap Hit: $987,500
Savings if Released: $987,500
It’s a hell of a story how many bodies the Bucs were able to return from last year, but that doesn’t necessarily mean they’re here to stay. McLendon likely sits as the third Nose Tackle on the roster, which doesn’t bode well for his role heading into camp.

2021 Cap Hit: $3.25M
Savings if Released: $2.7M
Kern has been with the Titans since 2009, an incredible tenure in today’s landscape. He’ll get some competition in camp from undrafted James Smith, and there’s a significant amount of cap/cash to be saved working against him.

2021 Cap Hit: $1.8M
Savings if Released: $1.5M
Everett has versatility on his side, playing snaps at both safety and cornerback in his career. Darryl Roberts is currently behind him on the depth chart, but also his $355,000 of his salary fully guarantees, something Everett doesn’t have going for him.