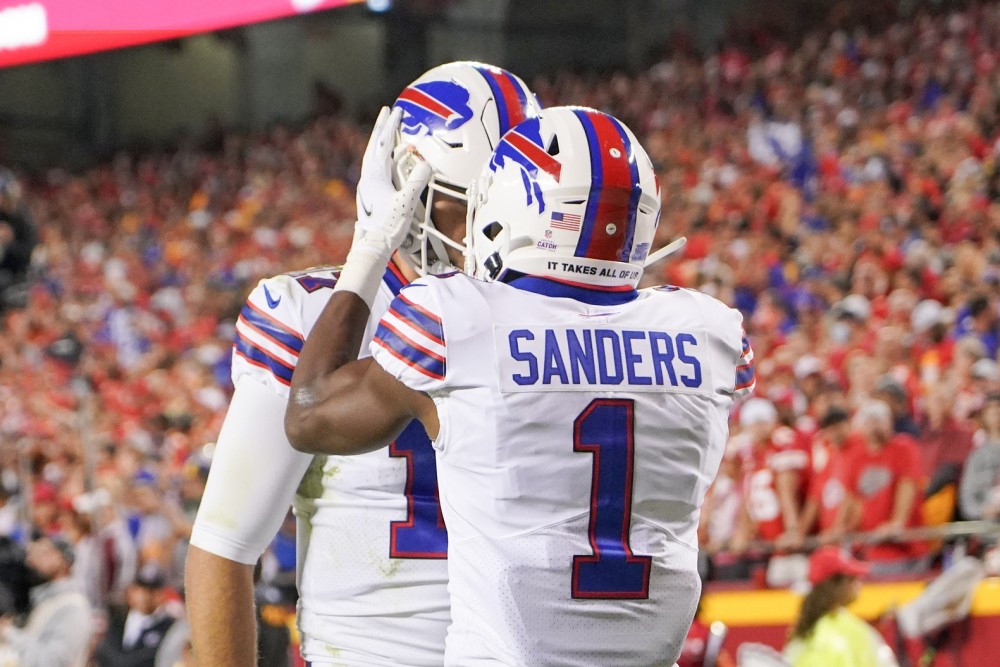 Now more than a quarter into the 2021 NFL regular season, we've identified a player from each team who's made an immediate impact since being newly added this offseason.

J.J. Watt, DE (Free Agent)
Watt is currently the #8 ranked interior defensive lineman according to PFF, and while his traditional stats don’t jump off the page (0 sacks, 10 tackles), it’s obvious he’s solidified the right side of Arizona’s line. He’s under contract through 2022 at $13.5M, with $5.5M of that already fully guaranteed.

Cordarrelle Patterson, RB (Free Agent)
Patterson was signed to a 1 year, $3M contrat a month into free agent, after a year in Chicago where he averaged less than 4 yards per carry. He’s now the 2nd ranked RB in the league according to PFF, with 5 total TDs through the first 5 weeks.

Sammy Watkins, WR (Free Agent)
Watkins isn’t putting together All-Pro production by any means, but he’s doing enough on the field to give Lamar Jackson a valuable option, while at the same time freeing up time and space for Marquise Brown to further establish himself. His 1 year $5M signing this offseason holds plenty of value for a surging Baltimore squad.

Emmanuel Sanders, WR (Free Agent)
The Bills didn’t change much about their 2020 roster, but upgrading the WR2 position was a need, and Emmanuel Sanders has fit the bill and then some. Buffalo signed Sanders to a 1 year, $6M contract, but if his production continues, a mid-season extension seems very likely.

Sam Darnold, QB (Trade)
While the interceptions are still there, Darnold is on a career pace in every other statistical category to start the 2021 season - by a lot. Most importantly, he’s winning ball games for the first time in his NFL career. Carolina has already exercised an $18.8M option for 2022, but there will be some extension talk this offseason (unless Deshaun Watson or Aaron Rodgers comes to town).

Jason Peters, OT (Free Agent)
I know the knock on this team is the lack of an offensive line, but both Peters and RT Elijah Wilkinson have had a strong few weeks. Chicago had to pull Jason Peters out of retirement as a last ditch effort to salvage their O-Line, and the near 40-year-old hasn’t disappointed. He’s on a 1 year $1.75M contract.

Ja’Marr Chase, WR (#5 overall pick)
The Chase-Burrow connection didn’t take long to come together, and the Bengals now have 4 legitimate offensive weapons to boot. Chase doesn’t even become extension eligible until after 2023, so there’s a ton of value to be had here.

Jeremiah Owusu-Koramoah, LB (#52 overall pick)
His versatility was actually a negative for some teams looking to fill a very specific role on their edge, but the Browns have let this guy cook for 5 weeks, and he’s rewarded them handsomely. He’s a legit DROY candidate early on, and brings incredible financial value for at least 3 years.

Micah Parsons, LB (#12 overall pick)
“Linebacker U” has given us another good one, as the former Penn State star has become the versatile, intelligent piece to the Cowboys defense they’ve been seeking for years. He’s in year 1 of a 4 year, $17M contract.

Teddy Bridgewater, QB (Trade)
Bridgewater is a Top 15 QB according to PFF, and has passed the eye test for much of the early season as well. At under $4.5M for the 2021 season, Teddy is giving this Denver team plenty of value thus far.

Austin Seibert, K (Waiver Claim)
It’s not a good sign that the most positive addition to the Lions might be a kicker who’s only played in 3 games thus far. To be honest, the roster as a whole has been built to fail, but the run game and special teams have been adequate thus far.

Randall Cobb, WR (Trade)
Of course he is. Aaron Rodgers clearly knew what he was talking about when he demanded a reunion with Cobb, who has solidified the slot WR position almost immediately since coming back on board. Cobb is the #12 rated WR in the league according to PFF right now, and carries an $8.25M salary through 2022 ($0 guaranteed).

Maliek Collins, DT (Free Agent)
Not a lot of positives to report here, but Collins has been a Top 30 interior defender thus far in 2021, which represents plenty of value on a 1 year, $5M contract. Tyrod Taylor’s early stint with the team looked extremely promising as well.

Matt Pryor, OT (Trade)
Pryor’s a swing/depth tackle on a more regular basis, but he’s played well in the absence of Braden Smith at starting RT of late. He’s on an expiring contract and could be playing himself into a nice raise as every team in football stocks up on depth offensive lineman annually.

Marvin Jones, WR (Free Agent)
The Jag’s offense has sputtered for the most part to date, but Marvin Jones has consistently shown he’s still as valuable as a 2nd or 3rd pass catching option as ever. The 31-year-old is signed at $5.5M through 2022, $2.5M of which is fully guaranteed.

Creed Humphrey, C (#63 overall pick)
The Chiefs are rolling with 5 brand new offensive lineman right now, and it’s been an improvement across the board. Their 2nd round pick is already the highest graded center in the game according to PFF, and the line as a whole averages a PFF grade north of 70.

Yannick Ngakoue, DE (Free Agent)
Ngakoue signed a 2 year, $26M free agent contract in LV, $8M of which is fully guaranteed in 2022 already. He and Maxx Crosby have been outstanding edge defenders to start the 2021 campaign.

The Offensive Line
No need to separate how good Matt Fieler (free agent, PIT), Rashawn Slater (#13 overall), & Corey Linsley (free agent, GB) have been to start 2021. Feiler is under contract through 2023, Slater & Linsley through 2025.

Matthew Stafford, QB (Trade)
Stafford and the Rams’ offense has come back down to earth a bit since coming out of the shoot firing on all cylinders, but it’s still clear as day that he alone is a significant upgrade to this team’s contention chances. Stafford has 1 year, $23M left on his deal, so a big-time extension is highly likely over the coming months.

Jason McCourty, CB (Free Agent)
The Dolphins don’t have a lot of positives to point at thus far, so we’ll look to find value where it exists on this roster. McCourty has been consistent, especially in coverage, playing on a veteran minimum contract this season.

Dalvin Tomlinson, DT (Free Agent)
The Vikings locked in Tomlinson at 2 years, $21M, with $16M of that paid out this season. He factors into a Minnesota D-Line that has been well above average (76.5 rating) through the first 5 weeks. He’s an extension candidate this offseason.

Mac Jones, QB (#15 overall pick)
He’s got a long way to go, and might never have the production that stacks up with a Herbet or even Zach Wilson, but the decision making and moxy appear to be baked in out of the gate. Jones is fully guaranteed through 2024.

Pete Werner, LB (#60 overall pick)
Werner has progressed from an injured player in August, to a starter in October. He's got all the tools to be a fixure on the Saints' edge for the next few years at rookie contract value.

Kadarius Toney, WR (#20 overall pick)
It took Toney a few weeks to find his footing in this offense, but he appears to be the real deal. The Giants have a surplus of WRs rostered (injuries aside), but Toney might finish 2021 as the best of them.

Alijah Vera-Tucker, OG (#14 overall)
To be honest, the entire left side of the Jets O-Line has shown significant improvement, even without Mekhi Becton in the fold. Vera-Tucker is the perfect boring, yet crucially required high draft pick for a team with a young QB.

Kenneth Gainwell, RB (#150 overall pick)
Gainwell isn’t going to load up the stat sheets, but he’s shown to be a viable #2 option both as a 3 down runner and pass catcher. His 5th-round rookie contract represents extensive value going forward.

Melvin Ingram, EDGE (Free Agent)
Ingram didn’t sign until the middle of July, at 1 year, $4M. He’s rewarded Pittsburgh with 70% of their snaps, and above average production across the board.

Elijah Mitchell, RB (#194 overall pick)
Mitchell’s only seen 120 snaps, but he’s shown to be a more complete, and thus far productive, back than 3rd rounder Trey Sermon. There’s a chance the Niners have found a strong late round depth piece here.

Joe Tryon-Shoyinka, Edge (#32 overall pick)
Tryon’s getting a masterclass education in his first season on the Buc’s pass rush unit, operating in about 40% of the snaps in rotation with a few All-Pro vets. He’s showing potential to be able to take the reins sooner rather than later.

Julio Jones, WR (Trade)
Despite battling another injury, the 150 snaps the Titans have gotten from Jones have shown he’s still worth the price of admission. If they can get a stretch of games with both he and A.J. Brown at full strength, this offense may round back into form quickly. Jones has 2 years, $23M left through 2023 ($0 guaranteed).

Charles Leno, OT (Free Agent)
Leno was signed with words like “swing” and “depth” in mind, but he’s taken over the left tackle role, and performed well through 5 weeks. On a 1 year, $4M deal, Leno has a chance to cash in next March with a full season at this form.