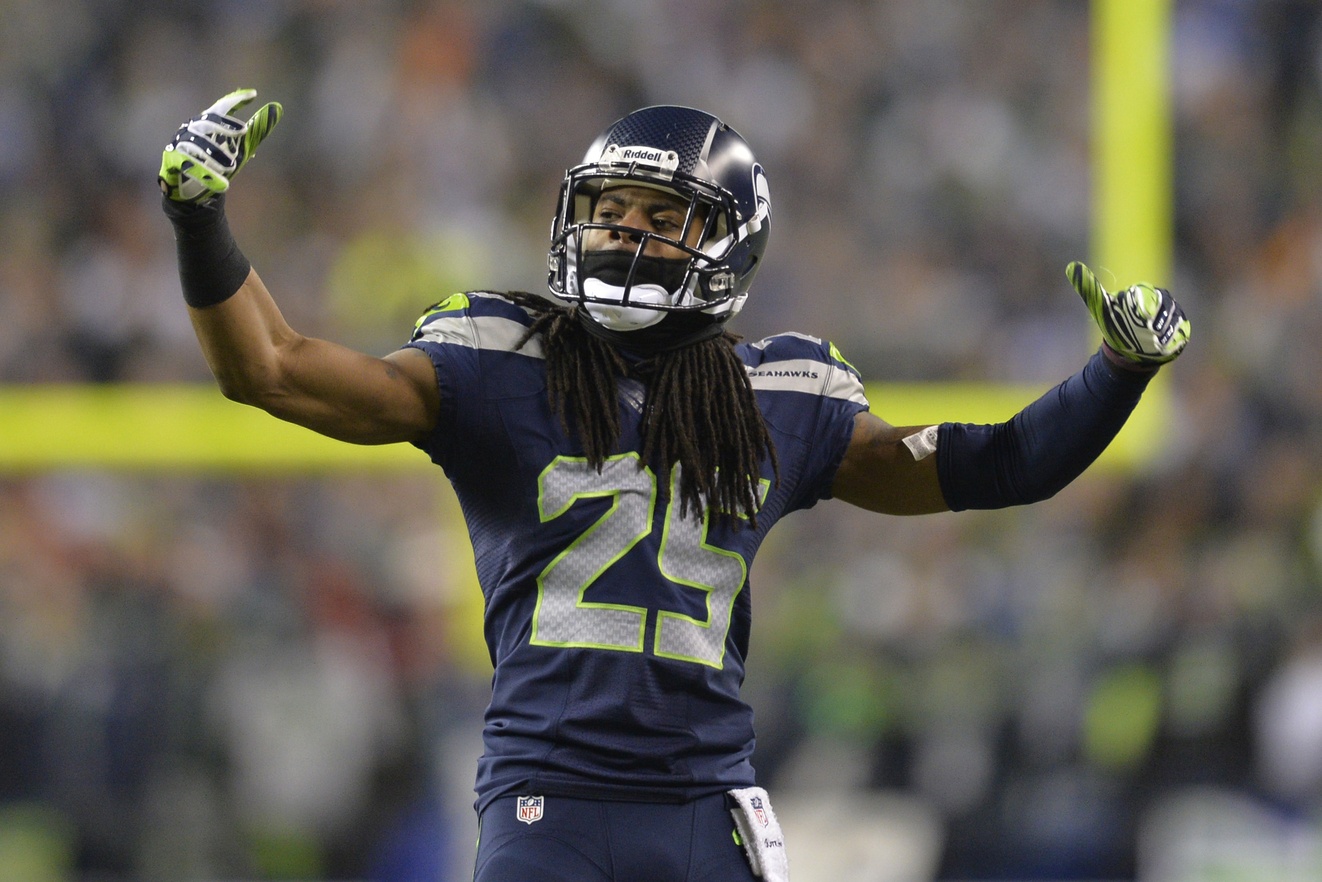 The "best cornerback in the game" has certainly garnered plenty of attention in the young 2014, but he's also walked the talk through 3 NFL seasons in Seattle. Of course we're talking about Richard Sherman, the latest entry to our list of contract extensions.

The 2011 5th round draft pick out of Stanford signed a base rookie contract with the Seahawks, including a $182,424 signing bonus. He's set to earn $645,000 in 2014 cash, the final year of his contract, but many believe Seattle will expedite an extension with their talented cornerback.

Other Options
The projected franchise tag value for cornerbacks in 2014 is $11.25M, a figure that will rise slightly in 2015 when Sherman would become taggable. It's fairly certain that our forecast below results in an average annual salary north of $12M, meaning the Seahawks could potentially stall/save by allowing Sherman to play out his contract with the notion of franchise tagging him in 2015. This most certainly will not be the route Sherman and his camp will prefer (i.e. Jairus Byrd / Buffalo Bills).

We'll evaluate Sherman against the top cornerbacks in football in order to provide a mathematical forecast for what an extension in Seattle might look like.

Comparable Cornerbacks
To generate a prediction the Spotrac team determined that the following cornerbacks were viable targets to use in comparing with Sherman. The key was to locate players with similar numbers, who signed a contract around the current age (almost 26). Here's a look at the contracts signed by each. To determine a more likely starting point for our numbers, we'll perform a linear regression of each contract breakdown listed below.
Sherman will turn 26 at the end of March - a likely starting point for negotiations, and a relatively young age in terms of cornerbacks signing big contracts/. We'll adjust the above contracts down to reflect each as if it were signed at the age of 26 to provide a better scope for our base prediction.

View the list of Top Average Paid Cornerbacks in the NFL

It's clear from our breakdowns here that Sherman is used more-so as a coverage/shutdown corner (INT/Caught %), and less-so as a run stopper (tackles). In this manner this evaluation is very similar to that of Darrelle Revis', which turned into the largest contract in NFL cornerback history. Sherman stacks up in all of our primary categories, averaging 8 INTs and less than 50% of balls thrown his way caught over the past 2 seasons in Seattle.

We'll factor both his Median and Average prime numbers into our base terms to provide a low and high bar for our forecast.

Guaranteed Money
Sherman has played in all 32 regular season games since entering the league in 2011. He won the starting role 6 games into his rookie season and hasn't looked back. missed a game prior to his foot injury, so it's difficult to place too much concern on the games missed. We'll eliminate the prime percentage in lei of this, and provide a straight average in terms of guaranteed dollars for this forecast.
Results

Length of the Contract
It goes without saying that Richard Sherman deserves 6 new years on his contract. At the age of 25, nearly 26, and with exceptional durability through 3 NFL seasons, Sherman holds maximum leverage for length of contract and guaranteed money.

Value of the Contract
Sherman is the second-coming of Darrelle Revis in terms of statistical production, shut-down ability, and on-the-field respect. Our initial base terms brought forth an average annual salary just under $12 million ($11,990,642), a figure that would make him the second highest average paid cornerback in football, but more than $4M per year less than Revis. We'll take a unique approach here, and process two separate values, providing a low and high bar for Sherman, possibly in terms of a hometown discount to remain with the Seahawks.

We'll split the difference to offer the best-value forecast for Sherman's next contract.
Spotrac's Prediction: 6 years, $92,714,000