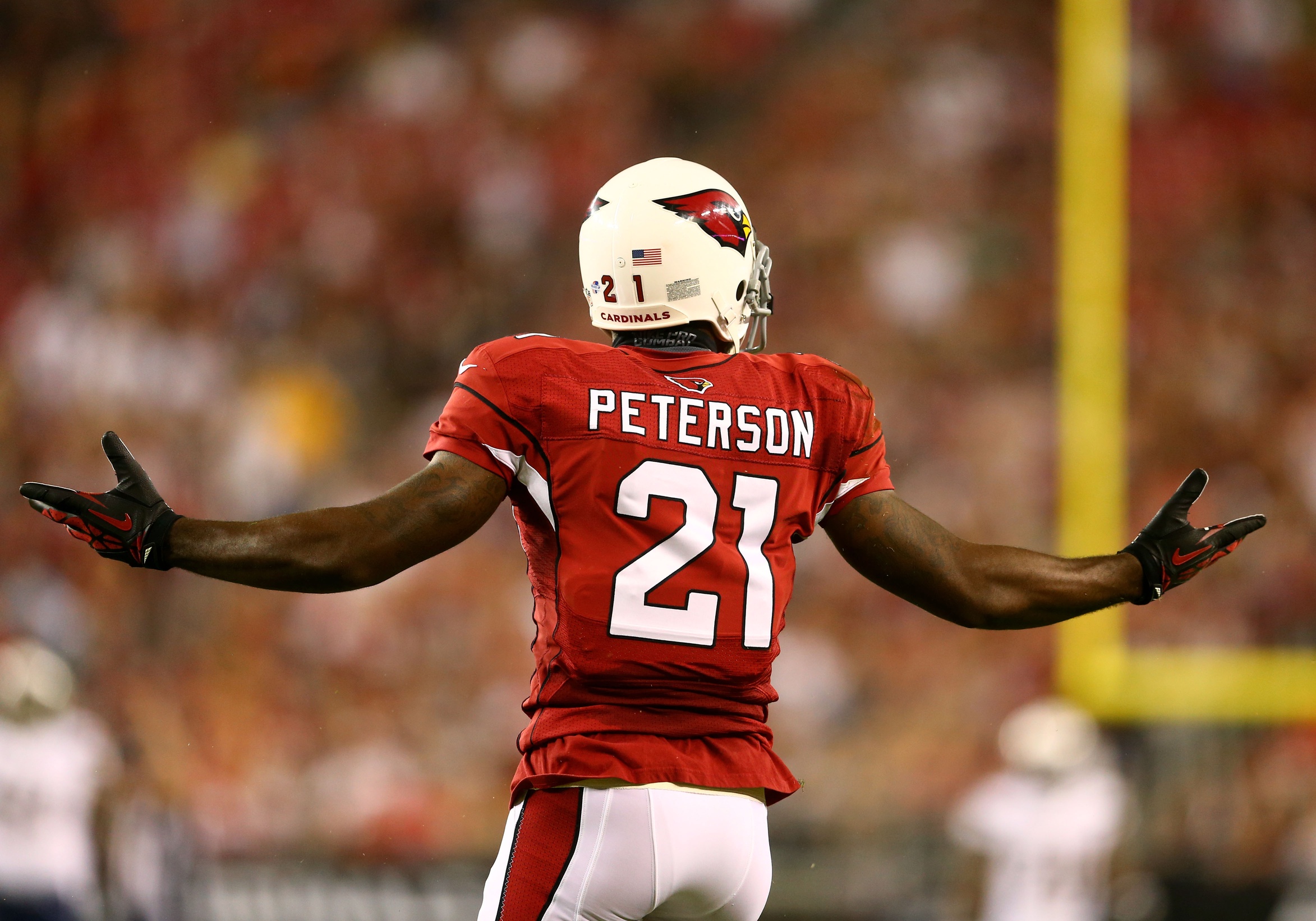 The Arizona Cardinals have boasted a tough and productive defense for the better part of the last decade, combining young speed with savvy, hard-hitting veterans. Now, with long-term extensions being handed out to key members of NFL secondaries around him, one of the most important young members of the Cardinals is getting his two-cents in as he looks for his next big pay day. CB Patrick Peterson, Arizona's first round draft selection (#5 overall) in 2011 is set to enter year four of his 4 year, $18.429 million rookie contract - and has his eyes set on Richard Sherman dollars. The Cardinals exercised a fifth-year option on Peterson, giving him a calculated $10.081 million salary for the 2015 season. At just 23 (24 in July), Peterson is markedly younger than most defensive players in-line for a big pay day, which could work to both sides benefit.

But with large contracts to free agents Aqib Talib (DEN), and Alterraun Verner (TB), and even larger extensions to Earl Thomas & Richard Sherman in Seattle, Peterson has become outspoken about his desire to cash in with the Cardinals in the coming months. Upon congratulating Sherman on his recent 4 year $57.4 million extension with the Seahawks, Peterson noted:

"I think cornerbacks are definitely worth the dollars that they get because now this league is a passing league," he said. "You need that shutdown corner to lock down one side of the field, or like myself, go out there the entire field."

We'll evaluate the recent productivity of Peterson against some of his top colleagues to determine his value, and provide a mathematical forecast for what an extension in Arizona might/should look like.

To generate a prediction the Spotrac team determined that the following cornerbacks were viable targets to use in comparing with Peterson. The key was to locate players with similar numbers, who signed a contract around the current age (almost 24). Here's a look at the contracts signed by each. To determine a more likely starting point for our numbers, we'll perform a linear regression of each contract breakdown listed below.

Peterson will turn 24 in early July, a likely starting point for negotiations, and a relatively young age in terms of cornerbacks signing big contracts. We'll adjust the above contracts down to reflect each as if it were signed at the age of 24 to provide a better scope for our base prediction.

Related: View the list of Top Average Paid Cornerbacks in the NFL

Now let's analyze these players statistically over their careers by showing the averages for Games/Season, Intercetpions/Season, Tackles/Season, and Completion % Against/Season. Then, to assess how well the player was performing prior to signing their respective contract, we'll show the averages of these statistics two years prior to their signing date. This will give us a "Prime Percentage" for each player, providing us with a snapshot for how well that player was performing when the contract was signed in relation to his overall career.

Somewhat surprisingly, at the end of the day the numbers pretty much break even. He's playing more games and intercepting more passes than the average top cornerback, but he's slightly lower in terms of tackles and % of balls caught against him over the past two seasons in Arizona. We'll factor both his Median and Average prime numbers into our base terms to provide a low and high bar for our forecast.

Guaranteed dollars have become increasingly MASSIVE for cornerbacks over the past few seasons - evident of Sherman, who was guaranteed 70% of his contract. Peterson has shown remarkable durability - even in addition to having played both wide receiver and a focal point in the return game for the Cardinals over the past three seasons. In lei of this, we'll eliminate the prime percentage in lei of this, and provide a straight average in terms of guaranteed dollars for this forecast.

Length of the Contract
The trend with players in the secondary (and wide receivers for that matter) is to extend a player up to the magic "29" age, giving him a fair shot at another big contract as he enters his 30. With this in mind, we'll add a year to our figures - offering a 5 year extension for Peterson.

Value of the Contract
Peterson has certainly proved his on-field value, producing in all three elements of the game (Offense, Defense, Special Teams). But in terms of "cornerback production" he's simply parallel with the top players of his position. His prime margins indicate no calculable increase is necessary to our base numbers. This being said, it's not realistic to assume that a player as versatile and valuable to his team as Peterson will simply get the "going rate" as our calcalations have dictated here. What we've shown in this forecast is that in terms of a "shut down corner" alone, Peterson isn't close to worth the $14 million per year that Richard Sherman was awarded (a figure that ended up less than our previous forecast for him).

Peterson has outlying factors in his favor heading into next season:
1) leverage per his versatility, and durability
2) another expected jump in total team salary cap
3) a realistic possibility that Larry Fitzgerald is moved in 2015- freeing up even more room.
4) Richard Sherman's $14 million benchmark.

All things considered, we'll stick to the straight mathematics (as always) to project Peterson's value in terms of comparitive production as a cornerback in the NFL:

The Largest Contract for Each NFL Team