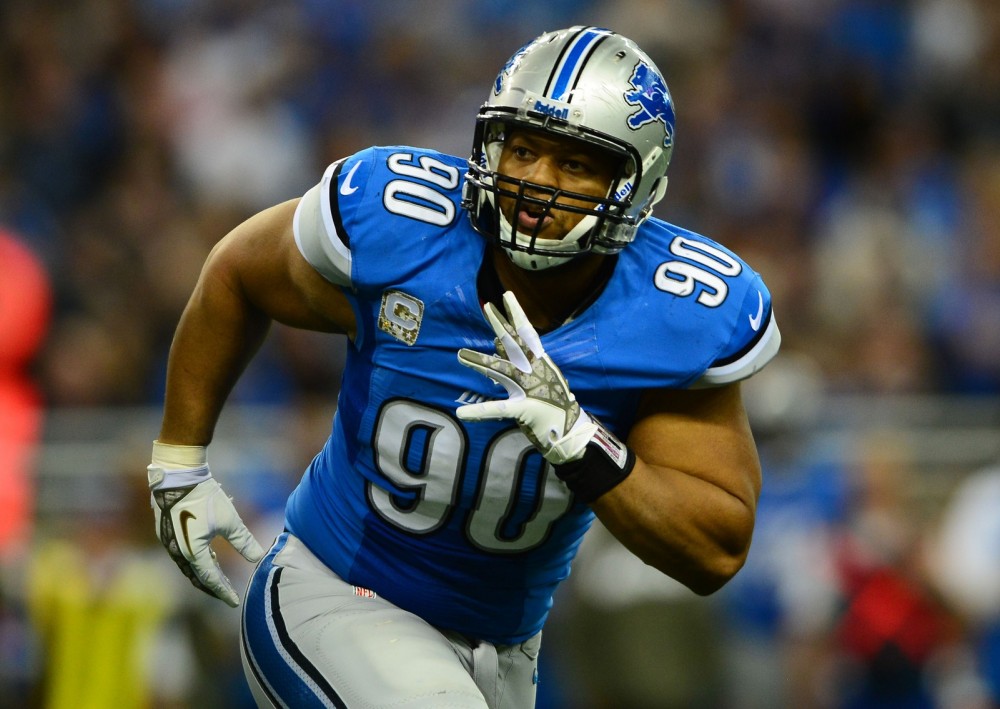 By: Michael GinnittiPosted: June 18, 2014
The Detroit Lions have been playing with fire over the past few seasons, using contract restructures to nearly all of their top contracts to push cap dollars out of the current year, and into years to come. But every bandaid loses it's adhesiveness at some point, and the current financial situation for Ndamukong Suh is living proof. Suh enters the 2014 season with the highest cap figure in all of football at $22,412,500 - nearly 17% of the Lions adjusted 2014 salary cap. It's also $6.4 million more than any other defensive tackle's cap figure for the upcoming season.

Keep In Mind
Our calculations here are done to determine "new money" involved in extensions. Suh's current contract also contains $19,475,000 in dead cap dollars as of now, combining two years in unallocated option bonus pro-ration and two years in unallocated restructure bonus dollars. This $19.475M carries through into the new contract, just as the $20.82M did for Matthew Stafford last year.

We'll compare Suh's current production against other defensive tackles in the league, to produce a viable value forecast for his forthcoming contract.

We've located four defensive tackles of similar age and production who signed contracts in recent years. To determine a more likely starting point for our numbers, we'll perform a linear regression of each contract breakdown listed below.

Because Suh (27) is young than Wilfork/Williams and older than Atkins at the time of their signings, we'll adjust the above contracts up/down to his age by adding/subtracting to their overall years to make each variable player 27 years old. Once a linear regression is performed on these new numbers we're given the following terms to begin with:

Now let's analyze these players statistically in the year prior to signing their second contract by showing Games Played, Sacks, Tackles, Solo Stops, and QB Hurries.

Suh matches up extremely well against our variable linemen, showing only a slight decrease in production in terms of the running game (tackles & solo stops). The Lions have utilized Suh much more as a pass rusher than a run stopper, and he hasn't disappointed in this regard. His job is to get to the QB, and as is evident with his highly inflated QB Hurries number - he doesn't disappoint. We'll factor in both the Median and Average Prime Percetanges to our base contract figures below.

Suh continues to be durable despite the grueling position he plays at day in and out. Genereally speaking, he's more likely to miss a game due to suspension than he is an injury based on his past experiences. His violent after-the-whistle antics have been an issues multiple times over his 4 seasons in Detroit, but we aren't going to let those play a factor to the amount of dollars guaranteed Suh should mathematically be accounted for.

Length of the Contract
Our base figures average out to a 4.5 year contract for this forecast. In light of Suh's age (27) and the recent contract signed by Geno Atkins with the Bengals (5 years), we'll round up to a 5 year extension for Suh.

Value of the Contract
It's fairly evident that in terms of the pass rush, Suh is well ahead of the previously signed class in terms of production. The X-Factor of course lies in Houston, where J.J. Watt is putting up all-world numbers across the board. In a recent forecast, Watt averaged out to a $23.7M per year contract. But as a 1st round pick in 2011, the Texans were able to utilize the 5th-Year option on him, keeping his salary/cap at bay for another year. Generally speaking it would be smart for Suh to wait for Watt's next contract to come forward before addressing his own, as the market is sure to explode at that point. But the Lions simply can't wait. Suh's $22.4M cap figure for 2014 is already making life difficult in Detroit, not to mention it's theoretically the final year of his contract. Suh has production, durability, and time on his side entering the negotiation room, and all signs point to a big payday in the near future.


Don't Forget
Our calculations here are done to determine "new money" involved in extensions. Suh's current contract also contains $19,475,000 in dead cap dollars as of now, combining two years in unallocated option bonus pro-ration and two years in unallocated restructure bonus dollars. This $19.475M carries through into the new contract, just as the $20.82M did for Matthew Stafford last year.

We'll split the two values to provide our calculated forecast for Ndamukong Suh's next contract in Detroit: