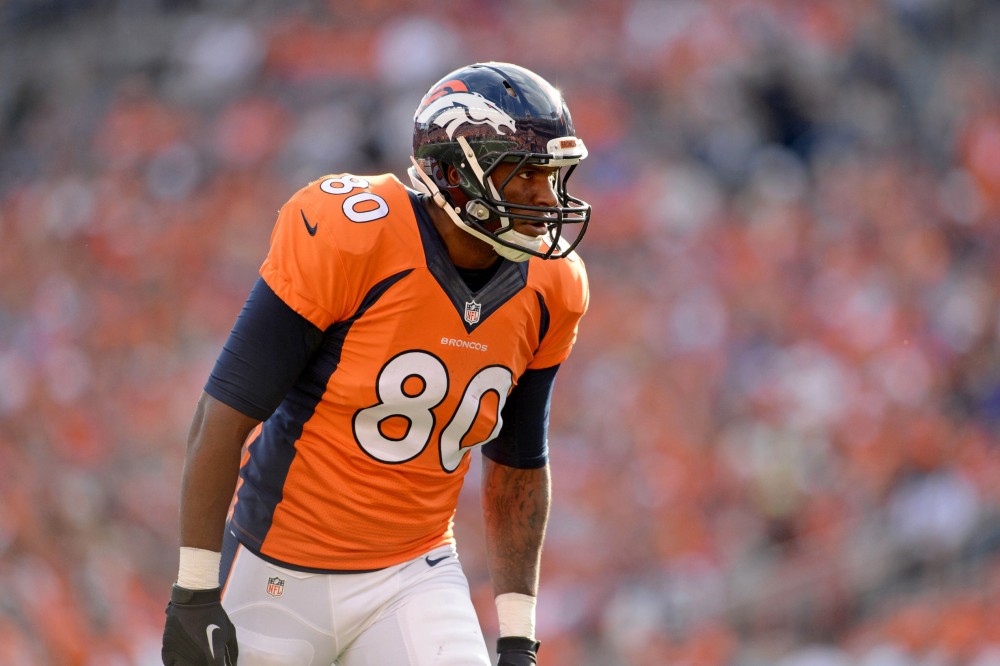 Many wondered if the breakout performance from Julius Thomas in 2013 was somewhat of a fluke. He's all but squashed those concerns through 6 2014 games, producing at an even higher level and scoring at an even faster rate. Thomas is both productive, and reliable - the perfect mix for an offense run by Peyton Manning. While many contribute Thomas' numbers to Peyton Manning, he's still putting himself in a position succeed. We've analyzed Julius Thomas' production from 2013 and projected out his current 2014 numbers to assess his current value heading toward the expiration of his extremely low valued rookie contract.

Comparable Tight Ends
To determine a more likely starting point for our numbers, we'll perform a linear regression of each contract breakdown listed below.

Thomas is only 26 years old, a center point for our variable tight ends. We'll adjust the above contracts up/down to his age by adding/subtracting to the overall years to make each variable player 26 years old. Once a linear regression is performed on these new numbers we're given the following terms to begin with:

Statistical Analyzations, Prime Percentage
Now let's analyze these players statistically in the year prior to signing their most recent contract by comparing Games Played, Receptions/Game, Receiving Yards/Year, Receiving Yards/Game, and Receiving TDs between our variables and Thomas.

No surprise, by Thomas is scoring at an unbelievable pace through 2013 and half of 2014. While it's unlikely he keeps this pace up, as long as Peyton Manning is his quarterback, Thomas is THE redzone target. He's catching 80% of his targets this year, at an average of 10 yards a reception. His 9 touchdowns are more than any tight end OR wide receiver in the league this year. We'll factor in both the Average and Median percentages to show a range projection below.

Length of the Contract
At 26 years old, Thomas is setup for a standard 5 year contract in 2015. This will allow for any initial bonus money to pro-rate over the maximum amount of years.

Value of the Contract
The base value of our analysis brought forth an annual salary of $8.3 million, a figure that ranks 3rd among active tight ends. When adding in prime percentages, the contract increases slightly, leaving our projection to be:

Final Thoughts
Has Julius Thomas done enough to warrant becoming the 2nd highest paid tight end in the game? It's certainly debatable, as the numbers clearly exist on paper. Many believe a world without Manning decreases Thomas' value immensely, to which we respond - who doesn't that apply to? What's become crystal clear, is that Thomas has become a must target 3rd and short/red zone player, a priceless weapon for any quarterback with professional accuracy. He'll never be the dynamic athletes that Jimmy Graham and Vernon Davis are (were), but he finds a way to create space, has elite hands, and makes people miss with the ball. He'll benefit both productively and financially because of his time spent in a Peyton Manning offense, even if he signs elsewhere in 2015.