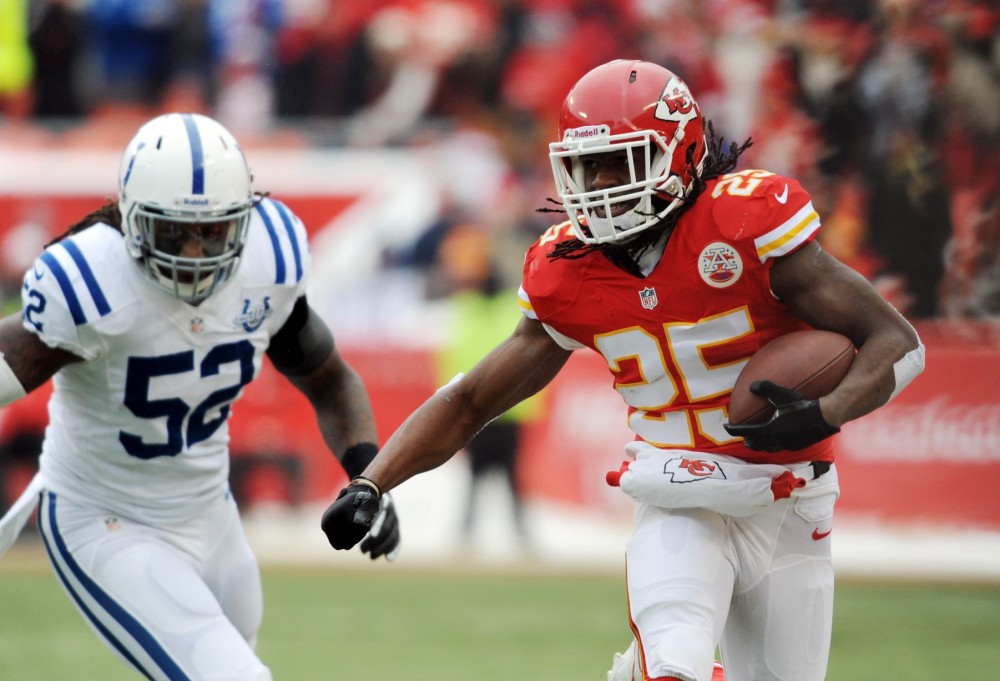 As the Kansas City Chiefs prepare to break ground on their 2014 training camp, one player who reportedly won't be appearing is star running back Jamaal Charles, who is using the time to leverage a restructured extension.

Charles has two years remaining on his current deal with the Chiefs, including $9.9 million in cash to be earned (although $500,000 of that may be lost per his training camp holdout). His $4.7M annual average salary ranks 13th among active running backs, so it seems within reason that a new deal makes sense for both parties.

At 27 years old, the time to extend Charles is now - as the 30 year old mark has become a threshold for running backs and strong paydays. We'll run Charles through our projection formula, now utilizing statistics from the 2012 & 2013 seasons, to predict what the Chiefs would be looking at in terms of a value-based extension as it currently stands.

Comparable Running Backs
Charles won't turn 28 until the end of the year, so we'll evaluate him at an age of 27 - a prime age for running back extensions. We've selected variables that have similar skillsets to Charles: i.e. the ability to both run and catch within their offensive framework. To determine a more likely starting point for our numbers, we'll perform a linear regression of each contract breakdown listed below.

We'll adjust the above contracts up/down to his age by adding to the overall years to make each variable player 27 years old. Once a linear regression is performed on these new numbers we're given the following terms to begin with:

Charles certainly belongs in conversation with our variable running backs statistically, especially in terms of durability and yards rushed. He scores a bit less and fumbles a bit more than our average elite back - but for all intents and purposes he stacks up nicely. We'll factor our average and median prime percentages below.

While Charles may be targeted a bit less than our average variable running back out of the backfield, his numbers still nearly even out . His 30 yards per game and 4 toucdowns per season make him a viable option in the passing game. We'll add these figures to our base financial numbers below.

Length of the Contract
Our variable running back contracts averaged out to over 5 years, and with 2 years remaining on his current deal in Kansas City, we'll assume this to be a 3 year extension. This brings Charles to the age of 32 years old at the end of the combined deal, still time to garner a small contract to finish out his career if he's healthy and producing.

Value of the Contract
Charles certainly didn't exceed the statistical production of our variable running backs - either in the Rushing or Passing game. When factoring in the Average (-9.53%) and Median (-18.11%) prime figures to our original base contract, we're left with the following extension: