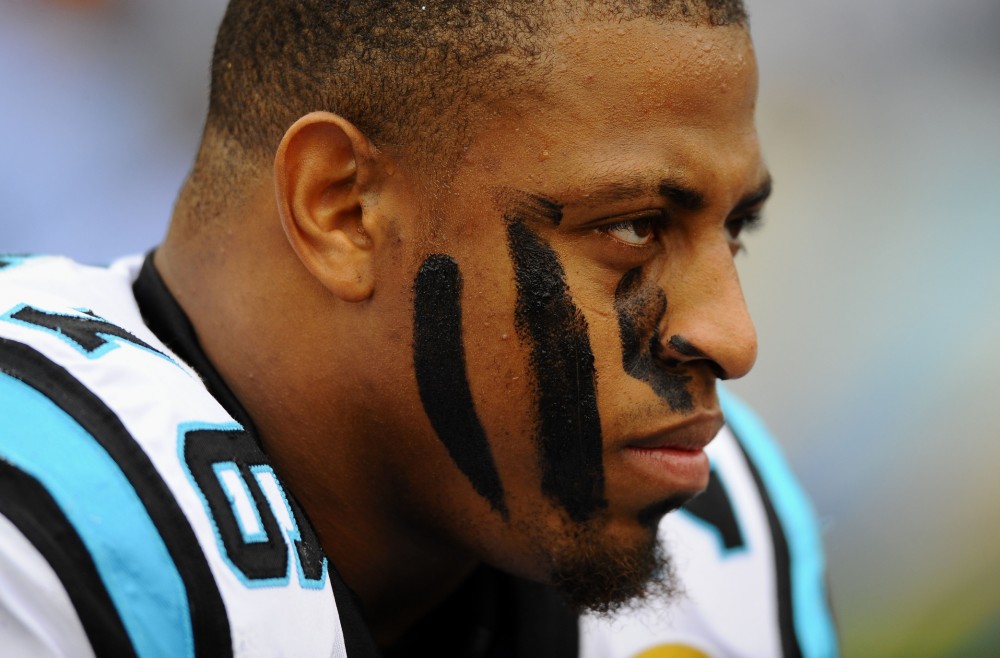 With the 2013 NFL season just around the corner, the Carolina Panthers don't appear to be done getting their current roster's long-term situation in order. Reportedly in talks with their young defensive end Greg Hardy, the Panthers have positioned themselves well for extensions like these, having turned around nearly $28M in cap space in the past calendar year of work.

Hardy comes off an impressive, possibly break out, 2012, ranking #6 on Pro Football Focus' 4-3 Defensive End charts, and having just turned 25 years old, is in position to become a long-term pass rushing fixture in Carolina.

We'll put him through the projection formula to analyze his statistical comparison to a few relevant ends in the league, and produce a forecast for the coming extension.

Comparable 4-3 Defensive Ends
Hardy just turned 25 (July 28th), the standard age for sophomore contracts to be signed. To determine a more likely starting point for our numbers, we'll perform a linear regression of each contract breakdown listed below.

Because Hardy (25) is younger/older than some of our variable linemen were at the times of their signings, we'll adjust the above contracts up/down to his age by adding/subtracting from the overall years to make each variable player 25 years old. Once a linear regression is performed on these new numbers we're given the following terms to begin with:

Statistical Analyzations, Prime Percentage
Now let's analyze these players statistically in the year prior to signing their second contract by showing Games Played, Sacks, Tackles, Solo Stops, and Penalites.
Our results here show that Hardy is surprisingly inline - and in some instances above the target players. With the exception of a high number of penalities over the past few seasons, his numbers across the board are above average. In comparing him directly to his teammate Johnson, Hardy exceeds on all fronts. He gets the quarterback, stops the run, and can do all this in solo-fashion as well. We'll factor his slight Prime Percentage of 6.41%, into our previously determined base numbers.
Guaranteed Money
Hardy has shown the 3 major keys to earning himself a highly guaranteed contract: Production, Improvement, and Durability. A linear regression on the variable contracts used in this analyzation provides us with the percent of money Greg should receive as true guaranteed with this new extension.
Results

Length of the Contract
Young pass rushers are still prime contenders for long-term deals in the modern NFL. The Panthers gave Charlson Johnson a 6 year deal at this age in 2011, so there's no reason to believe Hardy won't get 6 as well.

Value of the Contract
The statistical breakdown of Hardy in comparison to our variable defensive ends may have raised some eyebrows - as he clearly matches up. A big 2012 leaves him in a prime seat to cash in right now, and the Panthers appear to be following suit. Outside of penalities, his numbers add up to a positive prime percentage, and nearly 35% of his deal to be guaranteed.