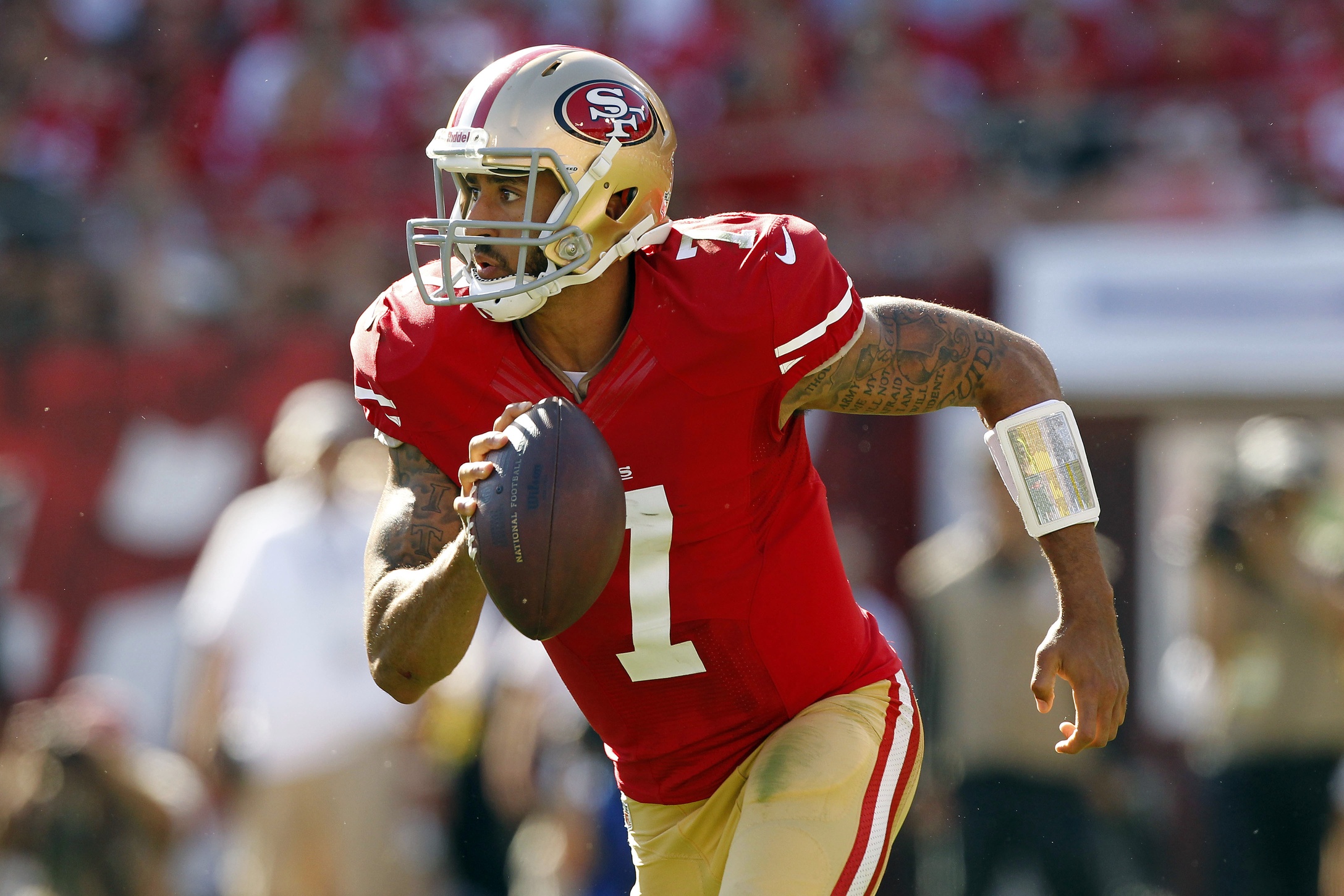 Colin Kaepernick has led the San Francisco 49ers to back-to-back NFC Championship games, and a Super Bowl appearance in 2012. His dyanmic play style mixed with a fiery personality (much like his head coach), has returned the 49ers to their elite status. Now through his third NFL season, Kaepernick is eligible for an extension to his $5.12M rookie scaled contract. As of now, he's set to earn $1.073M in cash, with a cap figure of $1.63M for the 2014 season.

Much like our forecast for Panthers QB Cam Newton, Kaepernick's unique skill set lends itself to varying evaluation methods. He may be the first of the current generation of "young mobile quarterbacks" to be granted a long-term contract.

To compensate for this, we'll revise the statistics used in our analysis to include Rushing Yards, and Total Touchdowns (Passing + Throwing). Additionally, we'll take a look at the Top 10 rushing quarterbacks since 2011 to find where Kaepernick falls solely based on his run game.

We'll assess Kaepernick's statistical performance in 2012-13 and compare them to quarterbacks of similar age and production to determine and forecast a possible extension this offseason.

Comparable Quarterbacks
To generate a prediction the Spotrac team determined that the following quarterbacks were viable targets to use in comparing with Kaepernick. The key was to locate players with similar numbers, who signed their second contract around Colin's current age (26). Here's a look at the new money for each extension signed by each. To determine a more likely starting point for our numbers, we'll perform a linear regression of each contract breakdown listed below.
At 26 years old, Kaepernick is younger than the majority of our variable quarterbacks (Matthew Stafford signed at age 25). We'll adjust the above contracts up/down to reflect each as if it were signed at the age of 26 to provide a better scope for our base prediction.

Due to the need to include the rushing aspect of his game, our choice of statistics used to evaluate Kaepernick will differ from many of our other QB forecasts. To derive the most complete set of production comparisons, we'll use Games/Season, Passing Yards/Season, Completion %/Season, Total TDs (Passing & Rushing)/Season, , Interceptions/Season, and Rushing Yards/Season.

To assess how well the player was performing prior to signing their respective contract, we'll show the averages of these statistics two years prior to their signing date. Becase Kaepernick entered the 49ers lineup a few games into the 2012 season, we've done the math to project his statistics as if he were the starting QB for all 16 2012 games. The two-year analysis will give us a "Prime Percentage", showing how well that player was performing when the contract was signed in relation to his overall career.

Contrary to what the 2013 NFC Chamionship game may have showed, Kaepernick has been great at keeping the ball out of the other team's hands regularly. Where he lacks in passing yards (-38%), he makes up for with his legs. A drop in completion percentage in 2013 might be of note, as it dipped under the 60% mark. We'll factor his slight -2.04% Prime Percentage into our base numbers.

Quarterback Rushing Stats Since 2011
The following shows a cumulative breakdown of rushing statistics by quarterbacks from 2011 through 2013. Kaepernick finds himself with the second most rushing TDs, and 6th most rushing yards per game among the mobile quarterbacks.

Length of the Contract
At 26 years old, and further instantiating himself as the long-term franchise quarterback solution in San Franciso, it's perfectly likely the the 49ers extend Kaepernick out 7-8 years (keeping in mind that many of these lengthy deals have outs WELL before their expiration). For purposes of evaluation, we'll keep the length of this forecast at 6 years, the mathematical average.

Value of the Contract
Our initial base contract provided an average salary of just over $20.13 million per year, a figure that would place him 3rd among active quarterbacks. Our statistical comparison brought that number down to early slightly, with a 2.04% decrease.

Quick Thoughts
As a former 2nd-round pick, the 49ers don't have the ability to exercise a 5th year option on Kaepernick (something the Panthers can do with Cam Newton). With nearly $119.4M cap dollars allocated to their 2014 salary cap already, and a fairly potent list of 2014 free agents the 49ers have some work to do to make ends meet this offseason. As it stands, Kaepernick's $1.63M cap figure ranks 38th among 2014 quarterbacks, certainly a value. Financial strain or not, it makes sense on both sides for this extension to get done in the coming months, even if it means restructuring other veteran contracts (Vernon Davis, Frank Gore) to find the space.