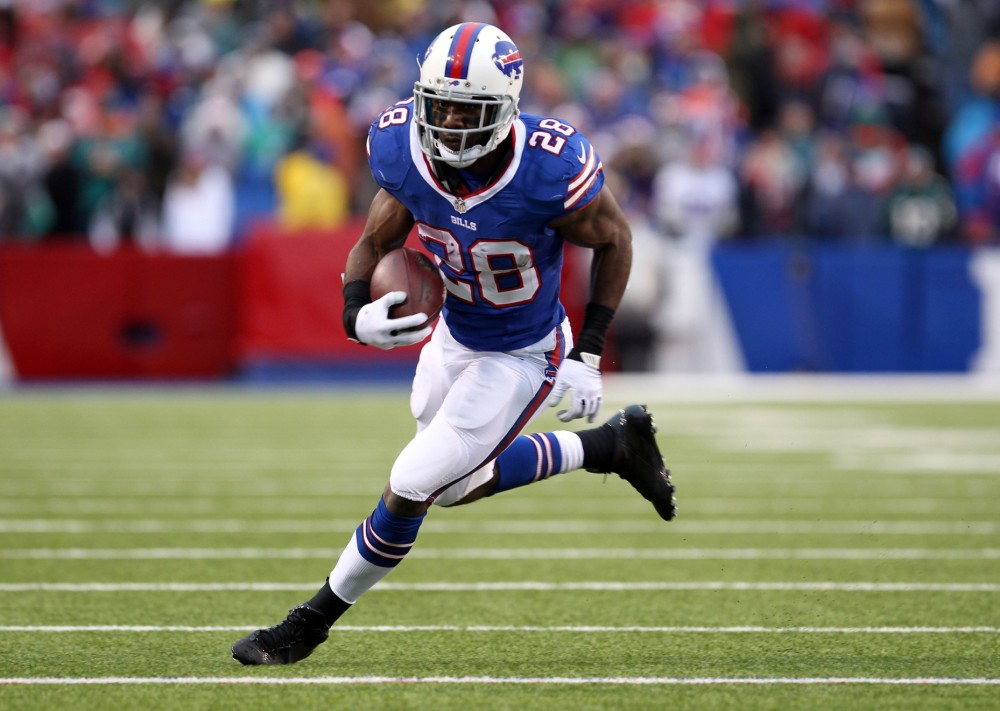 One of the more questionable scenarios forthcoming to the 2014 Buffalo Bills is the expiring contract of their former #9 overall running back, CJ Spiller. His 6 year $39.3 million rookie contract does contain a $2.196 million salary for the 2015 season - but Spiller has the option void it, a move he'll most certainly make. By all comparisons, Spiller has been an inconsistent weapon for the Bills, battling changes in personnel, injuries, and a lack of trust/support in terms of play-calling (in some instances deservedly so).

It's without question that Spiller's athletic ability makes him a game-changing type of weapon, but in the current NFL where running backs value have been nearly halved, a player with injury and inconsistencies in their past simply doesn't have a chance to cash in at a maximum figure. Furthermore, the drastic move to trade up and select the uber-athletic Sammy Watkins earlier this month raised plenty of eyebrows across the league, and even moreso de-valued the need for a big-play back like Spiller (at least a highly paid one).

All this said, CJ Spiller has been above average both in terms of rushing and receiving through his first four NFL campaigns. Many speculate the previous Bills regime widely under-utilized the back, and in some cases, mishandled his snaps. He's shown signs of greatness, and has continually matured into a smarter, more decisive running back for the Bills.

Spiller will most likely have the opportunity to play the 2014 season for his next payday, as the Bills have not yet hinted that an extension is in the works. With a marketdly low bar in terms of what a "maximum contract" might be for a 27 year old free agent running back, the Bills will be smart to play their hand this season, in hopes that a more consistent and productive season can result in a reasonable contract for both parties.

We'll run Spiller through our projection formula, now utilizing statistics from the 2012 & 2013 seasons, to predict what the Bills would be looking at in terms of a value-based extension as it currently stands.

Comparable Running Backs
Spiller will turn 27 on August 5th, an age smack dab in the middle of comparable running backs who'ved signed recent contracts. We've selected variables that have similar skillsets to Spiller: i.e. the ability to both run and catch within their offensive framework. To determine a more likely starting point for our numbers, we'll perform a linear regression of each contract breakdown listed below.

Because Spiller will be both younger and older than all of our variables at the times of their signings, we'll adjust the above contracts up/down to his age by adding to the overall years to make each variable player 27 years old. Once a linear regression is performed on these new numbers we're given the following terms to begin with:

As you might expect, Spiller's numbers simply do not hold up not only when factoring in the statistics from our four variable backs. LeSean McCoy, the clear breadwinner in this bunch - is important in that he was the most recent "major contract" for a running back. For Spiller to even be considered for major dollars, he'll need to garner a MUCH bigger role in the Bills' offense - something that doesn't appear to be coming anytime soon.

While the figures match up a bit better here, Spiller still finds himself well below the bar being set by our variable running backs. Both Forte and Mccoy are targeted nearly 5 times a game - accounting for nearly 20% more production in the air from the backfield. With a weapon like Sammy Watkins coming into the fold, it will be interesting to see if Spiller's receiving game is even moreso diminished in the coming season.

Length of the Contract
Our variable receiver contracts averaged out to 3.5 years. Soon to be 27, one would assume rounding up to a 4 year contract would be feasible. But times have changed with the league. Perennial All-Pros such as Chris Johnson, Maurice Jones-Drew, and Steven Jackson signed for 3 years or less in the past 18 months. And Spiller's counterback back Generally speaking, the trend has been to carry a running back to the age of 30 with their sophomore contract - but with Spiller already under contract for 2014, we'll give him a 3 year extension through the age of 31.

Value of the Contract
Spiller has been through a complete overhaul offensively in Buffalo, but regardless, his role seemed to change week in and week out. The acquisition of Sammy Watkins further supplants the Bills true question about Spiller's ability to make consistent game-breaking plays every offensive series, and his numbers have followed suit. His next contract should be consistent with his inconsistency - heavily incentive-based, with an obvious out after 2 years. When factoring in the overall Statistical Prime Percentage of -24.55%, we're left with: