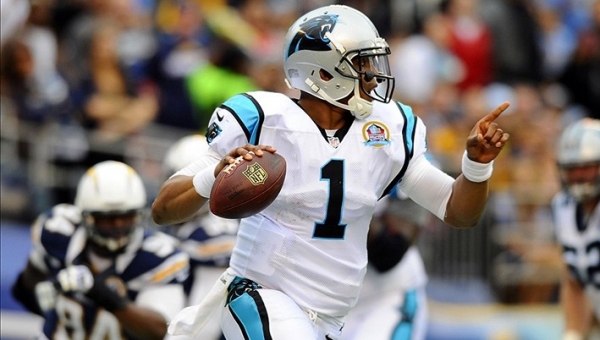 He's got 11,603 yards, and 79 touchdowns through 41 games in his young career. But with just 19 wins, the measure on where Carolina Panthers' quarterback Cam Newton stands in terms of status is tough to gauge. The Panther's have quietly become a contender in 2013, in large part to the consistently strong play from Newton, and with his $22 million contract set to expire after 2014, the discussions regarding an extension are forthcoming.

Our forecast for Cam will be unlike any we've done prior, as his unique skill set lends itself to varying evaluation methods. Newton will be the first of the current generation of "young mobile quarterbacks" to be granted a long-term contract. Not since Michael Vick in 2004 has a quarterback with the ability to pass and throw at an elite level been considered for a maximum pay-day, and the game has changed immensely since.

To compensate for this, we'll revise the statistics used in our analysis to include Rushing Yards, and Total Touchdowns (Passing + Throwing). Additionally, we'll take a look at the Top 10 rushing quarterbacks since 2011 to find where Cam falls solely based on his run game.

The following is the full report, predicting the next contract for the 24 year old Panthers' quarterback.

Comparable Quarterbacks
To generate a prediction the Spotrac team determined that the following quarterbacks were viable targets to use in comparing with Newton. The key was to locate players with similar numbers, who signed their second contract around the current age of Newton. Here's a look at the contracts signed by each. To determine a more likely starting point for our numbers, we'll perform a linear regression of each contract breakdown listed below.
Newton is just 24 years old, a young age for a sophomore contract extension on average. We'll adjust the above contracts down to reflect each as if it were signed at the age of 24 to provide a better scope for our base prediction.


Statistical Analysis
The analysis for Cam Newton will be unlike any other quarterback previously forecasted in our system, due to the need to include the rushing aspect of his game. To derive the most complete set of production comparisons, we'll use Games/Season, Passing Yards/Season, Completion %/Season, Total TDs (Passing & Rushing)/Season, , Interceptions/Season, and Rushing Yards/Season.

To assess how well the player was performing prior to signing their respective contract, we'll show the averages of these statistics two years prior to their signing date. This will give us a "Prime Percentage" for each player, providing us with a snapshot for how well that player was performing when the contract was signed in relation to his overall career.
Where he lacks slightly in his passing game, he more than makes up for with his feet. His slight dip in passing yards per season, and even less so in terms of completion percentage or more than compensated for in the rushing game. Cam is actually considerably comparable to these variable quarterbacks in terms of passing - and a quick look at the 2013 numbers even improve his standing in this regard. We'll factor his slightly positive 14.51 Prime Percentage into our base numbers.

Quarterback Rushing Stats Since 2011
The following shows a cumulative breakdown of rushing statistics by quarterbacks from 2011 through 10 weeks of 2013. While Cam Newton's rushing touchdown total is all-world, his yards per game number has actually been exceeded by a few mobile quarterbacks. Bottom line, no quarterback is rushing more times, for more yardage, and finding the end zone even close to more than Newton in the past 41 games.

Results
Length of the Contract
At just 24 years old, and having increased his production every year in the league, Newton is on pace to reach a maximum deal with the Panthers in the coming 24 months. We'll keep the length of this forecast at 6 years, the mathematical average.

Value of the Contract
Our initial base contract provided an average salary of just under $15 million per year, a figure that would place him 11th among active quarterbacks. It's no secret that any negotiable increase in this number has to do solely with Cam's efforts in the rushing attack. If Carolina (or other teams) consider this to be as valuable as his respectable passing game, then our 14% Prime increase is merited.
Spotrac's Prediction: 6 years, $102,322,274
Average annual salary $17,053,712, estimated $35,641,237 guaranteed
Follow Spotrac on Twitter, and keep up with even more on Facebook.