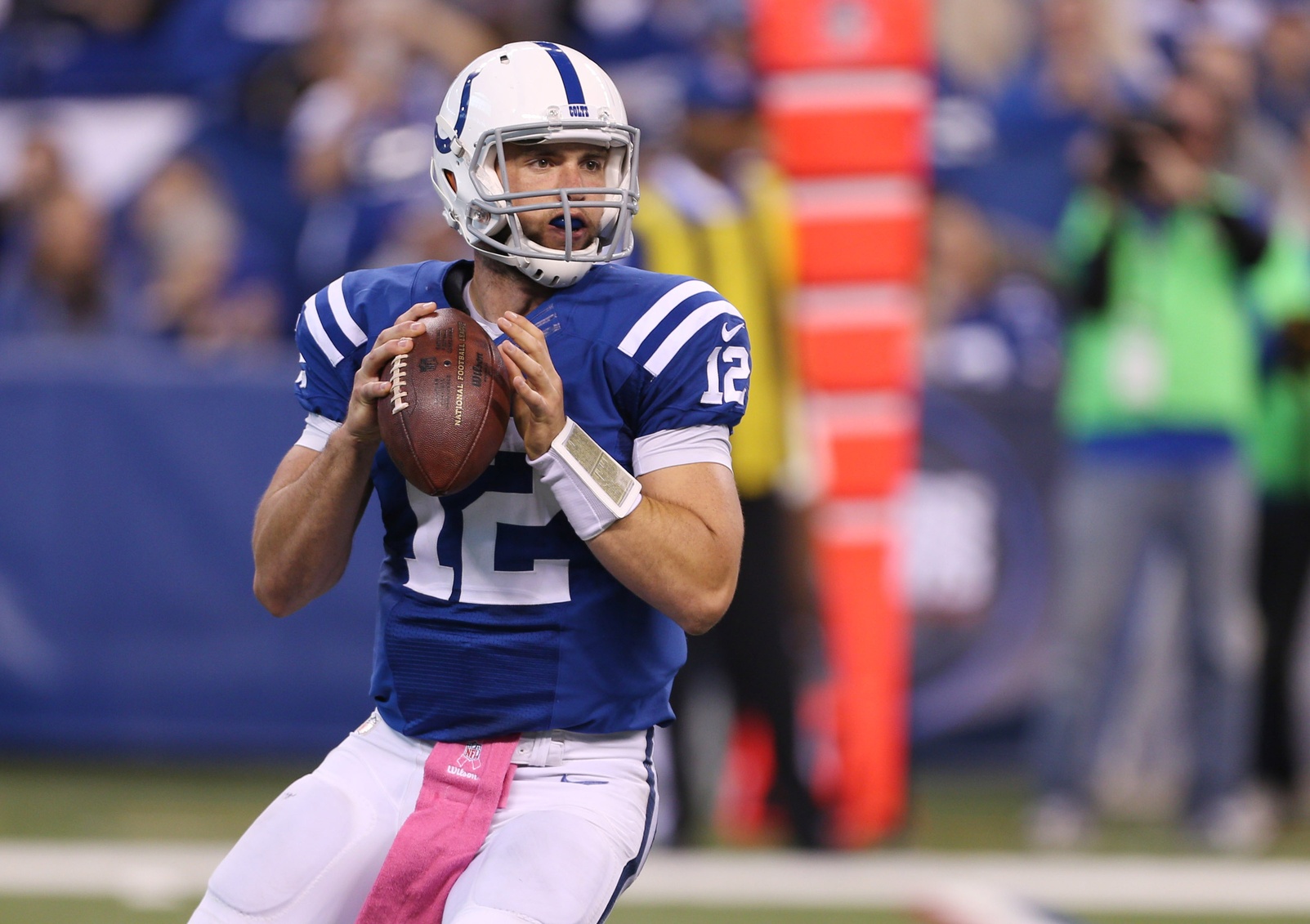 He's gotten progressively better in each of his first two and a half seasons, and now the sky appears to be the limit for Colts QB Andrew Luck. With subpar running options, the Colts have opened Luck's passing game up in 2014, and the former #1 overall selection isn't disappointing. Through five weeks he's passed for 1,617 yards, 323.6 yards per game, and 14 touchdowns - all NFL leading numbers. He's also rushed for another 75 yards, scoring two touchdowns on the ground.

The 2015 offseason marks extension eligibility for Luck, and it's likely the Colts won't wait around too long to lock in their leader. We'll assess his production since 2012, comparing it to a set of variable quarterbacks, to forecast what his best value contract would look like as of today.

Comparable Quarterbacks
To generate a prediction the Spotrac team determined that the following quarterbacks were viable targets to use in comparing with Luck. The key was to locate players with similar numbers, who signed their second contract around his current age (25). Here's a look at the new money for each extension signed by each. To determine a more likely starting point for our numbers, we'll perform a linear regression of each contract breakdown listed below.
At 25 years old, Luck will be younger than all of our variables. We'll adjust the above contracts down to reflect each as if it were signed at the age of 25 to provide a better scope for our base prediction.

To derive the most complete set of production comparisons, we'll use Games/Season, Passing Yards/Season, Passing Yards/Game, Passing TDs/Season, INT/ Season, and Completion %/Season. To assess how well the player was performing prior to signing their respective contract, we'll show the averages of these statistics two years prior to their signing date. The two-year analysis will give us a "Prime Percentage", showing how well that player was performing when the contract was signed in relation to his overall career.

It's a pretty safe push here. Luck's throwing for a bit more yardage, and few more touchdowns, but also a few more interceptions. We'll factor these Prime Percentage into our base numbers.

Guaranteed Money
Luck has played in all 38 regular season games since entering the league in 2012. He's shown durability, and has put together increasingly winning seasons his entire career. We'll eliminate the negative prime percentage noted above and use the straight average percent guaranteed going forward.
Results

Length of the Contract
At just 25 years old (won't be 26 until next September), Luck is in a great spot to cash in twice before the age of 30. While the adjusted averages point to a 6 year deal, we'll keep it at 5, giving Luck that luxury.

Value of the Contract
Our initial base terms brought forth an average annual salary just over $19M per year, a figure that would make him the 6th highest average paid quarterback in football. When factoring in our prime percentages, we're given an overall annual base salary of $19,220,000 - which leaps him ahead of Peyton Manning into the 5th highest average paid quarterback. At best value, Luck should receive around 40% of the deal guaranteed, or $38.44M.

Quick Thoughts
As a 1st round pick, the Colts do have the ability to ride his rookie contract out, exercise a 5th year option, and try to delay the process of a big contract. But with his character, annual improvement, and leadership capabilites, it's much more likely that Luck is offered the deal as soon as possible. The Colts have $107.4M cap dollars allocated in 2015, to 38 players - meaning much of their core is already under contract. All signs point to next being the payday for their franchise quarterback.