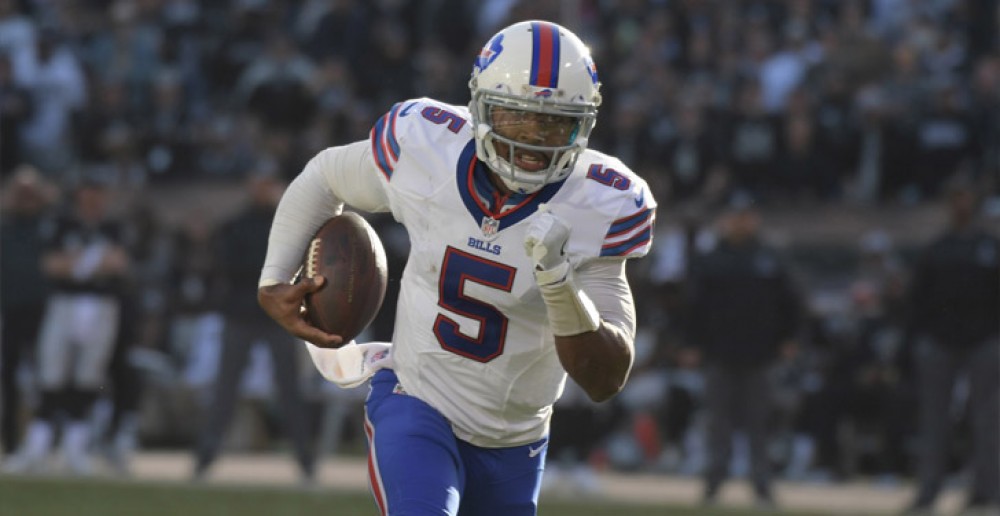 Bills QB Tyrod Taylor carried over a productive 2015 season through a solid first half to 2016. But a decimated wide receiver arsenal and some inconsistent play from Taylor has many in Buffalo pondering the upcoming option deadline on his unique contract.

It doesn't take much to show that Taylor's production has dropped off in 2016, especially when comparing to his strong 2015 efforts. (Rankings based on QBs who played at least 75% of the team's games).

It's important to remember that the total value of veteran NFL contracts is mostly just for show these days, as the majority are cut well short due to releases or extensions. However for vanity purposes, Taylor's $90M new money contract ($7.5M raise in 2016 + $82.5M extension) ranks 9th highest among active QBs. His $18M average annual salary ranks 17th, tying him with Cowboys' backup QB Tony Romo, and Texans' free agent signing Brock Osweiler.

Should the Bills exercise the option, Taylor receives a $15.5M bonus (that pro-rates at $3.1M per year through 2021. In addition Taylor's $12M salary for 2017, and $3.25M of his 2018 salary become fully guaranteed automatically. This $30.75M guaranteed at signing represents 37% of the total contract, which ranks 18th among active veteran QB multi-year contracts.

If he's on the roster come the 3rd league day of 2018 (early March), the remaining $9.75M of his 2018 salary fully guarantees, which brings his "practical guarantees" to $40.5M, or 49% of the total contract, which ranks 21st among active veteran QB multi-year contracts.

One of the more important factors to note with this contract is the structure of the dead cap, especially with the uncertainty of Taylor's long-term capabilites as a franchise QB. The good news? All of Taylor's salary guarantees lie within the first two years of the deal (2017 & 2018). The less than gooder news? His $15.5M option bonus next March makes for a decent chunk of dead cap toward the backside of this contract.

Assuming the option is exercised, Taylor will carry the following dead cap hits:

When factoring in cash flow, guarantees, and dead cap structure, the Bills are contemplating whether to exercise what is essentially a 2 year, $40.5M contract, fully guaranteed. Should they need to get out after 2018, Buffalo would be slapped with a $10.66M dead cap hit, which if designated as a Post-June 1st release would split into $3.78M in 2019, & $6.88M in 2020.

Assuming a $168,000,000 team salary cap in 2017, the Bills currently have an estimated $32M in cap space, with 36 players under contract, making cap space a bit of a concern, especially with a decimated secondary to rebuild. Should the Bills feel like Taylor's recent production doesn't warrant this type of Top 15 QB money, they can decline the option with hopes of re-signing him at a lower price, but will likely need to contend with the New York Jets, San Francisco 49ers, Chicago Bears, etc who will be heavily in the market for a QB1 next offseason.