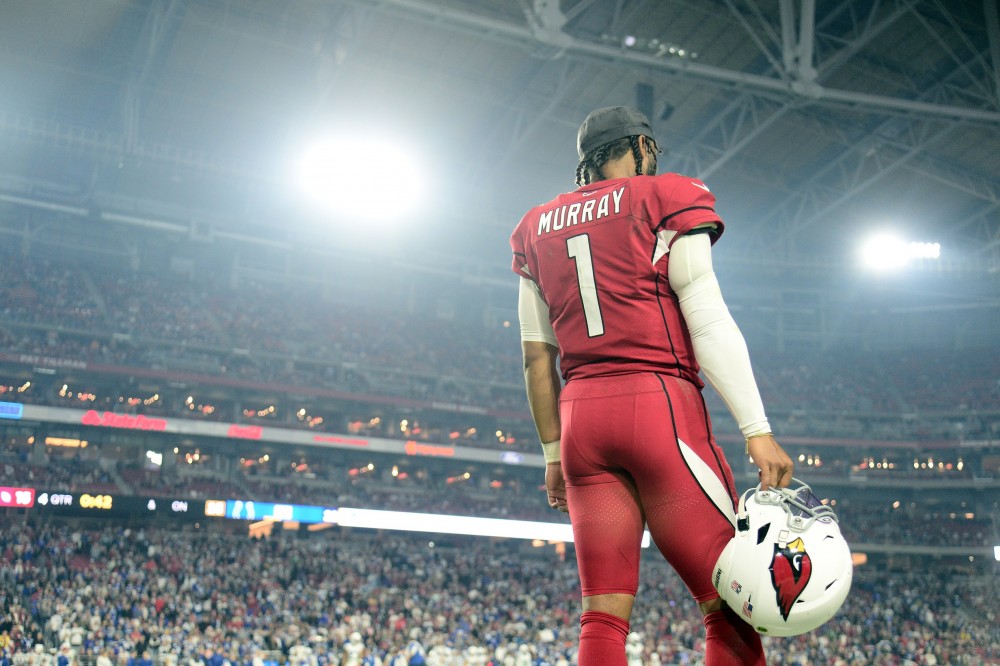 Kyler Murray’s expected contract extension came in where we expected it to come in. The 7 year contract comes with 5 new years, $230.5M in new money. Of that, $104.3M is fully guaranteed at signing, $134.2M guaranteed by March 2024, and early vesting salaries through the 2027 season. What does it all mean? We’ll try to debrief the deal as much as possible here.

Love it or hate it, most of the NFL world still uses the average salary as the bragging point for a shiny new contract. In Murray’s case, his $46.1M AAV keeps him well behind Aaron Rodgers’ $50.2M, but $100,000 ahead of Deshaun Watson for 2nd place.

But unlike Watson, Murray’s deal isn’t a ripped up brand new contract, or a full guarantee, so we need to dive deeper to dissect this figure.

Kyler Murray will see $30M in 2022, a $25M pay raise from previous contract year. That $30M of Year 1 cash ranks 10th among active QB contracts, but it’s $10M more than Josh Allen received in his first new contract season, and $19.1M more than Mahomes scored in 2020. Watson’s contract comes with an even $46M cash per year.

Through Year 2, Murray will have reeled in $69M, 8th among active quarterback contracts, $2M more than Allen, $36M more than Mahomes. Watson will (could) have earned $92M through two years on his contract with the Browns.

The however noted above comes in the 7th year of this contract, where Murray is slated to earn a non-guaranteed $46.35M, the highest cash compensation on this contract, and a bit of “fluff” added to the backend to ensure the originally noted $46.1M AAV came in as such.

Deshaun Watson aside ($230M), Kyler Murray’s contract is the 2nd highest guaranteed deal in NFL history, each from a fully guaranteed at signing standpoint, and in terms of practical/injury locks.

By putting pen to paper, Murray has officially locked in $104.3M of cash:

The contract remains somewhat dormant until March of 2024, when another $29.9M becomes fully guaranteed:

That’s 6 seasons of early vested compensation, an extremely rare sighting in the NFL.

The Cardinals added about $1.3M of salary cap in 2022 per the Murray extension (I had previously reported a significant cap decrease, but made an error in failing to bring over proration from the rookie contract).

The surprising number here is the $16M hit in 2023. Generally these large contracts include a bloated 2nd year, with a restructure baked into the cake. By going with a double bonus structure (signing bonus in 2022, option bonus in 2023), they’ve already built the dead cap in, and will take on a significant amount of cap savings for the 2023 year. Murray’s 5th year option was set to carry a $29.7M cap/cash hit. Arizona now chops off $13.7M of cap in 2023.

With early guarantees built in all the way down to 2028, and just $7.1M of dead cap now sitting in that final season, it’s safe to assume that the Cardinals can restructure this contract at least two times without punishing themselves too much by its conclusion.

Kyler Murray’s contract contains an abnormal amount of offseason and per game protection.

Obviously the per game bonuses can be money lost for Murray should injuries come into the fold, but the other elements of this contract are very much pro-player. Where many traditional contracts contain a year 1 signing bonus, a March roster bonus here or there, and simple P5 base salaries, Murray will have a chance to cash in multiple times in each calendar year. In most cases, he’ll receive a March bonus, a summer workout bonus, an in-season salary, and additional bonuses for games active.

In addition to the above, Murray’s contract contains the opportunity to add $7.5M more in unlikely to be earned incentives. These break down as a maximum $1.5M per year, including:

Did Deshaun Watson’s contract impact the final draft for Kyler Murray’s extension? Our immediate response would be, no. If anything, this is simply a cap adjusted version of Josh Allen’s contract, with better cash flow, slightly better guarantees at signing, and $10M more of practical guarantees. The guarantee mechanisms in Murray’s contract resemble only Patrick Mahomes, as no other player has an early vesting salary that carries 6 seasons. Josh Allen’s early guarantees end in 2025, making his contract a 5 year, $164.5M deal for practical purposes.

In Murray’s case here, the early trigger in 2027 means this is a 6 year, $219.3M contract for practical purposes. It’s a huge haul for a player that has faced about as much criticism as he has praise through 3 NFL seasons, including a Wild Card loss in his single playoff appearance.

With cash being dispensed all over the year on this contract, there’s very little room for an out. But the double bonus (plus likely 2024 restructure) will also mean quite a bit of dead cap left with Arizona should they look to bail out and trade Murray at some point in the next 3-4 years.

Like it or not Cardinals’ fans, this is a contract constructed to stay for the long-term.