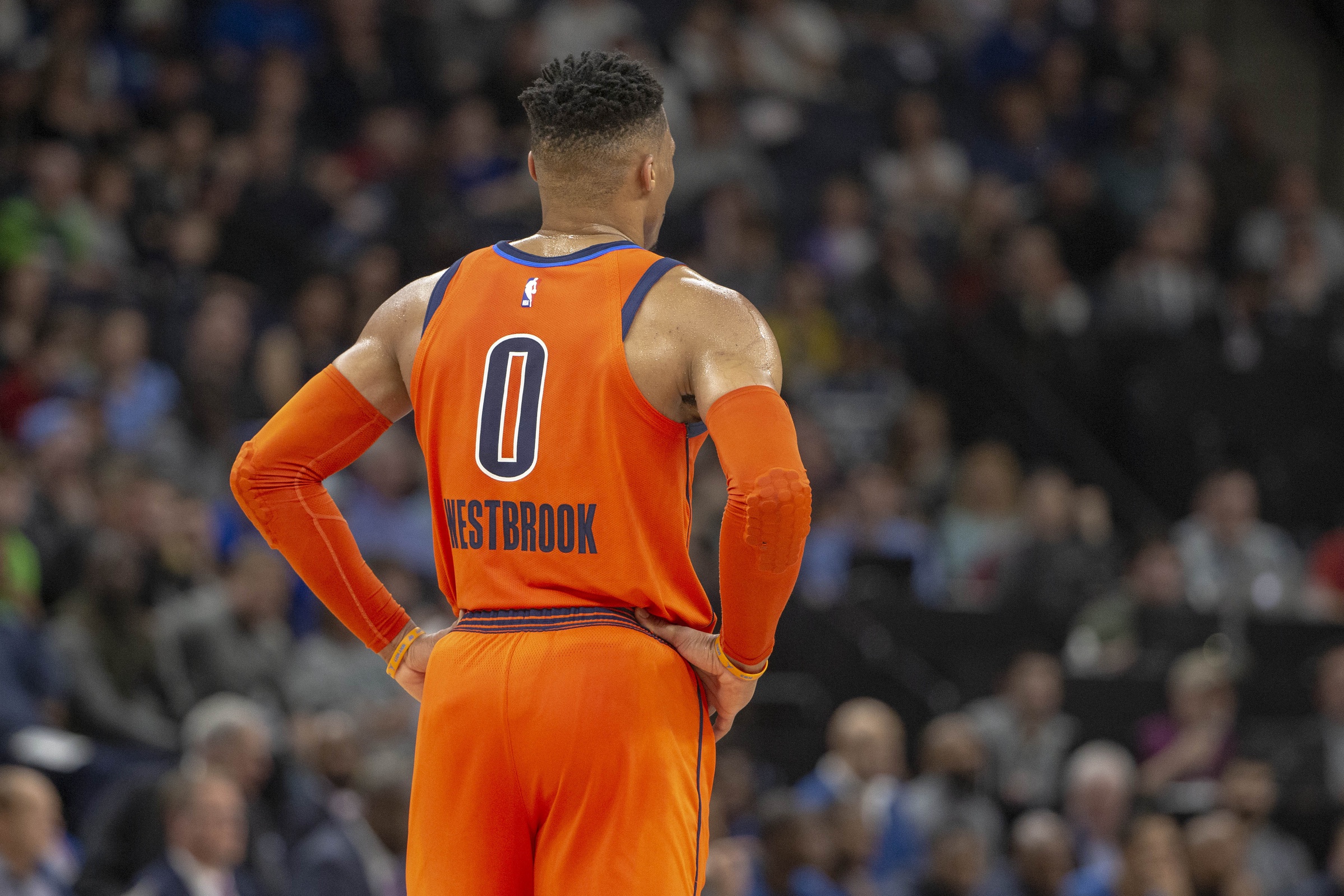 With the shocking acquisition of Paul George in addition to Kawhi Leonard, the Los Angeles Clippers may have intentionally forced Oklahoma City Thunder’s GM Sam Presti to begin his re-building process, a move he knew was going to become necessary in the very near future. The Thunder have paid out nearly $100M of luxury tax fines over the past two seasons because of their gaudy cap, and with George now out of the picture, will certainly be looking to get out from under the luxury tax threshold in 2019-20.

Currently, OKC needs to shed about $2.5M more to clear themselves, and they have until the end of the season to do so. However, all signs point to a Russell Westbrook trade being the Thunder’s next move, both from a financial and basketball point of view. We’ll dive into a few potential scenarios…

The Heat Get a Second Star for Jimmy Butler

While this move only clears $3M of cap space for OKC in 2019-20, it does enough to get them under the tax cap, while also adding a few legitimate pieces to their puzzle. Dragic brings a nice veteran presence to pair with Shai Gilgeous-Alexander, and his expiring contract can be a trade piece in January. Winslow brings over 2 years + a club option while also filling a small forward need on the OKC roster currently. Herro, the #13 overall pick this May from Kentucky, can be the incumbent replacement for Andre Roberson, who’s on an expiring contract in 2019-20. Meanwhile Pat Riley gets the second star he’s been clamoring for to pair with Jimmy Butler, bringing Miami to near contention status in a weakened Eastern Conference.

The Toronto Raptors swap Kyle Lowry for Westbrook, straight up

In a normal setting, Lowry’s expiring contract for four years remaining on Westbrook would require a load of draft picks attached to it to make logical sense. But teams know Westbrook is hot to be moved, and acquiring Lowry (and his rights) makes sense for an OKC team that won’t be bad enough to be awful, and still could find themselves near playoff contention with this projected move. If not, Lowry is a moveable piece at the deadline.

Toronto gets another dynamic offensive player in Westbrook to run their offense through, while also being the centerpiece to build around for 4 years - while much of the rest of their roster plays out expiring contracts in 2019-20.

Blake Griffin is due $110M over the next three seasons, while Andre Drummond can earn $56M over the next two. Dropping Westbrook into this conversation makes Detroit a risky, albeit strong contender in the Eastern Conference.

The Pistons likely part ways with former Thunder PG Reggie Jackson, Tony Snell, a prospect, and a high pick to get this deal done. Is this the smartest move for Detroit? No, but this franchise has been hard-pressed to come across Top 20 NBA talent, and this is a way to do it immediately. OKC can clear about $5M of 2019-20 cap with this projected move.

Two Out Two In for Houston

Rockets GM Daryl Morey has gone on record to say that putting three stars together is all the matters, the rest can be filled in from there. Clint Capela dropped out of “star” status in 2018-19 with Houston, and Chris Paul appears to be on a sharp decline before our very eyes. In acquiring both Westbrook & Steven Adams, Houston gets a fresh look at both positions, all while keeping James Harden, and glue-guy  P.J. Tucker in the fold.

For the Thunder, it might seem counterintuitive to bring in Chris Paul at $38.5M this year. But Paul has 1 less year on his contract, making him a more tradeable piece in the near future, and in attaching Steven Adams’ $25M salary to Westbrooks in this deal, OKC actually clears nearly $11M of cap space this season.