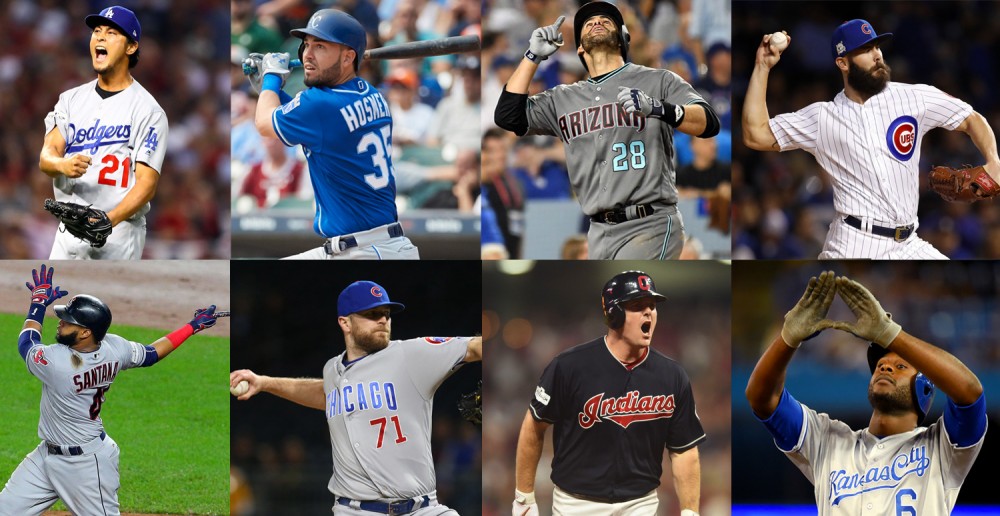 The MLB offseason is officially upon us. Options have been decided upon. Qualifying offers have been extended. And the free agent season has begun. We'll take a look at notable players from each position group who teams will be targeted this winter, including calculated & likely market value projections for their next contract.

Starting Pitchers
Unlike last season, the available free agent starting pitchers are bonafied top of rotation players. Darvish and Arrieta should push each other near the top tier of pay, while Lynn and Cobb will set the 2nd-tier market this winter. Qualifying offers will keep new contract prices from pushing through the ceiling.


Relief Pitchers
The top of this list comes with a hefty qualifying offer compensation tag, so teams will be somewhat hesitant to make the splash. But expect the Cubs, Astros, Cardinals and Rangers to make some noise in this area of concern.


Catchers
While Lucroy finally gets his chance to test the market, his value has dropped some $4M over the past two seasons. He'll command a nice price, but with the lack of teams in need of a #1 catcher, this market will likely settle in lower than usual. Castillo declined his $7M option in Baltimore, thinking he can grab more on a longer term contract. His calculated value slightly agrees.


1st Basemen
This is a good if not great free agent class outside of the additional compensation tied to Hosmer & Santana's qualifying offers. Both should still cash in nicely (though there's a chance Santana looks to stay in Cleveland). Morrison and Alonso had big power years, but lack consistency to bank a major long-term payday. They'll grab a nice chunk of money on a shorter term.


2nd Basemen
Walker has dealt with injuries and a dip in production since his strong 2016 campaign with the Mets. Add in a lack of need for 2nd basemen across the league and he might have a tough go this winter. Phillips is 36 years old but still producing at a high level and could be a great value for someone in 2018.


Shortstops
While Cozart appears to be the prize of this class, and likely the most expensive, Nunez has quietly put together very strong back-to-back seasons. Boston will push to keep him due to his versatility defensively, but outside offers may drive his price up considerably.


3rd Basemen
Moustakas and Frazier will garner plenty of attention, but Reynolds may be the dark horse in this class. After years of power with a pitiful average, Reynolds has become a more complete hitter since joining the Rockies. Colorado would do well to keep in him the fold.


Outfielders
This class goes where J.D. Martinez can take it. His numbers rival Cespedes' last winter, who garnered $27M from the Mets. Bruce's career numbers should have him valuing higher, but his deficiencies against lefties and as a defender will drop his price. Cain may be the surprise contract of the winter, as many teams are in need of middle outfielder with the complete package.