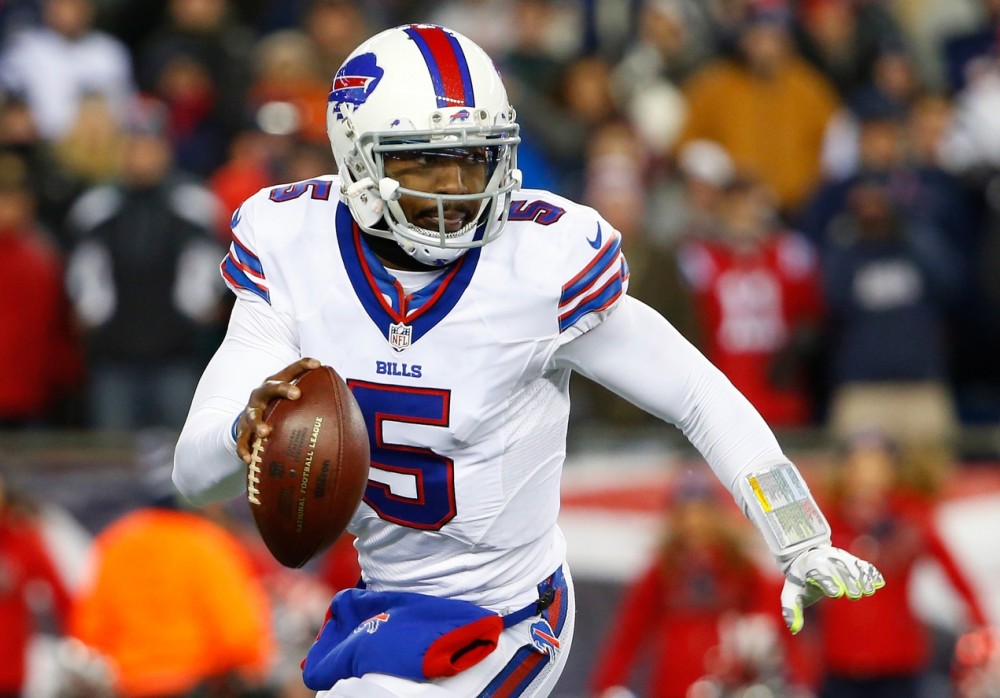 The Buffalo Bills have been in search of a legitimate starting quarterback since 1996, Jim Kelly's final season. Some believe that search may be over (for now), with the increasingly strong play of Tyrod Taylor this season. After 4 seasons behind Joe Flacco in Baltimore, Taylor was signed with the opportunity to win the starting role out of camp with Buffalo this past offseason.

While the team as a whole is average at best currently, Taylor's production through the air and with his legs has become notable. While he's signed through the 2016 season in Buffalo, he carries just a $1M salary ($1.1M cap hit) next year. Should he finish out the season on a high note, it's likely the two sides will come together to at least discuss the possibility of extending Taylor out a few years, especially to include guaranteed money. We'll assess the current market value of Taylor, albeit a small sample size of statistics, heading into Week 14.

Comparable Quarterbacks
To generate a prediction the Spotrac team determined that the following quarterbacks were viable targets to use in comparing with Taylor. The key was to locate players with similar numbers, who signed their second contract around his current age (26). Here's a look at the new money for each extension signed by each. To determine a more likely starting point for our numbers, we'll perform a linear regression of each contract breakdown listed below.
At 26 years old, Taylor is currently younger than Rodgers was at the time of his signing. We'll adjust his contract to the age of 26 to provide a better scope for our base prediction.


Statistical Comparisons
We'll assess Taylor as both a Passing and Rushing QB, comparing him to our variable QBS in terms of Passing Yards per Game, Passing Touchdowns per Game, Interceptions per Game, Completion % per Season, Rushing Attempts per Game, and Rushing Yards per Game. We'll weigh the Pass/Rush stats at a 70/30 ratio.
Taylor's pretty much on par with our variables here, devalued heavily for his carelessness with the football (fumbles), and a slight dip in overall Passing Yards in comparions. We'll factor both of these figures into our work below.

Length of the Contract
At 26 years old, and in his first season with consistent action, it's safe to assume that this deal won't stretch out to a huge length. Our base contract averaged 6 years, but with Taylor already under contract through 2016, it's much more likely that a 4 year extension at best is on the table.

Value of the Contract
A quick glance across the stat charts shows us that Taylor is a statistical match to Russell Wilson leading up to his new contract across 2013-14. The most surprising number for most has been his consistency in the passing game, completing nearly 65% of his passes thus far. Our initial base contract provided an average salary just north of $21M, a figure that would place him 4th among active quarterbacks. When factoring in our Prime Percentages:

Final Thoughts & More Likely Outcomes
Some may gawk at a market value of this magnitude for a somewhat unproven player, especially on a 6-6 Bills team on the outside of the playoffs looking in (for the 16th straight year). But mathematically speaking the numbers don't lie. Taylor is a Top 5 quarterback in terms of passer rating and least interceptions, Top 10 in terms of completion percentage, and one of the best 4th quarter QBs in all of football.

While a jump from $1M to $20M seems unlikely, this is simply a calculated look at how his inaugural season in Buffalo appears to be playing out. For purposes of risk/reward, it's more likely that the Bills offer a "nibble" extension to Taylor this offseason, possibly to the tune of Nick Foles' 2 year $24.5M deal with St. Louis

Based on the above calculations, our current new-money market value for Tyrod Taylor is:
Spotrac's Calculated Value: 4 years, $82,770,000
Average annual salary $20,692,500
Follow Spotrac on Twitter, and keep up with even more on Facebook.