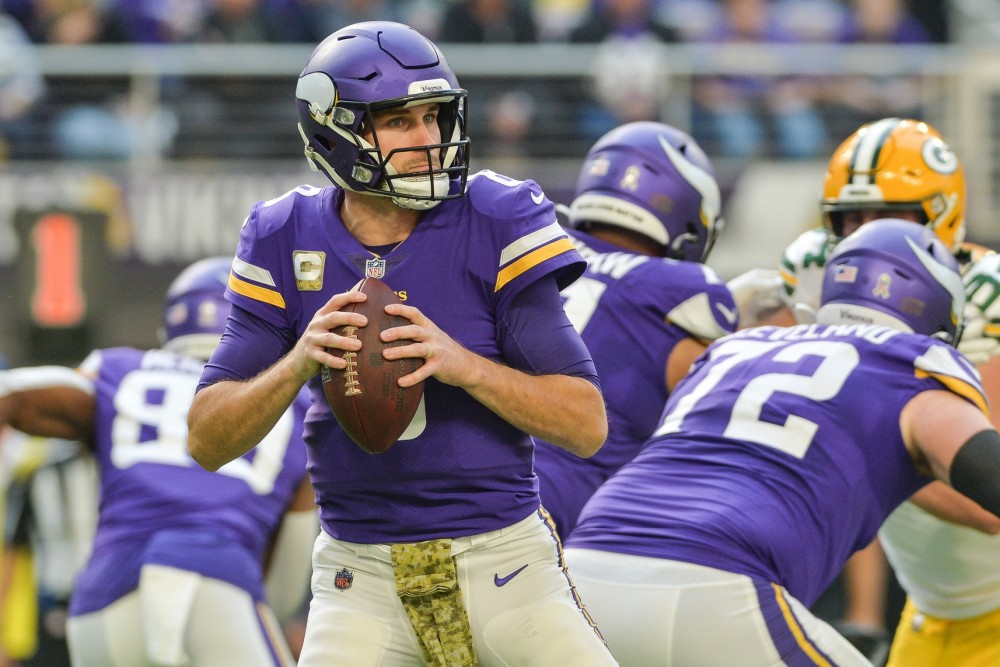 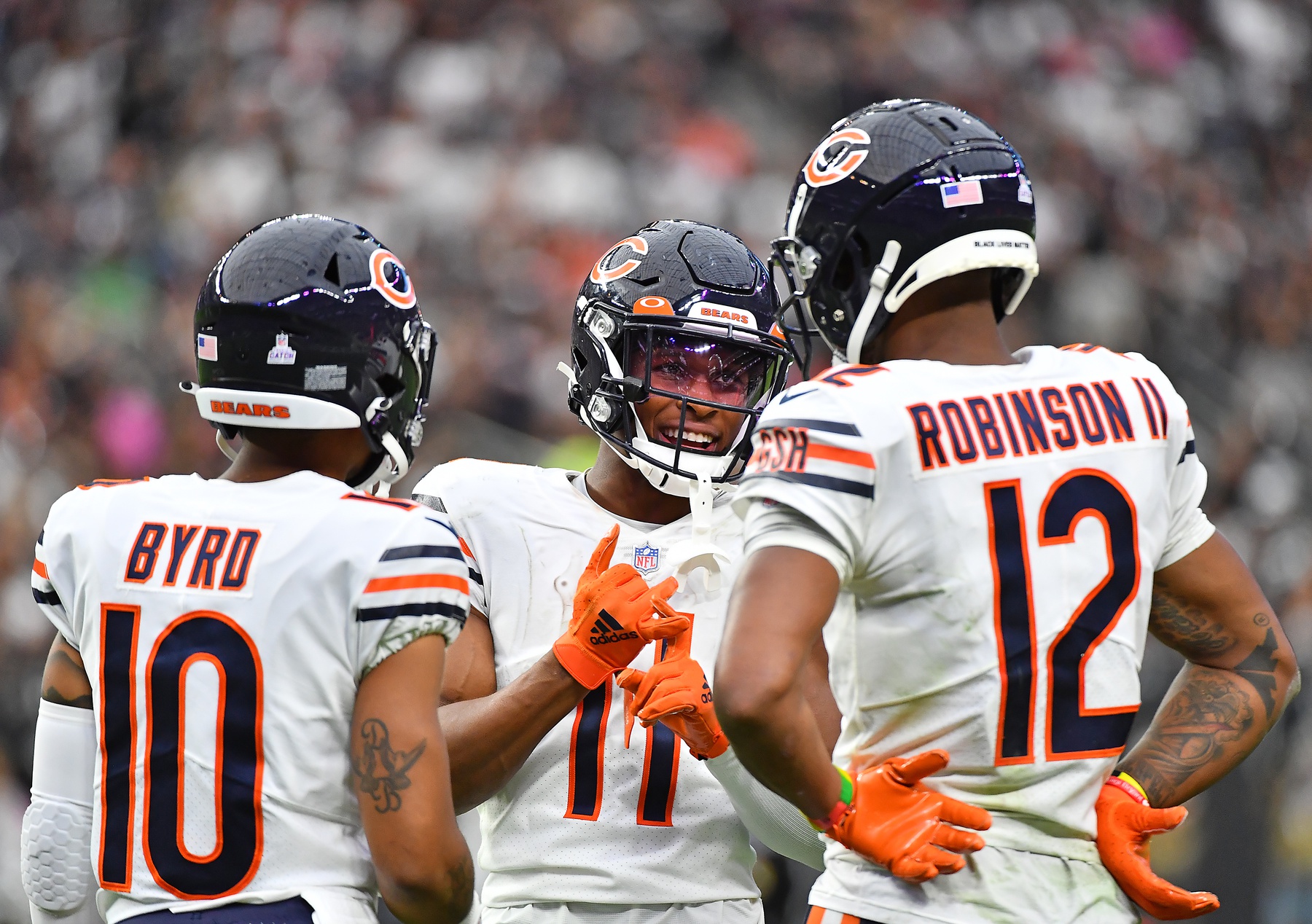 David Montgomery (RB, 24)
Montgomery has established himself as the dominant run option for Chicago over the past year and a half, with improved production in the passing game as well. He holds strong value over the last two years of his rookie deal ($1.1M, $1.2M), but should be in line for a 3-4 year extension tacked on. Joe Mixon’s 4 yr, $48M deal is a solid baseline.

Akiem Hicks (DE, 32)
Age isn’t slowing down Hicks, who remains a Top 20 defensive lineman according to PFF this year. While J.J. Watt’s $14M per year likely isn’t in reach, a 2 year extension in the $12M range could be.

Danny Trevathan (LB, 31)
Trevathan will finish the season on IR due to a knee injury, limiting his campaign to just 5 games in 2021. A post June 1st release frees up $3.5M of cap, but maybe more importantly $7M+ of cash. 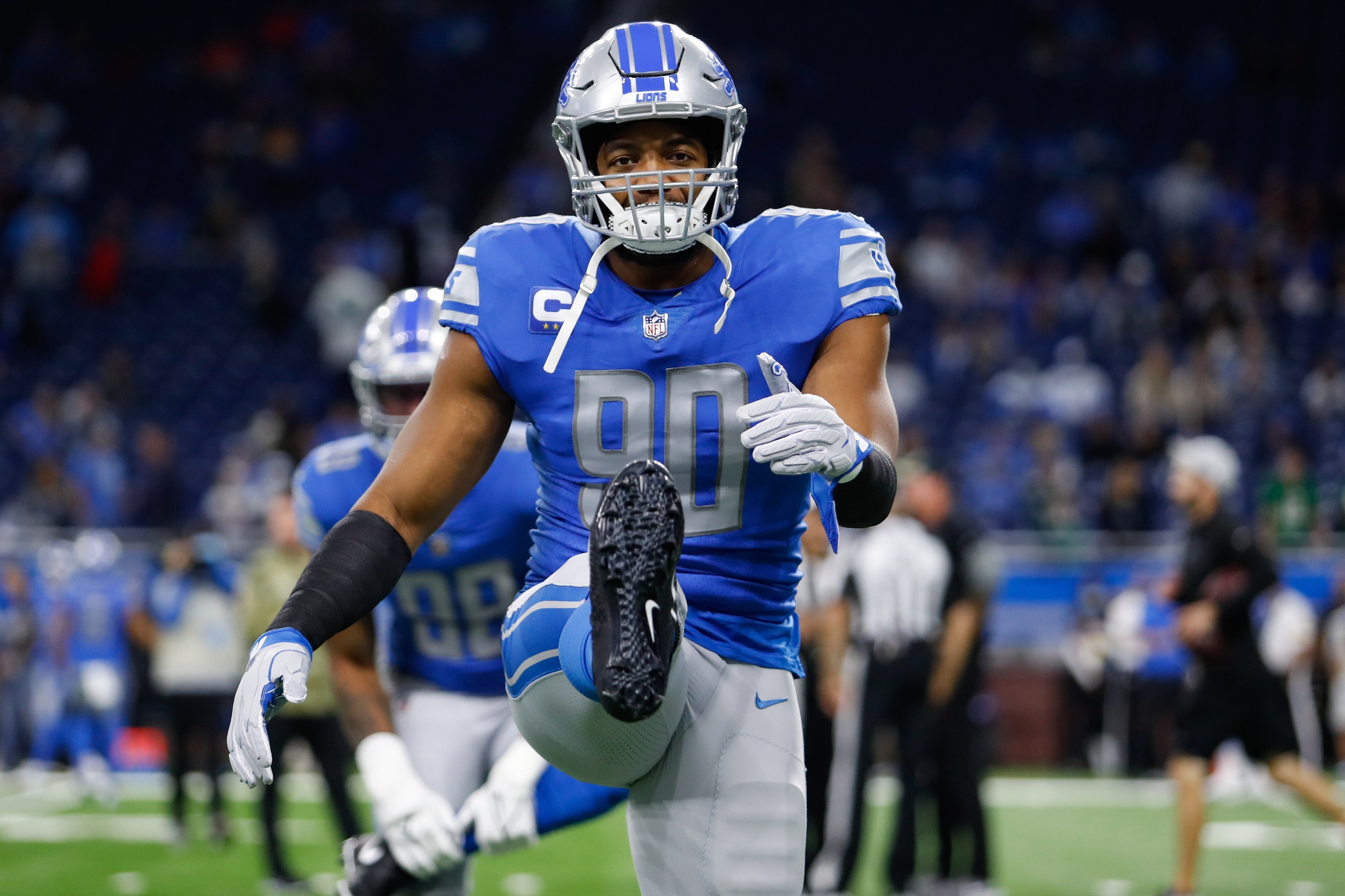 T.J. Hockenson (TE, 24)
Hockenson becomes extension-eligible after 2021, having played 40 games over his first 3 NFL seasons. His 2020 numbers (67 catches, 723 yards, 6 TDs) are probably a pretty good indication of what his next few years will look, so tacking on a few years to the two remaining on his rookie deal seems fairly safe. 4 years, $50M is the current baseline.

Charles Harris (DE, 26)
Harris has enjoyed a breakout season in terms of pass rush (7.5 sacks, 60 tackles to date). Was this a one-off, or can he be relied on for this type of production over the next few seasons? If Detroit thinks it’s the latter, Carl Nassib’s 3 year, $25M contract makes sense.

Michael Brockers (DT, 31)
Brockers joined Detroit on a 3 year, $24M contract this past March, but had minimal impact over the course of his first season. With $4M of his 2022 salary fully guaranteed, an outright release is unlikely, but there's a potential trade to be found here.

Trey Flowers (OLB, 28)
Flowers has been active for only 29 games in his 3 seasons with Detroit, having reeled in over $54M for his efforts. The Lions are on the hook for his $1.625M roster bonus (which became fully guaranteed last March), but there's a path to freeing up over $10M of cap space here regardless ($16M with a post 6/1 designation). 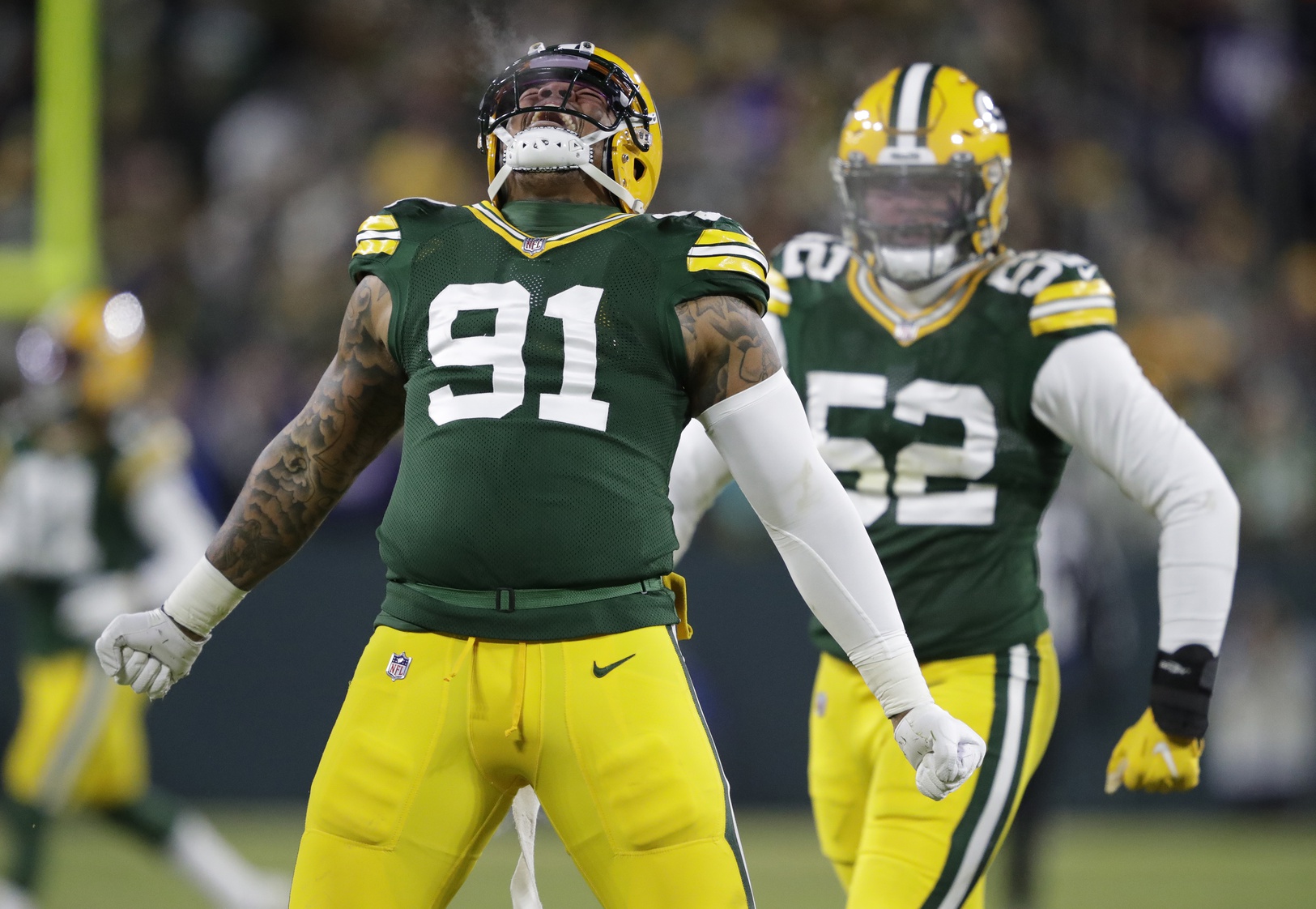 Aaron Rodgers (QB, 38)
Rodgers has 1 year, $27M left on the deal and is still performing at an MVP-caliber level, but it seems likely that money will be low on the list of whether or not he remains in GB to finish out his career. The 38-year-old holds a whopping $46.3M valuation in our system, projecting to a 3 year, $13 9M extension.

Davante Adams (WR, 29)
Adams’ current 4 yr, $58M is the biggest WR deal the Packers have given out in franchise history (by $18M). It’s likely going to take more than double that figure to keep him in the fold going forward. Adams projects to a 5 year, $133M extension currently in our system. A $20.1M tag will offer time to negotiate, though the Packers might need to slap an exclusive tag on him to keep other teams away (projects to about $23M).

Rashan Gary (OLB, 24)
Gary becomes extension eligible after 2021, with a Top 10 edge defender rank attached to his name, and production that nearly doubles his 2020 campaign. He's a $20M player based on the last two years, and a $25M player based on 2021 alone, so the Packers need to be prepared for a Bosa/Watt/Garrett type deal in their future.

Rasul Douglas  (CB, 26)
Douglas was released by the Texans in August, signed to the Cardinals p-squad in September, and signed from that squad to the Packers in October. Since then, he’s been one of their best defensive players, and a Top 20 graded cornerback in the league according to PFF. Is there a 4 year, $40M extension in the pending free agent’s future?

Preston Smith (OLB, 29)
Smith has 1 year, $12.5M left on his contract, but carries a $19.75M cap figure in 2022. Statistically speaking he’s having one of the best seasons of his career, and while GB will have bigger decisions to make, extending this contract out a few years for cap purposes seems to carry some logic. A rough 2020 holds his valuation down at $11M per year, but Leonard Floyd’s $16M per year extension could be in the cards here. Za'Darius Smith is in an almost identical situation here, but a back injury puts him a bit behind the eight ball right now.

Aaron Rodgers (QB, 38)
He's only here because we feel obligated to do so, but conventional logic says neither side should be considering a divorce just yet. With that said, it isn't unreasonable to consider that Rodgers could retire should he and GB win it all this season. If the trade talk does come back into the fold, here's the deal. There's $26.8M of dead cap on the contract next year, which could split up unto $19.1/$7.6M over two years if a trade is done after June 1st, but that seems highly unlikely. An early trade frees up $19.3M of cap space, $26.9M of cash (and sends the entire organization into shock).

Randall Cobb (WR, 31)
Cobb was actually highly productive (as Rodgers expected), returning to the Packers' system. They may have to restructure/keep him if Aaron requests it, but a $9.6M cap hit seems too rich on the surface versus the $6.8M to be saved by moving on in some fashion.

Za'Darius Smith (OLB, 29)
It doesn't seem reasonable that Za'Darius, Preston Smith, & Rashan Gary remain together through 2022, especially since they currently account for a whopping $53M of cap next season. An extension for Gary, and a restructure on one of the Smith's seems logical. There's $15.75M to free up by moving on from Za'Darius, and $12.5M by moving on from Preston. 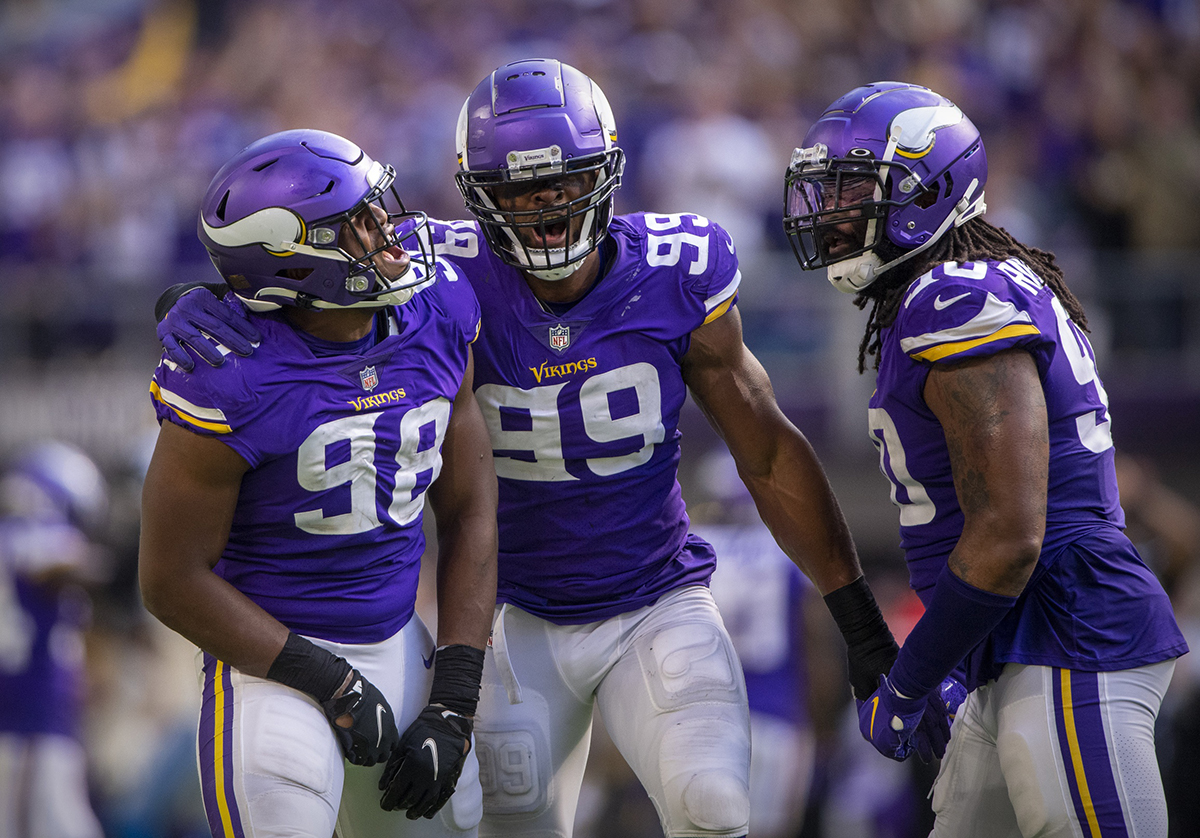 Kirk Cousins (QB, 33)
Cousins has had Top 5 production across many statistical categories in 2021, but the wins just aren’t there to back them up. With that said, he’s entering a contract year in 2022, with a $45M cap hit to boot. In some fashion, this contract is getting addressed over the offseason (trade, restructure, extension, etc…).

Xavier Woods (FS, 26)
The veteran FS is on pace for his most productive season ever, playing on a slightly above minimum contract for 2021. If he’s primed for a starting role in 2022, a $4M per year deal becomes his baseline.

Kirk Cousins (QB, 33)
Statistically speaking, Cousins has never disappointed, but his contract becomes daunting when stacking it up against big wins, and playoff appearances. With 1 year, $35M (fully guaranteed) left, this is still a very tradable contract, and it stands to reason that a few calls could be made in that regard. Minnesota would take on $10M of dead cap with a trade away, freeing up $35M of cap and cash in the process.

Danielle Hunter (DE, 27)
Hunter missed the entire 2020 season (neck), and half of 2021 (torn pec), with injuries so there's a long road ahead still. Factor in a $26.12M cap hit for 2022 (thanks to an $18.5M roster bonus), and it's a certainty that something is forthcoming with the edge rusher's contract. At this point, a trade then restructure still seems feasible, a move that would leave $7.4M of dead cap with Minnesota, freeing up $18.64M of cap space.