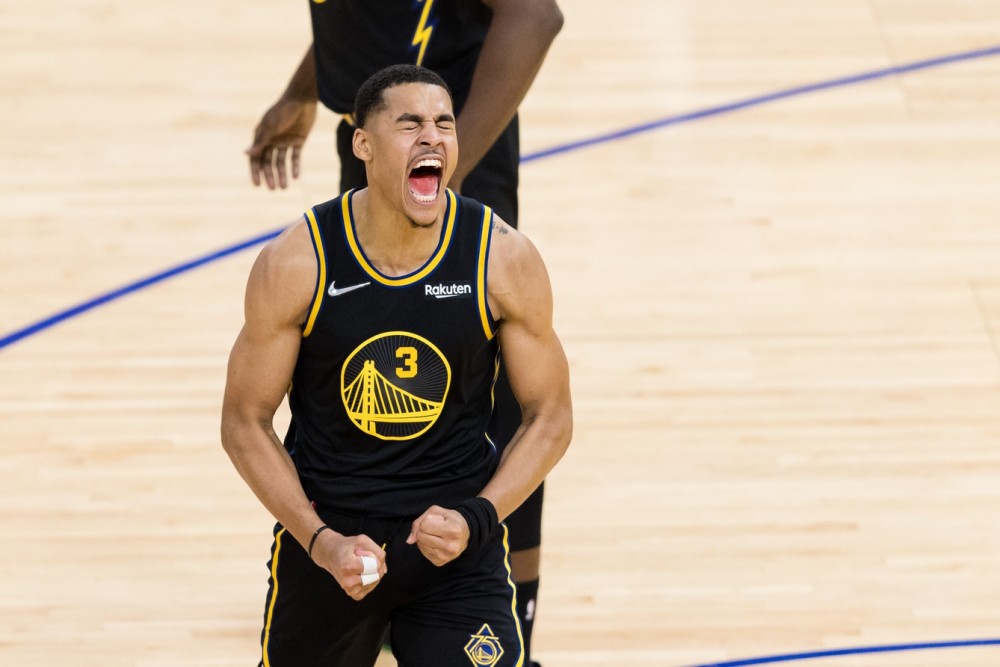 Much like Tyler Herro of the Miami Heat, Jordan Poole is turning in a terrific season right before he’s rookie extension eligible. Enough so that he’s become a main topic of conversation during the NBA Playoffs. Unlike Herro, Poole isn’t a Sixth Man of the Year candidate, mostly because he’s started 51 of the 76 games he’s played this season. That’s continued over to the playoffs, as the Golden State Warriors have brought Stephen Curry off the bench, while he’s on a minutes’ restriction.

Now the Warriors face some decisions with Poole. This offseason, he’s extension-eligible for the first time. This season, Golden State will pay over $170 million luxury taxes and repeater penalties alone. That’s on top of over $175 million in salaries. That’s just shy of $350 million in salaries plus taxes for one season. That’s going to factor into a possible extension for Poole. Either with how much the team is willing to pay or with future roster decisions down the line.

The first thing the Warriors have to do, before figuring in anything related to potential future tax bills, is set their walk-away price for Poole. What’s his role on the idealized version of this team and how much is that worth?

Before we get into the numbers, let’s ground everyone on Poole’s stat-line from this past regular season. He averaged 18.5 points, 3.4 rebounds and 4.0 assists per game. Poole also had good shooting splits. He was at 45% from the floor and 36% from behind the arc on 7.6 three-point attempts per game. He also led the NBA in free throw shooting at 92.5% on 3.5 attempts per game.

Poole has also been fairly healthy throughout his career and works well in the Warriors defensive scheme. And he maintains his efficiency, even if his volume drops, as a reserve vs as a starter. Overall, Poole is a very valuable player to a Warriors team. This is especially true when you consider that team’s veterans are at a stage where it’s fair to expect them to miss chunks of each regular season.

Poole is highly unlikely to get the full max, but it’s worth covering for the extreme high-end estimate.

Here’s what the full max extension would look like for Poole:

One other option that’s worth considering, and something we pitched as a thought for Herro, is the idea of a below max extension, but with bonuses that could bring it to a max. It can be hard to put exact figures to it, but this is essentially what the Boston Celtics did in Jaylen Brown’s extension. Brown’s guaranteed money is below the max, but he has performance and team success language that can push his salary up close to max money. That could be a way for Warriors and Poole to split the difference if he wants more money than the team is willing to guarantee.

If the Warriors and Poole can’t come to an agreement on a deal, they can delay the decision and play things out during the 2022-23 season. In that case, Poole would be eligible for restricted free agency in the summer of 2023.

Nothing would change as far as the deal Golden State could offer Poole, as far as the max goes. That number remains the same. But both sides will have the benefit of another season of data. Maybe Poole doesn’t see a long-term fit with the Warriors as a fourth or fifth wheel. Maybe Golden State finally hits their limit tax-wise and decides they have to let Poole go. Neither seem very likely, yet both are possible.

We’re going to cover this here, because it’s as good a place as any: Poole isn’t a candidate to sign the Qualifying Offer and hit unrestricted free agency in 2024. Poole will likely meet Starter Criteria (via the 2,000 minutes played criterion vs the 41 games started criterion), which will bump his QO. Instead of $5.8 million, Poole could sign the QO for $8.5 million. But that’s not enough for a player of his caliber.

Like Herro, there are no signs Poole has any sort of adverse relationship with the Warriors that would cause him to want to leave town so badly that he’d sign the QO.

Leaving For Another Team

Let’s say things do go sideways for some reason between Poole and Golden State. He could sign with another team as a restricted free agent. That offer sheet would look like this:

This is a four-year max deal with 5% raises. Generally, an offer sheet includes all the bells and whistles to entice the incumbent to let the player walk. This deal would likely include a 15% trade bonus, a player option on the fourth season and probably some up-front actual payments. The idea is to make it so that it’s as uncomfortable as possible for the incumbent team to match.

Given that the Warriors have no path to replacing Poole, due to their taxpayer status, they likely wouldn’t let it get to this point. If Poole was set on leaving, Golden State will look to work a sign-and-trade to recoup something for losing their young player. The Warriors have done this in the past, most recently with the Kevin Durant-D’Angelo Russell double sign-and-trade transaction when Durant wanted to go to the Brooklyn Nets.

Poole doesn’t seem like a max player, unless it’s a team trying to force the Warriors hand in restricted free agency. He’s very good, but he’s not quite a max player. Something like this might be more palatable:

That seems more reasonable, factoring in Poole’s current status, age and potential improvement projections. This contract would also have the benefit of being far more tradable than a full max, should that need arise.

The Extension After a Trade

We’ll cover this one pretty quickly, as it would look exactly like the max or middle-ground extensions with Golden State would. Trading Poole this offseason seems unlikely, but it’s worth noting that things would look the same if he was traded and then inked an extension with a new team.

In the end, the Golden State Warriors probably aren’t letting Jordan Poole get away. While James Wiseman and 2021 first-round Jonathan Kuminga were once seen as the key bridge pieces to the post-Splash Brothers and Draymond Warriors, Poole is an even more sure thing for the future.

Because Golden State intends to be contenders for whatever time Stephen Curry, Draymond Green and Klay Thompson have left, they won’t let talent just get away. Poole is as important of a player as there is on the roster, because he allows the Warriors to manage Curry’s and Thompson’s minutes.

Yes, re-signing Poole will make the 2023-24 Golden State Warriors ridiculously expensive. Here’s what they’ve already got on the books for that season:

That’s nearly $145 million for six players. For reference, the luxury tax line that season projects to be $156.5 million. That means any sort of reasonable deal for Poole, plus filling out the roster, will lift the Warriors over the well over the luxury tax, which will continue the harsh repeater penalties once again.

But that’s nothing new for Golden State. Such is the cost of extending a dynasty for as long as you can.