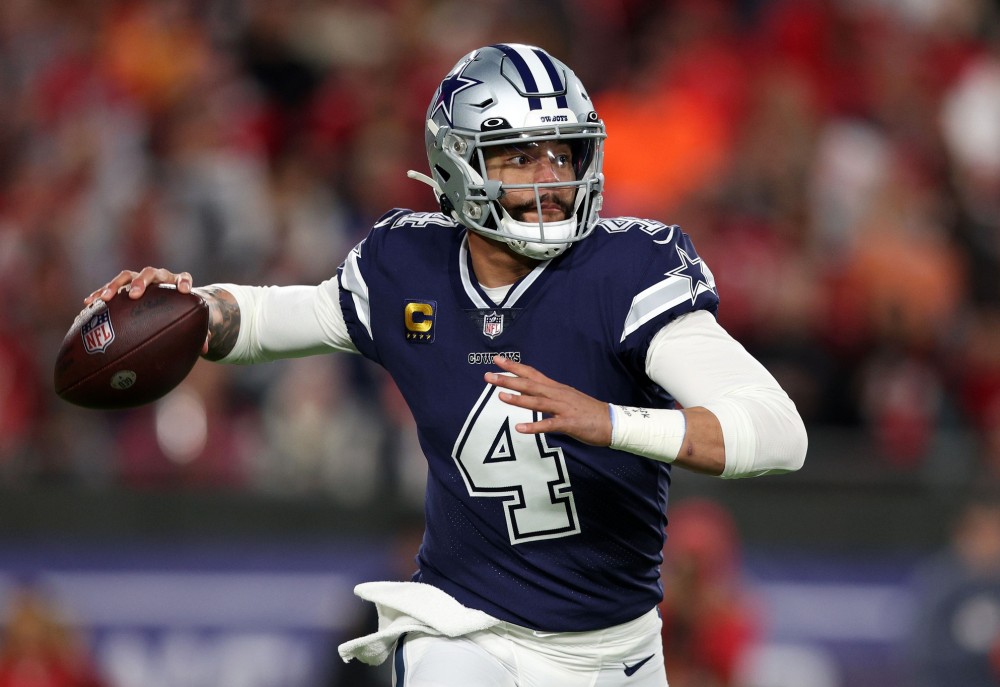 With their loss to the San Francisco 49ers, the Dallas Cowboys now enter offseason mode, projecting to carry around $6M of Top 51 cap space, including 5 players with hits north of $13M next season. We’ll dive into each position group, breaking down contract statuses, potential restructures, extensions, cuts, & more.

Dak Prescott enters Year 3 of his 4 year, $160M contract, including $31M fully guaranteed next season. His cap figure skyrockets to $49.1M for 2023, putting the Cowboys in another difficult financial position. Dallas has already restructured the Prescott deal twice, piling up future cap hits and dead cap counts. Converting $26M of his next year salary into signing bonus can free up over $20M of cap space, but it means $60M of dead cap now tied to a non-guaranteed 2024 season - and $37.4M of dead cap tied to a voidable 2025.

We’ll know a lot about the Cowboys’ confidence in Dak by mid-April. If Dallas goes light (or not at all) on restructuring the 2023 cap hit, it’s a sign that they have reservations about his long term status.

Behind him, Cooper Rush is a pending UFA & Will Grier holds a non-guaranteed $1.08M.

Despite remaining a fan favorite (and potentially a front office favorite), Ezekiel Elliott’s massive contract finally gets right side up in 2023, meaning the Cowboys can actually save cap space by moving on. Elliott holds 4 non-guaranteed years at $52.9M total, and a $16.72M cap hit for 2023 (2nd most in all of football). Dallas can free up $4.68M of space by moving on before June 1st, $10.9M if the move is processed after June 1st.

Behind (next) to him, Tony Pollard hits the open market with an awful broken fibula injury attached to him. His rise to RB1 production had him valuing toward a 3 year, $27M contract in our system, but that’s now TBD based on his health. It’s possible that Dallas slaps an estimated $10M franchise tag on him next month to lock in his roster spot - especially if moving on from Elliott is also in their plans.

Youngster Malik Davis has a minimum salary deal for 2023.

Status: Amari Cooper for a 5th

Just a reminder that Amari Cooper was trading to the Browns for a 5th round pick, and a 6th round pick swap.

CeeDee Lamb is now extension eligible to the first time, and padded his market value nicely in 2022. The 23 year old now projects to a baseline 4 year, $90M extension in our system, though A.J. Brown’s $25M per year is very much in play here.

2022 4th rounder Jake Ferguson could move into the TE1 role next year, though bringing back Dalton Schultz (pending UFA) or adding an offseason vet should very much be in the cards.

Elsewhere, Noah Brown, T.Y. Hilton are all slated for free agency this March.

Status: Tyron on the Bubble?

2022 1st rounder Tyler Smith has all but secured the left tackle position going forward, and his 3 year, $5.7M + 5th year option in 2026 contract certainly equals great value in that regard.

Former blindside tackle Tyron Smith missed most of 2022, and has only been active for 17 games over the past 3 seasons. He took over right tackle duties upon returning, but enters a contract season in 2023, set to earn a non-guaranteed $13.6M, with a $17.6M cap hit. Dallas can free up $9.5M of cap by moving on this March. He’s one of the better roster bubble candidates across the league this offseason.

Left Guard/Center Connor McGovern is a pending free agent, while Tyler Biadasz, who started 16 games this season, enters the final year of his rookie contract.

One of the better groups in all of football remain under contract through 2023. Micah Parsons enters Year 3 of his rookie deal, and becomes extension eligible after the upcoming season (get your orders in affair Jerry).

2018 4th rounder Dorance Armstrong enters a contract year in 2023, coming off of his most productive season to date (6.5 sacks, 33 tackles, 1 forced fumble). There’s $4M to be saved here by moving on, but his $7M cap figure should be fair value based on his recent output. He becomes even more valuable with Dante Fowler Jr. slated for free agency behind him.

Vets Anthony Barr & Leighton Vander Esch are both pending UFAs, leaving 2022 5th rounder Damone Clark & 2021 4th rounder Jabril Cox as the only off-ball linebacker options under contract. Dallas could stand to improve here, though they won’t necessarily be able to break the bank in order to do so.

This time last season, Trevon Diggs was on a fast track to getting his early contract extension. While his overall production predictably came back down to earth (59 tackles, 3 INTs) it’s his inconsistency in coverage that really has many questioning the path forward (nearly 70% of balls thrown at him were caught). Dallas is probably ok seeing one more season to get a better picture.

Anthony Brown was on his way to securing a 3rd contract with Dallas before an achilles tear. He’s slated for free agency this March. His replacement DaRon Bland wound up being one of the better stories on the roster, as the 2022 5th rounder picked off 5 passes this past season. He’ll enter Year 2 of his value rookie deal next season.

Both safeties, Jayron Kearse & Malik Hooker will enter contract years in 2023, and both have a case for extensions. Dallas is thin at this position, so tacking on a few years to these vets while also replenishing this pool via the draft makes a lot of sense this Spring.

Kicker Brett Maher is an expiring contract and it seems impossible he returns to Dallas anytime soon. Punter Bryan Anger holds a 2 year, $5.2M contract, with $1.2M of that becoming fully guaranteed March 19th. The Cowboys can open up $1.4M of cap space if they decide to move on prior to that.