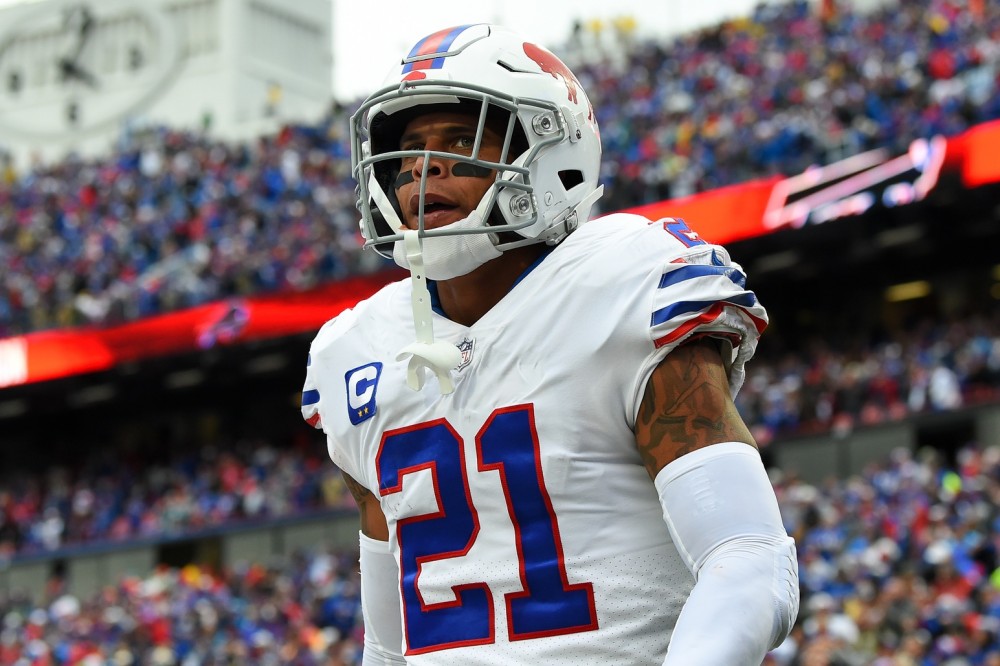 Josh Allen skids into the postseason having battled injury & poor play down the stretch, but (obviously) remains the key piece to Buffalo’s puzzle going forward. Contractually speaking his deal contains early vesting guarantees through the 2025 season, with $97.5M to be earned over the next three seasons. His $39.7M cap hit for 2023 ranks 4th in the NFL, making him a restructure candidate this March. A full base salary conversion can open up over $21M of space for the Bills in 2023.

Behind him Case Keenum is a pending free agent, having taken just 24 regular season snaps for the Bills in his 1 season.

RB1 Devin Singletary heads to the open market this March with a $5.5M valuation attached to him. He joins a large list of potentially available halfbacks this free agency.

2022 2nd rounder James Cook holds 3 years, $3.7M remaining on his rookie deal, and is likely thrust into a much larger role next season. Deadline acquisition Nyheim Hines has 2 more years left on his deal, but not of the $10.2M available carries an early guarantee, and the Bills can free up $4.8M of 2023 space by moving on. Hines probably sticks next season with a small restructure for cap purposes.

There’s a dream world where a Miles Sanders type player steps into this offense and balances it out immediately, but there’s another, simpler, more likely world where Buffalo brings in an Alexander Mattison type at a near minimum salary to better serve their financial bottom line.

Gabriel Davis holds a non-guaranteed 1 year, $1M contract which should represent decent value - even if the Bills drop him down the depth chart a bit with a signature WR add this offseason.

Youngster Khalil Shakir enters Year 2 of his rookie contract, with 3 years, $2.9M non-guaranteed remaining. His role continued to grow as the regular season aged on, and he could be developed into an important piece of the puzzle this summer. Isaiah McKenzie more than doubled his production from 2021->2022, finishing with 4 TDs and over 10.1 yards per reception. His role seemed to be reduced heavily down the stretch though, and Buffalo can free up $2.2M of space by moving on in some capacity.

Don’t be surprised if Buffalo makes a big add here, potentially via trade. This is a win now team without time to “see how it develops”.

Lightly In for a 2

Behind him, Quintin Morris is on a minimum salary, while Tommy Sweeney is slated for free agency. If Knox is going to remain a more down field threat in the passing game, a block first, short yardage TE2 is on the wishlist.

Left Guard Rodger Saffold is slated for free agency (leaving behind $2M of dead cap), while Center Mitch Morse is a roster bubble candidate, as his release can open up $6.3M of space. The 30 year old is one of the locker room leaders on this team, but with Ryan Bates able to slide over to the center position from his current right guard slot, Buffalo may opt to get out of this contract.

There’s an addition or two to be made here, with a 1st round selection this April very possible.

Ed Oliver enters his fully guaranteed $10.75M 5th year, putting the Bills in a tough spot as he heads toward a contract year. He seemed a slam dunk to be (mildly) extended heading into the 2022 season, but there’s argument to be made that the production and consistency just doesn’t warrant it.

Tim Settle offered limited production in a limited role, and his near $5M cap hit likely falls off freeing up $2.2M. DaQuan Jones is half fully guaranteed and sticks around.

The Bills have other needs (WR2, ILB, S, G/C) but finding a run stuffer in the middle that doesn’t break the bank has to be in the conversation.

Greg Rousseau enters Year 3 of his 5-year rookie contract, set to earn a fully guaranteed $1.7M. He posted 7 sacks in 12 2022 games, and should be asked to do even more next season. The same might not be said for 2020 2nd rounder A.J. Epenesa, who enters a contract year in 2023, set to earn a non-guaranteed $1.4M. He’ll enter March as a trade/cut candidate in our book.

2022 3rd rounder Terrel Bernard saw limited work in his first campaign, but could be asked to step into much bigger shoes if pending free agent Tremaine Edmunds isn’t retained. Edmunds finished his best season to date, but his 5 years in Buffalo were inconsistent to say the least, putting him on an $11M valuation heading toward the open market. Many believe he’s a $17M per year player when it’s all said and done. Edmunds backup A.J. Klein is also headed back to free agency.

Tre'Davious White only saw action in 6 regular season games as he worked his way back from a torn ACL. He’s more than half guaranteed ($6.35M) through 2023 right now, while the remaining $3.25M locks in March 19th. White’s contract gets right side up after the upcoming season, meaning the Bills will have an out if they feel like he can’t return to All-Pro form.

Kaiir Elam enters Year 2 of his 5 year rookie contract, set to earn a fully guaranteed $1.3M this season. He held his own in 12 games of action, grabbing 2 INTs in his rookie campaign, and is likely asked to take over the full-time RCB starting role next September.

Behind them, Dane Jackson is headed to restricted free agency, with a projected $2.6M tender in front of him. Taron Johnson enters Year 3 of a 4 year deal, set to account for $9.215M of 2023 cap. There’s $4.2M to be saved by moving off of that contract, but Johnson seems too valuable to give up on this March. A small restructure to free up some space makes sense here.

The safety position might hold the most question marks on this roster going forward, as Jordan Poyer is now set to hit the open market (values at $11M per year), and Micah Hyde gets set to return from a season long neck injury, on an expiring 1 year, $7.2M contract ($10.5M cap hit). It’s tough to imagine the 32 year old getting another contract in Buffalo, but the Bills can open up $4.5M of cap space by processing a full cash conversion.

Behind them, Damar Hamlin’s return is obviously in serious question (2 years, $2M non-guaranteed remaining on his contract), while Siran Neal holds a non-guaranteed 2 year, $5.5M deal.

K Tyler Bass made 87.5% of his field goals for the 2nd straight season, cashing 43/45 PATs as well. The 6th round pick enters a contract year in 2023, and should be considered an extension candidate. He projects to a 4 year, $19.2M contract in our system.

P Sam Martin had his lowest number of attempts in 6 years, and is headed to free agency this March, while LS Reid Ferguson is under contract at a non-guaranteed 2 years, $2.2M.