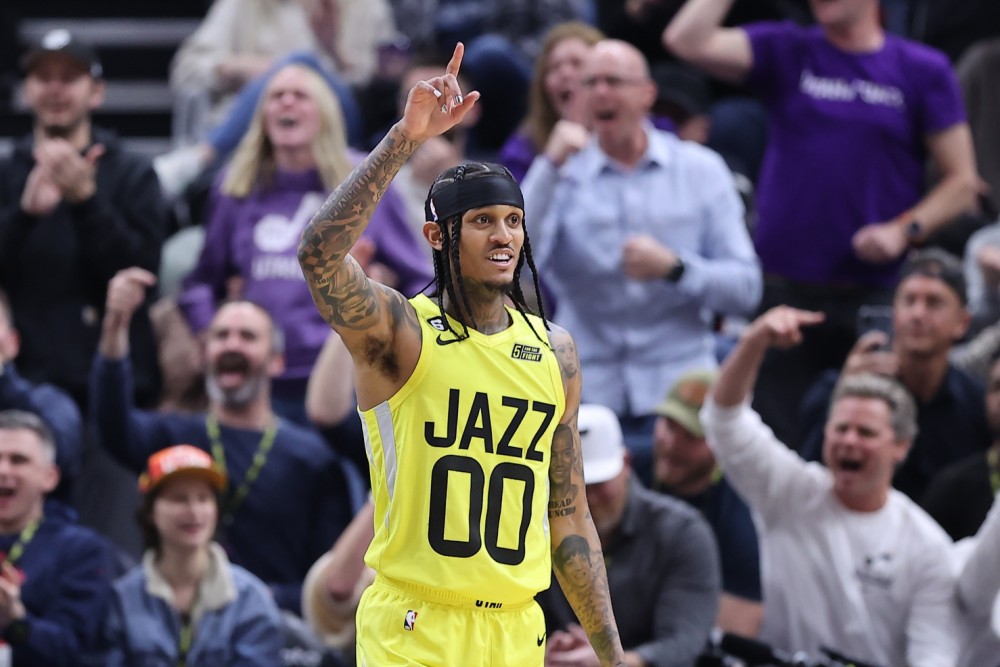 After trading Rudy Gobert and Donovan Mitchell, the prevailing wisdom around the Utah Jazz was that veterans like Jordan Clarkson, Mike Conley and Rudy Gay would be next to go. Instead, the Jazz hung on to those veterans and have been better than expected halfway through the NBA regular season.

Clarkson, in particular, has had a really good year. He’s also become a leader for a somewhat young Utah roster. Clarkson’s play and leadership have brought enough to the team that reports are the Jazz are more likely to extend him than they are to trade him.

In his ninth NBA season, Clarkson is averaging a career-high 20.7 points per game, while playing the most minutes of his career. As a full-time starter for the first time since his sophomore season, Clarkson has maintained, or lifted, his shooting percentages, while also averaging career-bests in rebounds and assists.

Let’s take a look at what Clarkson could get by extending with the Jazz and what his next deal could look like if he were to push his decision to free agency.

In this scenario, we’ll look at Clarkson declining his 2023-24 option, in order to add four years.

That’s a 20% bump off of Clarkson’s $13.34 million salary for this season. He’d also be eligible for 8% raises, which is also reflected here.

For this season, a $16 million salary would rank 22nd among NBA shooting guards. That would see Clarkson nestled right between Norman Powell of the LA Clippers and Jazz teammate Malik Beasley.

If we flip it ahead one season, at $16 million, Clarkson would be 27th in the NBA among shooting guards. That’s right behind Beasley and just ahead of Kevin Huerter of the Sacramento Kings.

Not bad company for Clarkson in either spot. Powell, Beasley and Huerter are all solid score-first guards. Huerter is a regular starter, while Powell and Beasley both come off their bench for their teams.

But even in that company, could Clarkson do better in free agency?

Re-signing with the Jazz as a free agent

Utah has full Bird rights for Clarkson. That means that they could offer him up to the max. For posterities sake, here’s what that would look like for Clarkson as a nine years of service player:

Now, Jordan Clarkson isn’t getting that much in free agency. He’d be the third-highest paid shooting guard in the NBA at $40.2 million, behind only Bradley Beal, Paul George (who is also kind of a small forward) and Klay Thompson. Good as he is (and as overpaid as a couple of those guys may be), that’s not the kind of player Clarkson is.

So, while it’s nice to have a high-point salary as a high-end marker, that’s all it is.

Here’s the most a rival team could offer Clarkson:

That’s the same 30% of the cap in first-year salary, but the max another team can offer Clarkson is four years and 5% raises.

This deal serves as a nice comparison point for Clarkson’s potential extension with Utah. In theory, Clarkson would be leaving $100 million on the table. In reality, it’s more of another high-end marker that Clarkson won’t come anywhere close to.

Even if we’re trying to tamp down expectations a bit for Jordan Clarkson on his next deal, doing an extend-and-trade or an extension after a trade aren’t in range for him. He’d only be able to add a 5% bump off his current $13.34 million salary in Year 1 and then 8% in Year 2. Either situation would look like this:

Adding $29.1 million isn’t bad, but that’s less money in Year 1 of this extension than Clarkson would make by simply picking up his player option.

And Clarkson can’t extend after a trade, because any extension that would go beyond what’s allowable in an extend in trade would have to wait for six months. That would take us past the opening of free agency, and Clarkson would be better off to just opt out and re-sign with any team that traded for him.

Jordan Clarkson is having a great season. If the Jazz record were a bit better, he’d join teammate Lauri Markkanen in garnering All-Star consideration. It’s easy to see why Utah is thinking extension vs trading Clarkson.

On the flip side, Clarkson is turning in a career-year in his age-30 season. His last two full seasons in Utah, Clarkson shot 42.2% overall and 33.3% on three-pointers. And on a contender, he’s probably a combo guard coming off the bench.

But let’s not pretend that good bench scorers don’t have value. Two of Clarkson’s best career comps are Lou Williams and Jamal Crawford. Williams had a 17-year career as primarily a bench scoring guard, while Crawford went for a whopping 20 years in that role. Having the remainder of his career play out like two of the preeminent sixth men in NBA history is a good goal for Clarkson.

Given his age, and factoring in that this is probably a career-year and not a new baseline, we can split the difference on what is fair for Clarkson’s next contract. And we’ll also factor in that he’s a valuable player as a reserve of a starter and that his scoring is a skill that gets players paid.

With all that we know, the Jazz would do well to simply extend Clarkson now. He’d get roughly $18 million AAV and that’s pretty fair value. Utah would do best to try to keep it to three years and $52 million, as opposed to four years and almost $72 million, but that’s just to protect against age-related regression.

However, for Clarkson, that’s probably right on the border of it being worth testing free agency. The free agent class this summer is weak enough that there is likely to be more money available than players to reasonably spend it on. Only James Harden, Kyrie Irving and maybe Khris Middleton are max contract guys this summer, and they are all more likely to re-sign where they are than to leave. That leaves a lot available for everyone else.

Clarkson is a primary player among that “everyone else” group. It’s not a stretch to see a team offering him a three- or four-year deal in the $20 million AAV range.

With that in mind, it’s probably best for Jordan Clarkson to finish this year strong, opt out and see what free agency has to offer. Utah loves Clarkson and he seems happy there. Whatever the Jazz can offer him in an extension should be there this summer, and Utah can beat any rival’s offer too. If Clarkson can leverage his way into a bit more salary in free agency, so much the better for him.