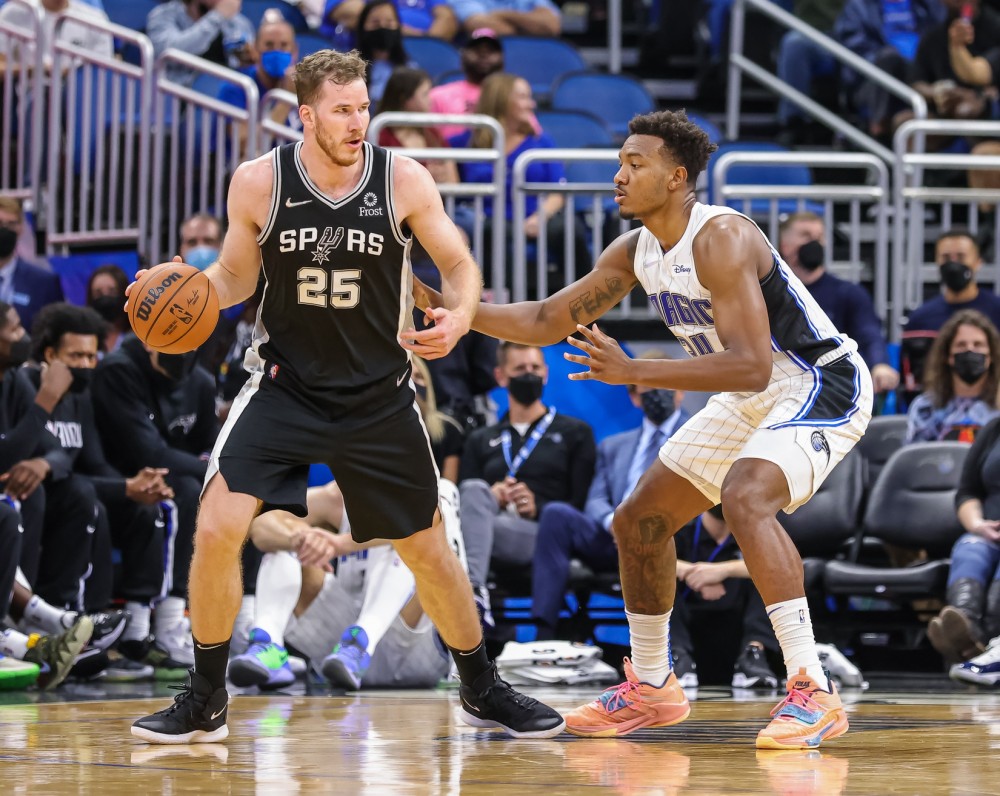 When the San Antonio Spurs re-signed Jakob Poeltl to a three-year, $26.25 million in 2020, they were betting that the flashes he showed would become regular production. So far, so good on that bet for the Spurs. Poeltl has become a solid finisher around the rim, while continuing to up his rebounding and rim protection.

Now, it’s time for Poeltl’s next deal. But that’s a little more complicated than it might seem.

Like some others we’ve talked about in this series, including Jaylen Nowell and Naz Reid, Poeltl is signed to a team-friendly deal. That’s great for the Spurs in the moment, but that limits how much Poeltl can extend for.

Let’s start with the simplest question: Is Jakob Poeltl worth extending? This should be a resounding yes. Poeltl just turned 27, which means he’s entering his prime years as a center. He’s one of the better rim protectors in the NBA. And he’s a top-tier rebounder. As stated above, he’s improved his finishing and his moves around the basket. Poeltl is also a better passer than you think. Yes, his free throw shooting is poor, but there are maybe some signs it’s improving (he’s edging closer to 60% this season).

Add it all up, and Poeltl is going to get paid. It’ll either be by the Spurs or someone else, but he’s going to get a nice new deal. Let’s examine what that new deal could look like.

As we wrote about extensively in the Nowell and Reid piece, Jakob Poeltl is eligible for the Dinwiddie Extension. Because his contract is so team-friendly, Poeltl is eligible to sign for up to 120% of the estimated average salary in Year 1 of an extension. That extension can include up to 8% raises could be for up to four years. It would look like this:

That’s just about $14.5 million per season. For reference, that would put Poeltl at 15th in terms of Average Annual Value for all centers. He’d be nestled right between Mitchell Robinson at $15 million and Brook Lopez at $13 million.

That seems maybe a tad low. When you consider where the cap is headed, plus the value teams place on rim protection, Poeltl should be able to pull in more than $14.5 million per season.

There are a number of contenders who would probably love to send a draft pick to the rebuilding San Antonio Spurs for Jakob Poeltl. It’s likely that pick, and possibly a player, sent to the Spurs would be even better if Poeltl was already locked into a new contract and not a pending free agent.

That’s where the extend-and-trade comes into play. However, there are limitations that probably make this a no-go for Poeltl.

In an extend-and-trade, the total contract is limited to only three seasons. Thus, Poeltl could only add two seasons onto his deal, because the current season counts towards the three seasons allowed. That part probably isn’t the end of the world.

Where things would break down is that the extension is only allowed to have a 5% raise over the final season of the current contract. In Poeltl’s case, that would make a new extend-and-trade deal look like this:

If $14.5M million AAV isn’t enough, then roughly $9.8 million AAV certainly won’t be enough. That’s less than the Non-Taxpayer MLE and some contender without hard cap worries would certainly sign Poeltl to a deal for the full MLE.

Extending after a trade

If Jakob Poeltl was to be traded to another team, he could still extend with that team. Unfortunately, he’d have to wait six months to sign an extension which is larger than the extend-and-trade scenario laid out above. That makes timing really, really important to watch as to when Poeltl would theoretically be traded.

And, in that extension, the acquiring team would still be capped at offering the Dinwiddie Extension. That contract would look exactly the same as laid out above.

Re-signing with the Spurs as a free agent

The most likely course of action for Jakob Poeltl seems to be to let things play out to unrestricted free agency. It’s the only way for him to get a contract that’s worth more than $58 million over four years allowable by the Dinwiddie Extension.

For reference, a max deal (which isn’t happening for Poeltl) would be:

That’s obviously not going to happen, no matter how much of a Jakob Poeltl fan you may be. But it does set an absolute top-end range for negotiations. That’ll come in later.

Let’s say Jakob Poeltl and the Spurs are ready to part ways. Then he’d be eligible for the following max deal from another team:

Again, this isn’t anything Poeltl will get as a free agent, but now we have our ranges set. And that’s where the negotiating comes in.

So, our window ends up being somewhere between $58 million and roughly three times that amount at $173 million.

That’s a pretty big range for negotiations. That leaves us to finding recent comps to work off of. We already said that the $14.5 million per year that Poeltl could make via the Dinwiddie Extension seems a bit low. So, let’s look at the next few players on the highest paid centers list.

That’s not a bad list of comps for Poeltl. He’s younger than a few of those players, older than a few others, but in range with all of them age-wise.

Production-wise, Poeltl is a better defender than most of the list. He’s a better rebounder the, or on par with, the entire list. Offensively, Poeltl is probably the equal to all but Myles Turner (his shooting ability sets him apart) and Jusuf Nurkic (the best all-around player of this bunch).

Now, we have our comp list and their average salaries on their current deals. If we factor in a slight upward-ness in salary, because the cap is climbing, we can land at a what seems like a fair value for Poeltl of about $18 million AAV.

One last thing to note, Mitchell Robinson’s contract is frontloaded and descends year over year. That could be a smart structure for the Spurs to take if they re-sign Poeltl. They won’t likely need the extra cap space in the next year or two, but could down the line. And having Poeltl on a lower number in the further out season will keep him a very tradable asset.

A reasonable middle ground deal could look something like this for Poeltl:

That would be a max decline of 8% from year-to-year over the life of the deal, while hitting almost exactly at $18 million AAV.

It doesn’t really make sense for Jakob Poeltl to sign a Dinwiddie Extension right now. He’d likely be leaving money on the table. If the San Antonio Spurs could get him to ink that sort of extension, that would be a major win for them.

Instead, it makes sense for both sides to let things play out. If the Spurs want to go full cap space, they can just let Poeltl leave this summer. If they see him as a part of the future, they can still beat any offer that any other team can offer him. And, they can do so while keeping Poeltl on a still-tradable contract too.

Rim protectors that can rebound and aren’t a complete zero on offense, are very valuable players. Poeltl is set to be one of the better free agents available this summer, in addition to being one of the top available centers. That’s going to get Poeltl paid, whether by the Spurs or someone else.