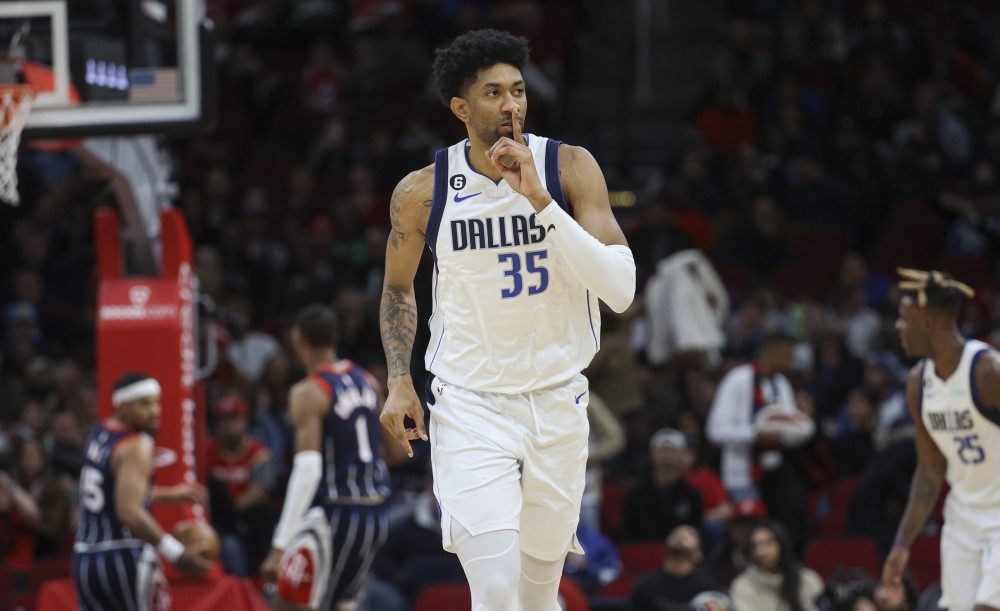 Christian Wood is putting together his best season in the NBA this year with the Dallas Mavericks. Sure, he scored more points and grabbed more rebounds in seasons with the Houston Rockets, but the combination of efficiency and production, along with improved defense, from Wood makes this season is his best one yet.

Wood opened the year coming off the Mavs bench, as they prioritized defense and screen-setting (and maybe keeping a soon-to-be-extension-eligible player’s numbers down a bit) at the center spot to start the season. But over the last seven games, Wood has started at the five and Dallas has taken off. The Mavericks have won five straight, following two close losses, with Wood as a starter.

During those seven games, Wood has averaged 18.7 points, 8.6 rebounds, 2.7 blocks, two assists and a steal per game. Luka Doncic is driving the Mavs success, but Wood is more than just a passenger along for the ride.

This career-best production for Wood comes at a critical time. He’s in the final season of the three-year, $41 million deal he signed a part of a sign-and-trade to the Rockets from the Detroit Pistons. Wood recently became fully extension-eligible with Dallas. He could also wait to cash in as an unrestricted free agent this summer.

Let’s take a look at what Christian Wood’s next contract could look like.

Because enough time has now passed since the trade that sent Wood from Houston to Dallas, he’s eligible to sign a full veteran extension with the Mavericks. That deal would look like this:

That’s a 120% bump off of Wood’s current $14.3 million contract for this season in first-year salary. He can then get 8% raises off that new salary for the subsequent years.

$77 million over four years is an average annual value (AAV) of $19.25 million. For this season, that figure would rank at 69th in the NBA, nestled between Lonzo Ball ($19.5 million) and Caris LeVert ($18.8 million). Among centers, $19.25 million would be 10th in the NBA this season, behind Jarrett Allen ($20 million) and Clint Capela ($18.7 million). Both overall and among centers, that probably about where Wood ranks.

It’s not bad money by any means. But could Wood do better in free agency after a big close to the season?

Re-signing with the Mavericks as a free agent

Dallas has full Bird rights for Christian Wood. That means they can offer him a max deal if they want. That contract would look like this:

Even the most ardent Christian Wood fan would probably agree that’s too rich. An average salary of $46.6 million would make Wood the highest paid center in the league and the third highest paid player in the entire NBA this season.

Let’s say Christian Wood and the Mavericks are ready to part ways this summer. There are nine teams that currently project to have cap space this offseason. A handful could be in play for Wood’s services. Here’s the max an opposing team could offer Wood this summer:

That’s the same 30% of the cap in first-year salary, but the max another team can offer Wood is four years and 5% raises.

If you compare this deal to what Wood can extend for right now, it’s nearly $100 million more in total salary. But, even at a lesser figure than his max with Dallas, $43.2 million AAV is still too rich for Wood.

This isn’t a realistic option for Christian Wood, and it’s part of the reason he hasn’t extended with Dallas yet. In an extend-and-trade, a player can only add two seasons to their deal and they can only get a 5% bump in first-year salary over their current salary. Here’s what that would look like for Wood:

$31.2 million over two seasons simply isn’t enough for a player of Wood’s value.

It’s also not realistic to expect Wood to be traded and then to extend for the full amount he can extend for with Dallas. If Wood was traded, he’d have to wait six months to extend for more than he can be offered as part of an extend-and-trade. That would take us to the start of free agency. Thus, any team trading for Christian Wood now would do so under the idea they could re-sign him in free agency.

It’s also fair to ask: Why would Dallas trade Wood? The Mavericks wouldn’t just give away their talented big man. But if they can use his contract, plus another one or two, to get that second star they’ve been looking for alongside Luka Doncic, Dallas would do it. The Mavs tend to be aggressive, as witnessed a season ago when they traded Kristaps Porzingis to the Washington Wizards to break up his max contract into two smaller, easier-traded ones.

Christian Wood’s value is a bit tricky to peg. At worst, Wood is an offense-leaning center, but a very good one. But he’s shown this season that he can be more than that. On a team with something to play for, Wood is playing better on the defensive end of the floor than he ever has.

He’s also able to slide over and play the four, alongside the right center. That’s a valuable skill, because it increases Wood’s versatility and doesn’t pigeon hole him lineup-wise.

So, what’s a five, who can play some four, that can get you 20 points per game with solid rebounding, improving passing and defense worth? The answer is somewhere around the $19.25 AAV that the Mavericks can offer Wood in an extension.

This season, 10 centers are making more than $20 million. That number climbs to 12 if you include Kristaps Porzingis and Kevin Love, who both log a lot of minutes at the five.

So, somewhere between $19 and $20 million doesn’t seem unreasonable for Christian Wood, on its face. The challenge then becomes what the free agent market will come to bear for him.

As we said earlier, nine teams project to have enough cap space to offer Wood at least what Dallas can offer him via a veteran extension. Of those nine teams, we can eliminate a few, right off the bat. The Houston Rockets and Detroit Pistons have been there, done that. The Orlando Magic are already overstuffed with big men.

That leaves a group that includes Charlotte Hornets, Indiana Pacers, Los Angeles Lakers, Oklahoma City Thunder, San Antonio Spurs and Utah Jazz. Indiana and San Antonio have their own free agent centers (Myles Turner and Jakob Poeltl, respectively) to deal with. Charlotte seems like they are going to use some of their cap flexibility to re-sign Miles Bridges, and they may not end up having space at all.

That leaves the Lakers, who are probably thinking bigger than Christian Wood in free agency, the Thunder and Jazz. At this point, the Jazz are a mystery box. Who knows what their plans are? Wood makes a lot of sense for the Thunder, but only if they are ready to start pushing things forward in terms of contending for a playoff spot.

There’s also the matter of the center position being the deepest of all of the positions in free agency. As mentioned, Myles Turner and Jakob Poeltl could be free agents this summer. They’ll likely be joined by Kristaps Porzingis, Nikola Vucevic and Brook Lopez, along with several lower-priced veteran options.

It’s at this point that we should mention the possibility of a sign-and-trade for Wood and Dallas. Wood can’t get any more money via a sign-and-trade than he could get by signing with a team outright, but as a non-max player, that’s not really an issue. If there is a team willing to give Wood $20 million or more AAV, they can do it. A sign-and-trade would also help the capped-out Mavs return something of value, as opposed to losing Wood for nothing.

Putting it all together, the $77 million extension over four years is probably fair value for Christian Wood. He might be able to get more than by pushing things to free agency, but it won’t be significantly more. For a player who has made around $45 million in total salary in the first seven years of his career, it could be hard to pass up $19+ million per season.

The real deal may fall somewhere outside the four-year, $77 million extension. It’s been suggested that Wood won’t sign a four-year extension. Maybe he does a shorter-term deal, but still for the max he can extend for with Dallas. Two years and $35.7 million, or a two-plus-one deal of nearly $56 million are both reasonable too.

No matter what happens. Christian Wood is going to get a nice new contract. If it’s an extension with the Mavericks, don’t expect that to come until after the trade deadline. Dallas will exhaust all of their trade options first, as extending Wood for big money would come with a six-month trade restriction.

If a new contract comes in free agency, Wood will probably get north of $20 million AAV, either through a sign-and-trade or an outright signing with a cap space team. And that’s a contract that should hold its value for whatever length it spans for the talented, versatile big man.