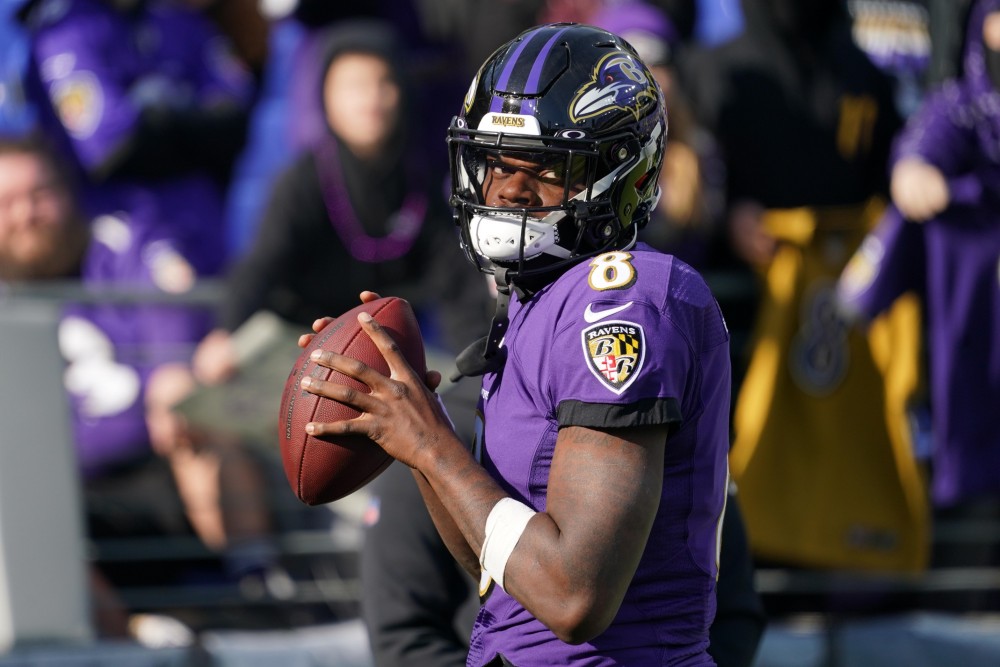 Before we lay out the options here, a few initial thoughts and points. We project the Ravens to enter the offseason with about $32.8M of Top 51 cap space - which is also what we project the non-exclusive franchise tag for quarterbacks to value to. No big deal, Baltimore will just restructure a few contracts and be free and clear for March 15th, right?

Kind of. Baltimore utilizes a double-bonus structure in almost all of their larger contracts, which does the job of spreading the cap out at the time of signing, offering less chance to restructure in big waves down the road. That doesn't mean they can't restructure base salaries and free up space, in fact doing so with Ronnie Stanley & Maron Humphrey can open up more than $16M of room - it just means there's less meat on the bone right now than other teams might have to work with.

This is in no way a claim that the Ravens won't be able to handle a tag for Jackson, rather simply a point that a $32M+ cap hit will be a big deal to this front office ($8M more than any cap hit Baltimore has ever rostered), and it will affect the way they do business in the coming months.

The most likely option (still) is that the Baltimore Ravens slap an exclusive franchise tag on Lamar Jackson this February. Why? Because it gives them absolute control over the situation this spring. Lamar won't be able to negotiate with another team. And if the relationship breaks down, the Ravens can trade Jackson for whatever asking price they wish.

The exclusive QB tag currently projects to cost $45.24M. Except not yet. This exact figure won't be determined until after the restricted tender season ends, somewhere around early April. What does this mean for the Ravens? Baltimore will carry the non-exclusive franchise tag value (projected to be around $32M) until that exclusive price is set.

The exclusive price is based on the Top 5 QB cap hits, workout bonuses excluded. Right now, those 5 figures are extremely fluid, as Deshaun Watson's $54.9M, Dak Prescott's $49.1M, & Patrick Mahomes' $46.8M cap figures are surely to be restructured, while Josh Allen's $39.7M figure is most likely to be converted down, & Ryan Tannehill's $36.6M number might be removed altogether based on his roster status. In other words, let's treat this is as a $32M hit in March until further notice.

The Ravens utilize the non-exclusive tag, currently projected to value at $32M, this February. Why? Because they aren't worried about him signing an offer sheet elsewhere. They'll match it. The idea of him leaving on an offer sheet and Baltimore getting back only 2 first round picks for their QB1 is moot, because the Ravens simply won't let it get to that point. What's the thinking then behind this move? Let's see if another franchise offers what Lamar has been holding out for - a fully guaranteed, Deshaun Watson contract. Be careful what you wish for Baltimore.

Lamar Jackson is offered a franchise tag, but the two sides are already too far apart on negotiation to even get back to the drawing board with it. The Ravens start fielding trade calls and are certain to be seeking something along the lines of the package that Deshaun Watson was valued at last March: Three first round picks, 1 third round pick, 2 4th round picks.

Jackson will need to sign the franchise tag in order to process the trade, so that won't happen until A) He's happy with the team that's agreed to the trade. B) The acquiring team has offered the multi-year extension he's been seeking.

At this juncture, we'd place this option as the favorite in the clubhouse for a variety of reasons.

Jackson and the Ravens agree to a multi-year contract extension in the coming weeks, avoiding the need to use the franchise tag. Here's what matters most to Lamar for this negotiation:

The Ravens likely classify the Watson deal as a standalone bag of trash, which is fine - except agents and players will refuse to. Will the two sides compromise in the middle of the Top 2? Would a 4 year, $200M, fully guaranteed offer get the job done? It's certainly not something we'd expect from Baltimore, but it's at least an option. A contract like this would slot Jackson well ahead of Kyler's guarantee, while also lifiting him to the $50M per year mark (for bragging purposes). The 4 year term might favor Baltimore, as there have to be obvious concerns about his injury history now and going forward. The issue? It's being widely reported that the Ravens' largest guarantee offer was $133M. Miles apart.

If Lamar is tagged (exclusive or non), the two sides will have until July 15, 2023 to negotiate an extension. After that date, Lamar must play on a 1 year deal for the 2023 season.

Lamar Jackson is tagged, the Ravens refuse to trade him, but also refuse to give in on his fully guaranteed contract request. Jackson doesn't sign the tag and the Ravens are now stuck with a $32M+ placeholder all spring and summer (which could rise into the $40Ms if it's the exclusive tag). Their ability to build the roster, and set themselves up for 2023 (especially at the QB position) are now dwarfed.

The Let Him Walk Option

The Ravens decide acquiring draft picks is too much work, vote against restructuring contracts in order to fit a franchise tag for Jackson on their books, and simply let him walk into free agency on March 15th. There are zero worlds where this happens.